Some difficulties with Ortolan Bunting identification

This week I have had the good fortune to see the ortolan bunting at Fan Bay on 2 occasions. The first time getting fleeting and/or distant views and a couple of record shots and the second time getting brilliant views and some pretty good photos.
As this was a new tick for me I've spent a little time looking at what makes this bird an Ortolan and not a Cretzschmars.   Why?.......... Because if I had found this bird myself I’d have had no idea which it was.

There are some references that suggest the juveniles of these 2 species are inseparable in the field. In the tomes where differences are listed these include the beak of the Ortolan being slightly larger than that of the Cretzschmars, the head streaking being stronger, and the eye ring of the Ortolan being yellowish to whitish whereas the Cretzschmars is whitish.
Some of these descriptions might be useful if one was familiar with both birds (which I’m not) or if they were sitting side by side (which they weren’t). I was looking for something a little more absolute.

So I thought I’d share what I saw in the field and what I can see in my photographs compared with what is down in 2 field guides – the “Collins Bird Guide” mainly,  plus some contributions from “The Advanced Bird ID Handbook”.

The overall impression I got of the bird from my first view (rear view only) was of quite a pale bird with the feather fringes being very pale/white with obvious streaking on the mantle, faint but obvious brown streaking on the buff/peachy flanks and with a clear red-brown colouration on the tertials. It was this red brown colouration which got me asking myself why is this bird an Ortolan and not a Cretzschmars: 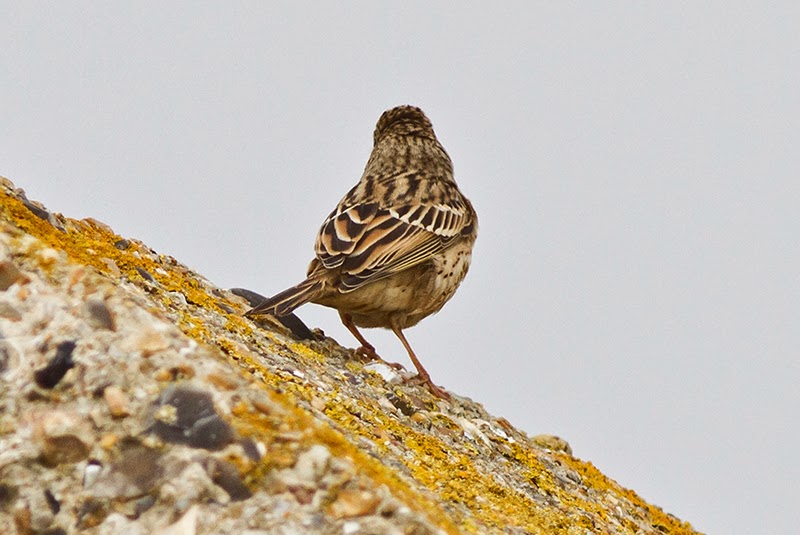 The second time I saw the bird the views were far better and below are a series of pictures to help gauge the overall colour of bird and the colour of the tertials in particular.
The better quality shots were taken late afternoon (around 4.30) in bright sunshine and due to possible colour distortions from the incident light the shots have been processed using 2 different temperatures – Canon’s Daylight,5500C and at 4500C.

I have a number of shots (more distant) that shows the back and rump of the bird. The Cretzschmars is said to have a red-brown tinge to the rump whereas the ortolan is uniform colour along it’s back and rump. Again these shots have been process at 2 temperatures, as shot (5750C) and slightly colder at 5000C (the shots being taken around midday)

From these it is clear that this bird is uniform in colour across the mantle and rump indicative of Ortolan (though it does look warmer than the grey brown bird of the Collins the illustrations).

This close up illustrates some of the other point of possible difference. 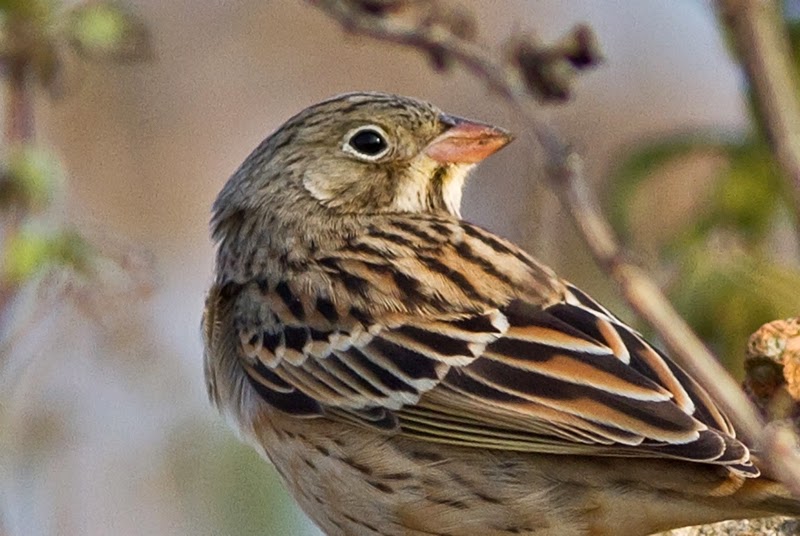 Beak – well it’s pinkish but as to whether the size is of any use in determining species I’ll leave that for you to decide.
Eye ring – whilst not terribly clear I think I’d go along with the eye ring just about having a yellowish tint but whether this is significantly different to the “whitish” eye ring of the Cretzschmars. It's certainly not something I'd bet the family savings on.
Greater and median coverts -when I looked at my pictures in detail I thought the greater and median coverts might present a clear cut difference between the two species. These feathers obviously have very distinct and broad pale fringes -  far more obvious than the Collins illustrations (for either species) though the Advanced Bird ID Handbook states 1st winters of both species can have well defined white tips…. so not as much help as I'd hoped.
Looking even more closely at the coverts you can see they are dark brown with heavy off-white fringes but the brown has a point and there are differences to the detail of the pointy bit between individual coverts and between the greater and median coverts. When searching the internet  I did initially find an illustration of the tips of the coverts of an ortolan bunting but I can no longer find the reference – I think it was in a book review but stupidly I didn’t "book mark" it on the computer. So if anyone has a detailed illustration of the coverts could they send me a reference and/or photocopy?

Breast and flank streaking. Nothing much to say but an image to illustrate. 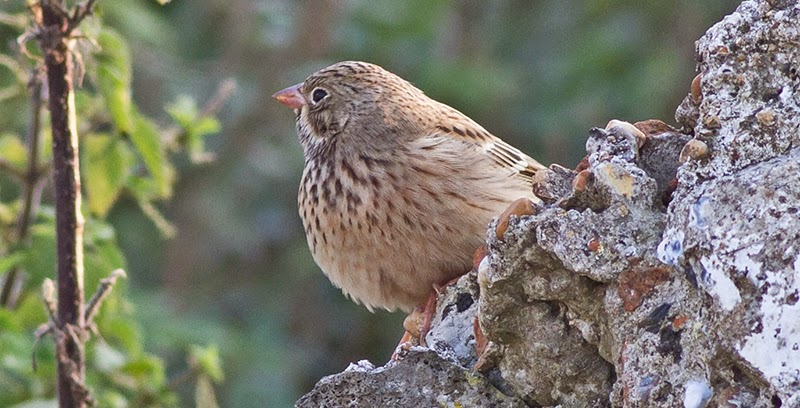 Tail – whilst nothing seems to be said in the text of the two reference books the illustrations in Collins show the Ortolan to have a slightly deeper fork to the folded tail than the Cretzschmars. The Fan Bay bird had a marked fork in its tail. 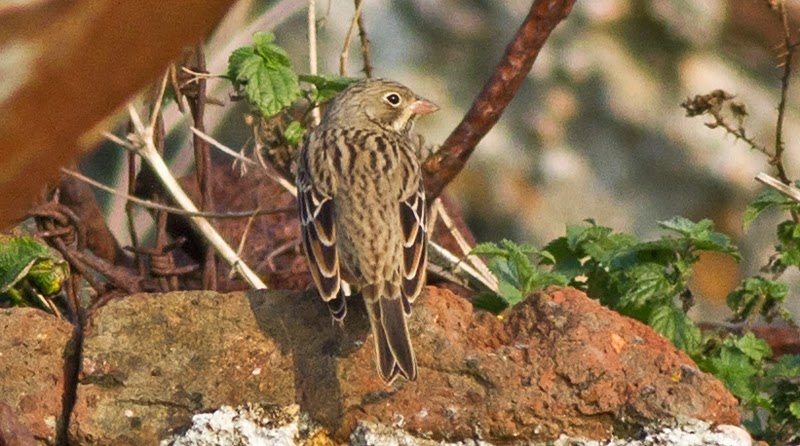 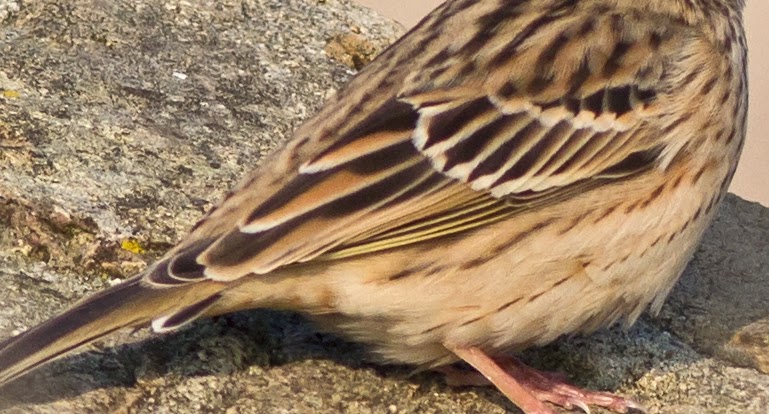 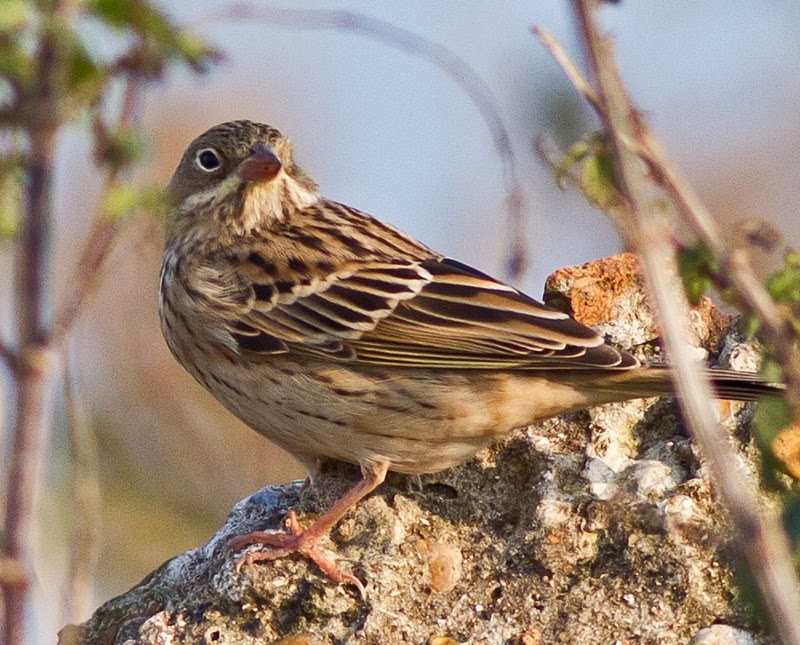 I've posted 2 views of the primaries. Now I calculate the primary projection from this pictures to be around 21% and there are only 2 primaries showing beyond the tertials which would suggest the bird is a  Cretzschmars however looking at the illustration in Collins and a selection of photographs on the web of both the Ortolan and Cretzschmars I'm begining to doubt the generality of the 30-60% PP for the Ortolan. From what I can see  the PP of the Ortolan seems to be quite variable with birds having a PP of between 20-40% (most at the lower end of this range); Where the PP can be seen with the Cretzschmar they to seem to be similar to the Fan Bay bird.

One feature that was noticeable in all my reasonable shots was the yellow tinge to the pale edge of the primaries. It can be seen on both the PP shots and on the general close-up shots above (though it shows better with warmer processing). I've found nothing about this in either of the available tomes

So there you have it. From the images you could say it's probably an Ortolan (mainly on the the lack of a redish rump) but I can't provide unequivocal proof despite having some pretty detailed pictures. I’m not arguing with the id it’s just that I'm still in the position that if I found one I wouldn't be able to say with confidence what I had found.

Finally, on the first day I did hear the bird call twice – a chiup like call. At the time this was of no use because I had no idea of the call of either species however on listening to tapes the calls of the Ortolan and Cretzschmars are quite distinct and I'm pretty sure it was the Ortolan’s call that I heard.

Posted by Greater Kent Birder at 07:21