As most of you will know I've not been out much these last few months but the light is well and truly at the end of the tunnel.
I have been suffering from a stone in my salivary gland and it's a whopper - 1.7cm long and 1.2 cm wide. It's blocked the salivary duct so saliva builds up in the gland and the result is I have a lump on my throat the size of an egg but the real problem has been the infections. Since this started (July 18th) I've had 6 weeks on anti-biotics and a week on antifungals (I managed to get oral thrush; a common problem with prolonged antibiotic treatment).
Anyway I'm to be operated on next week when the salivary gland will be removed and hopefully that will be the end of the matter. It will mean one night in hospital (possibly 2 depending on how much bleeding takes place and when the drains come out.........to much detail?)

Today started at the hospital for a "Pre-assessment clinic" where blood tests, an ECG were run and a lot of forms filled in. After it was over and because the sun was out and because you can park close I drove up to Swalecliff to try my luck with the Lapland bunting.
I've not had a lot of luck with Laplands over the years, I've never found my own one and normally I can't find the ones other people have seen and when I have located one I've either failed to get clear shot or the weather has been poor (normally both).
Anyway as I arrived a guy with a camera was leaving but he told me where it had been - near a white sign -  and where it had gone - out onto the shingle. I could see another case of  "you should have been here 10 minutes ago" looming along with the disappointment.
I wandered along the seaward path past the white sign and on to the wooden bridge (where all the reports on Bird guides say it is) and back several times then finally found it back near the sign. It was on the small bit of shingle between the path and the water but it flew off onto the seaward shingle banks almost as soon as I'd spotted it and certainly before I'd got the camera onto it.
Still, I now knew where it was so it was a matter of waiting and hoping. I didn't have to wait too long before it returned and I was as happy as Larry clicking away to my hearts content.
It did return to the shingle banks a couple of times as people/dogs wandered past but always returned pretty quickly. The last time it was in camera range I was clicking away some 6-8 yards from it when 2 dog walkers (plus dogs) walked past and it totally ignored them!!! They couldn't have been more than 3 yards away from it.
This was by far the closest I have got to a Lapland bunting and the only time I have seen one when the sun was shining. All my previous shots have been binned!!!! 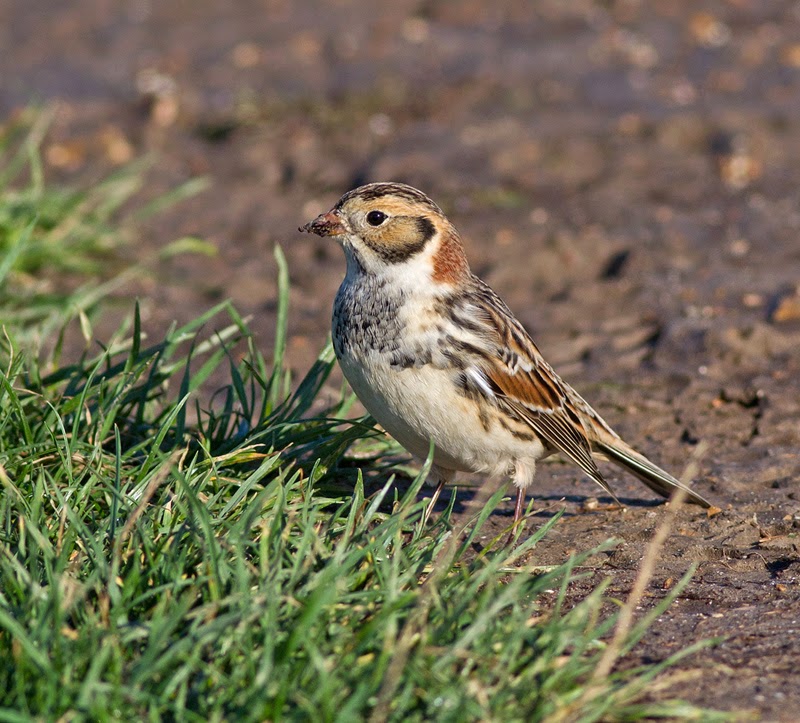 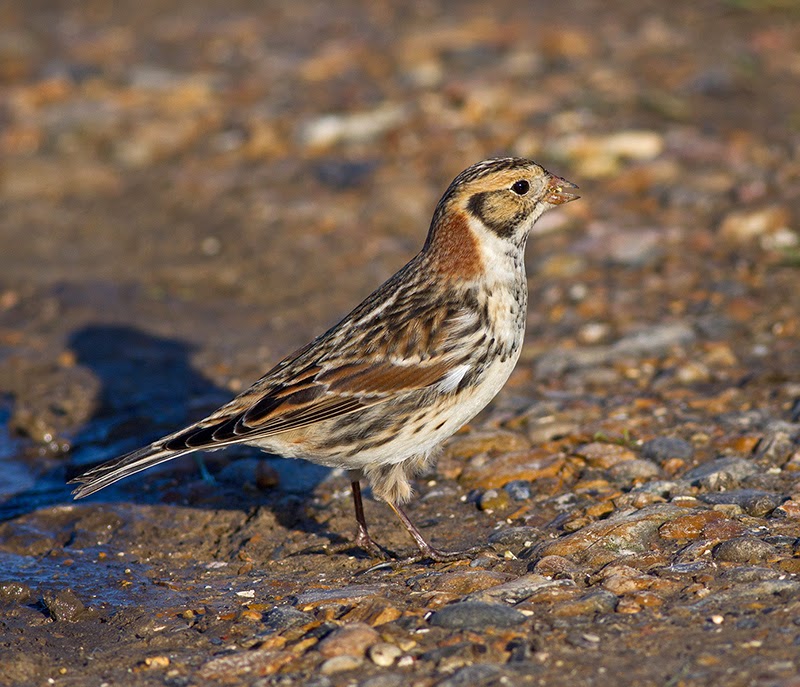 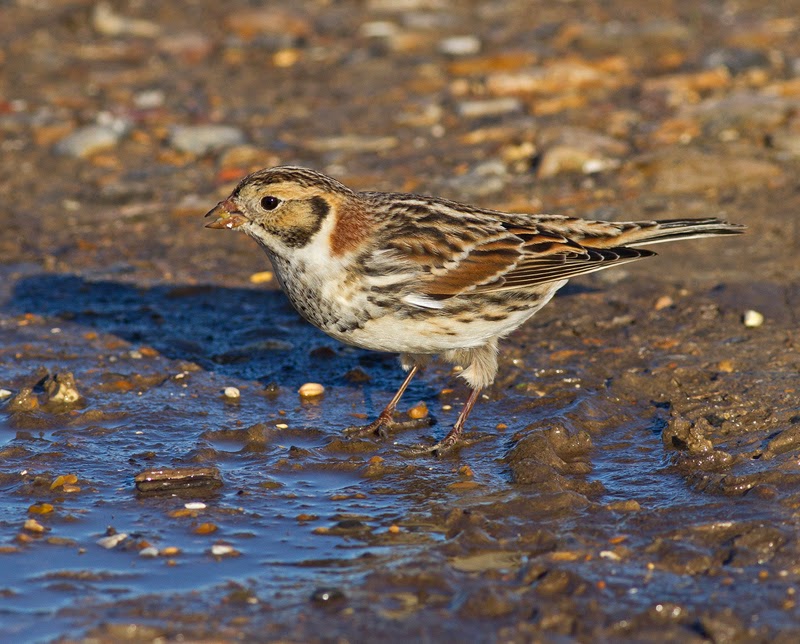 The chap I saw first up had also told me of some black redstarts in the church yard so after taking some 300 shots of the bunting I went over there. As I approached I could hear a black redstart calling and on the fence - 20-30 yards away - was a cracking male. Only downside I was facing into the sun.
Anyway I moved into the churchyard and sneaked up on him - still on the fence.

He actually spent a lot of time in the trees, sometimes very close, but getting past the foliage without spooking him was a struggle as was shooting into the sky. 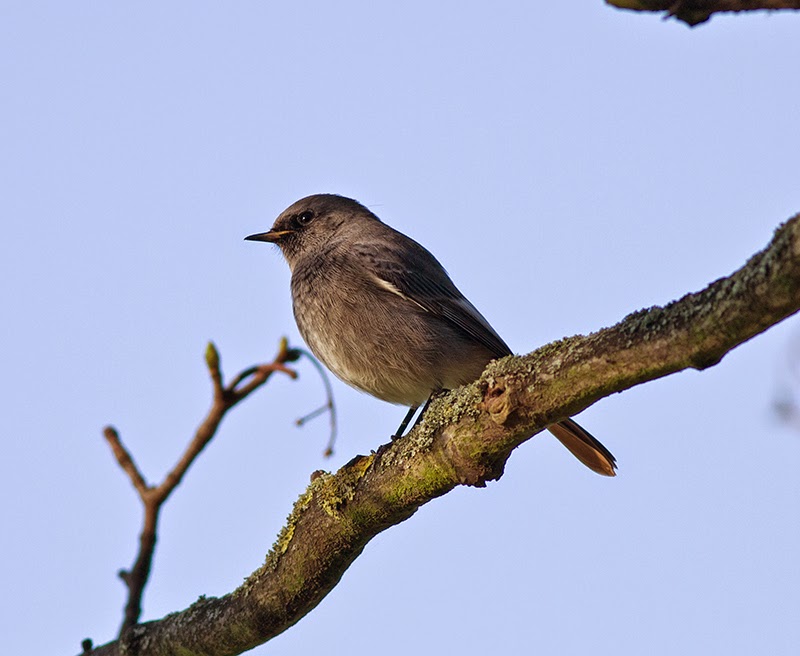 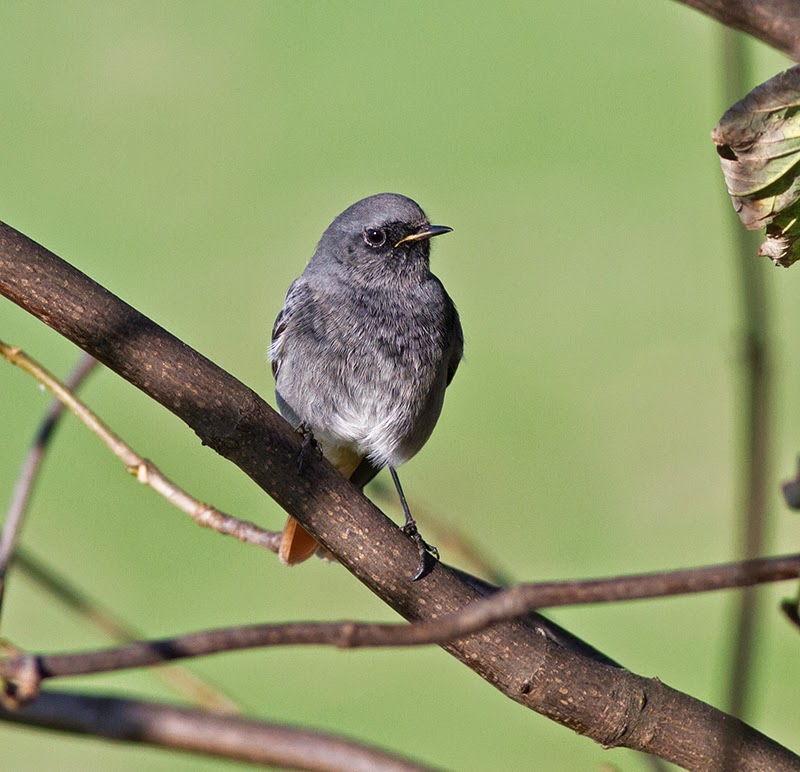 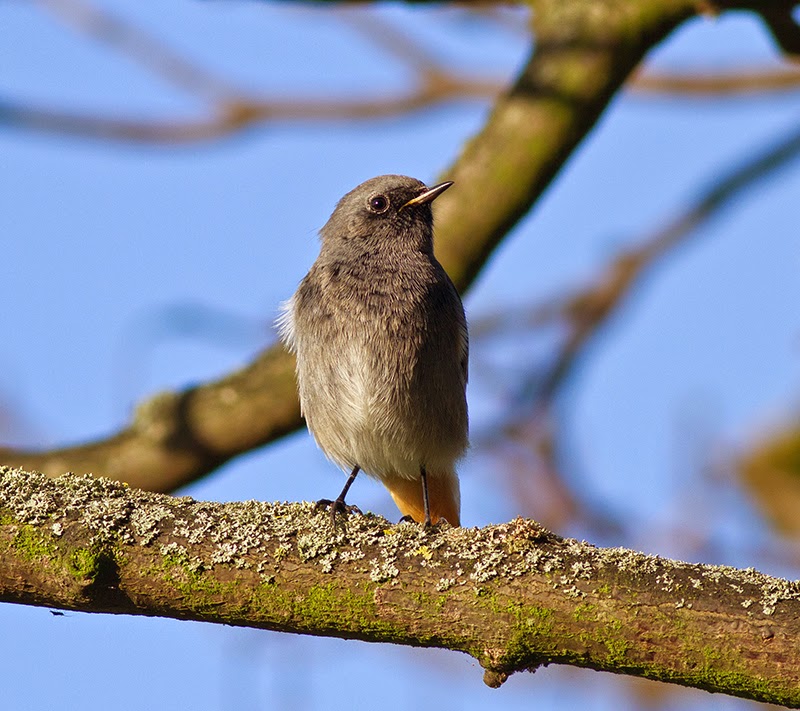 I did take a few pictures of the female but most of the time was spent on the male.
By now it was 3.00 pm I'd been in the field 2.5 hrs and after a morning at the hospital I was well and truly cream crackered.