Yesterday we (Steve Ashton, Alan Ashdown, Martyn Wilson, Tim Gutsall and yours truly) enjoyed another trip to France organised by Ashtontours the company famous (in equal parts) for it's photography and character assassination. It's because of the latter I'm trying to get my post out before that of Mr Ashton and it's inevitable slandering of my good name!

Our trips to France are normally not that ambitious and just involve going to Marquenterre however on the last trip we also took in the salt marsh of the Baie de Somme and enjoyed superb views of several Savi's warblers (Steve had been told where to go.......to find the birds that is) and fleeting views of a grasshopper warbler.

Anyway I (and Martyn for that matter) had been told of a new reserve in the Baie de Somme that held a large number of black necked grebes at Grand-Laviers - just east of Abbeville - so that became our main destination.

It was around 9.00 am when we arrived  at Grand-Lavier (a few delays on the tunnel) and typical of a lot of French reserves it didn't open till 10.00 however whilst having a quick drive around the area we had seen avocet and black winged stilt in flight and a black redstart so the omens looked good. To while away the time until the reserve opened we popped along to the Baie de Somme to look for the Savi's. This time we were unlucky though in quick succession we saw cattle egret, little egret, great white egret and grey heron and a hepatic cuckoo.

Back at Grand-Lavier we parked up and watched a pair of little ringed plovers chasing each other around then went to the visitor centre and saw a board listing what was present .........48 black necked grebes!!!!! It looked like our luck would be in - after all we only needed one to come close.
The reserve itself consists of several lakes hidden from the footpath that runs around it by a high bund with viewing only possible from the screens/hides. From the very first screen we could see the reserve was not going to be what we'd hoped. The screens were a long way back from the waters edge, there was very high grass/vegetation growing in front of the hides obscuring the views (especially those vertically challenged) so the birds on view were both obscured and miles away. This was the pattern for every hide/screen.

What was on view were loads of black necked grebes and black-winged stilts, lots of avocets and around 15 black-tailed godwits but as I said everything was very distant.

We walked the whole circuit (no choice really) but by the end everyone was pretty down - it was now noon and we hadn't taken a meaningful picture between us and according to Mr Ashton it was all my fault.

Anyway, we decided to go to Marquenterre and once there things looked even gloomier - there was only one stilt in view on the main pool.  Martyn suggested we go for the blue throat (I hadn't been there when they found it previously) and see if any black-necked grebes were on show.

As we arrived at the blue throat spot our mood immediately lifted as the blue throat flew onto a fence just in front of us then sat up on a reed stem, food in it's beak and fluttering it's wings as if displaying. After a minute or so it disappeared into some scrub only to reappear a few minutes later when it sat up and preened. 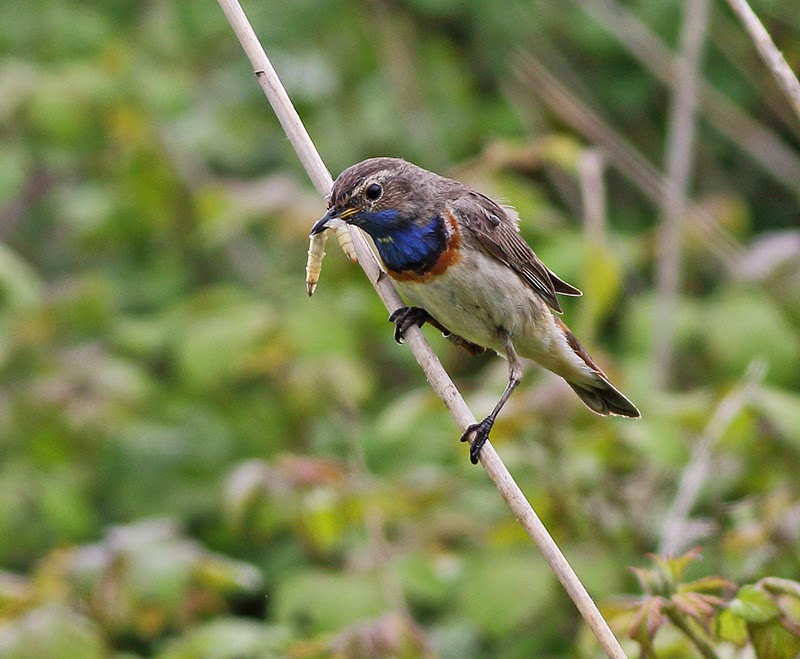 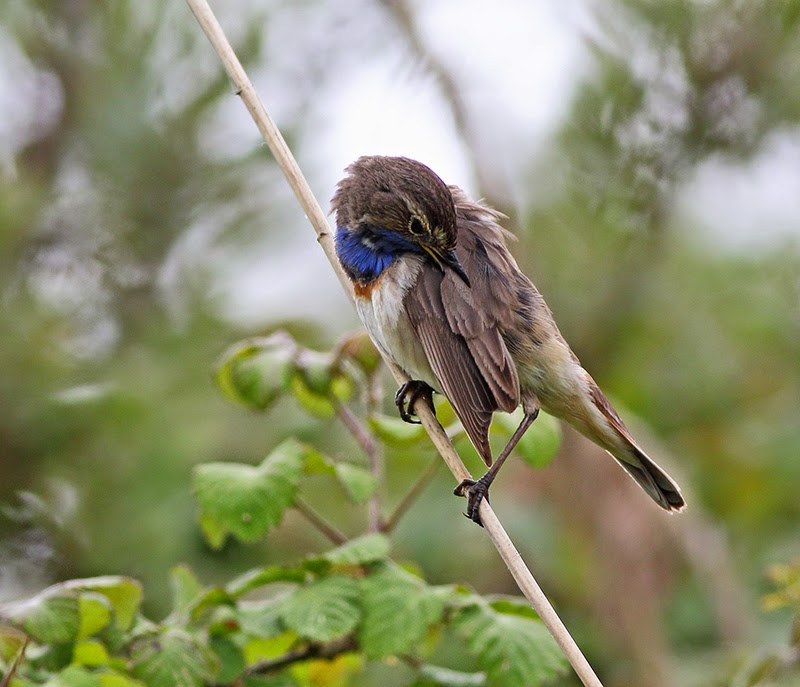 The next hour (perhaps more) was spent around the same area with the blue throat coming back at regular intervals, sometimes dropping straight into the scrub but sometimes just sitting there waiting for it's photo to be taken. 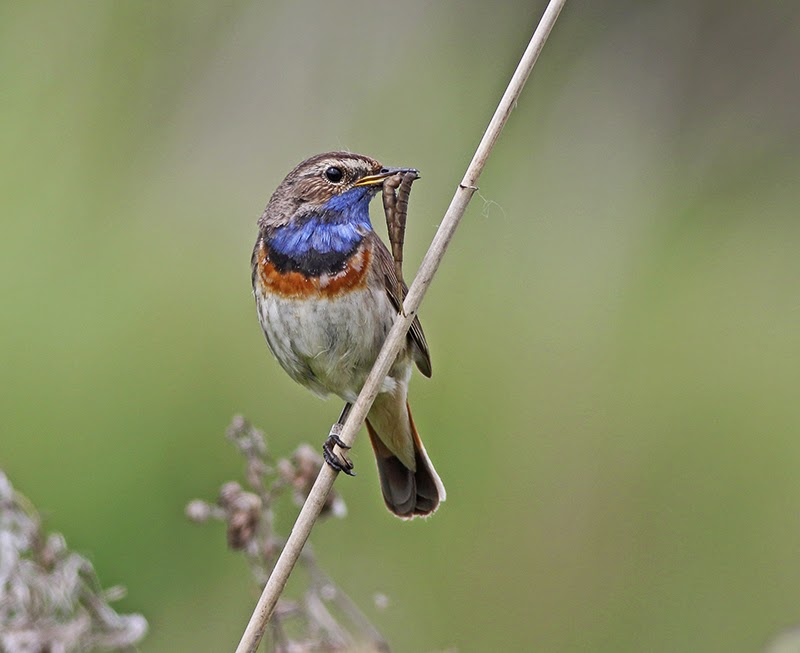 The amazing thing about this whole episode was the number of people walking around the reserve who took absolutely no notice of the bird. We would be looking down our lenses clicking away (we were on the footpath) and they would walk straight past us totally indifferent to what was on show and in doing so scaring it off.

Eventually we'd had our fill so went off to look at the black-necked grebes which whilst being a heap closer than at Grand-Lavier were still not in a good position to photograph because of the light direction. 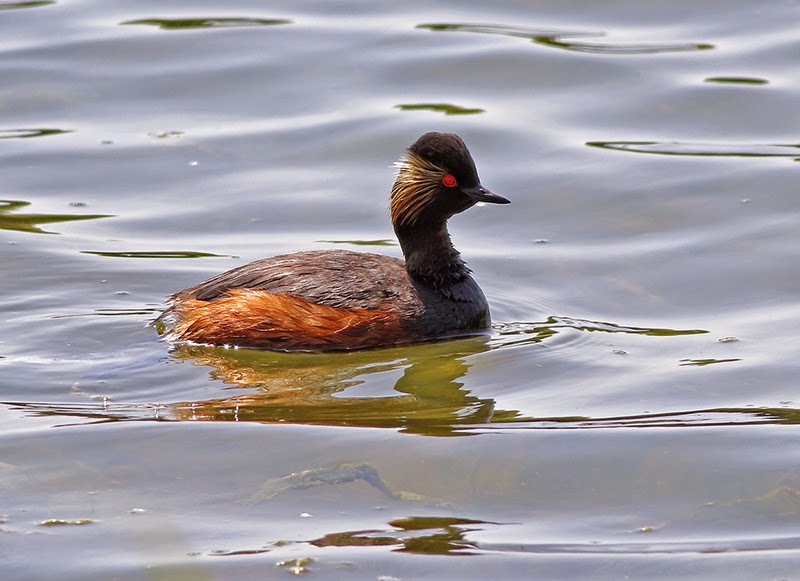 After that it was back towards the main pool to spent the rest of the afternoon photographing whatever came close - which wasn't that much to be honest. 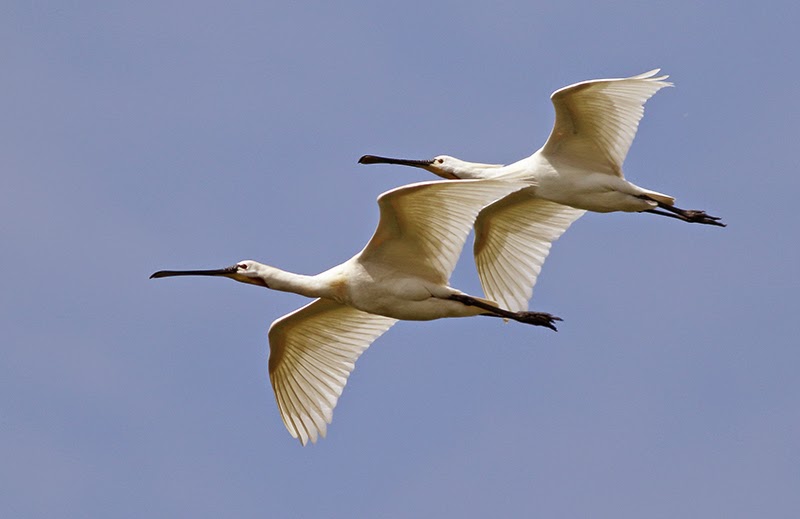 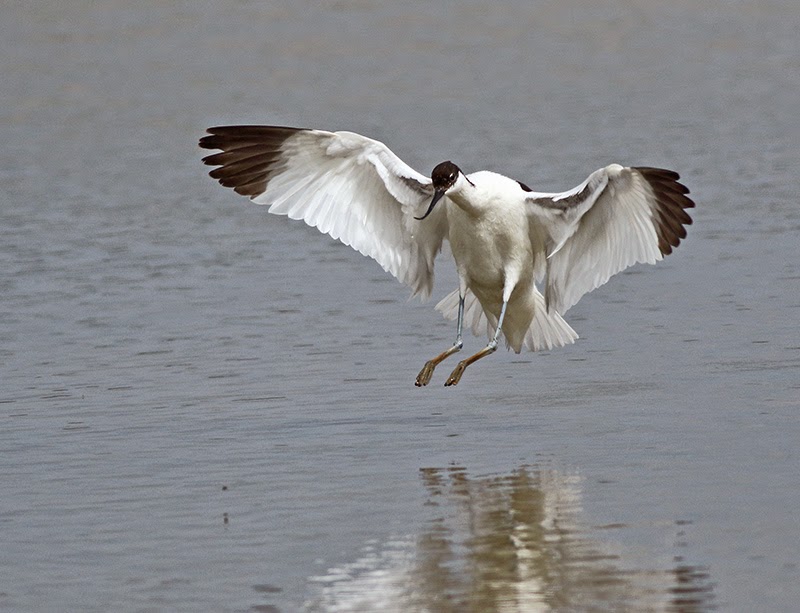 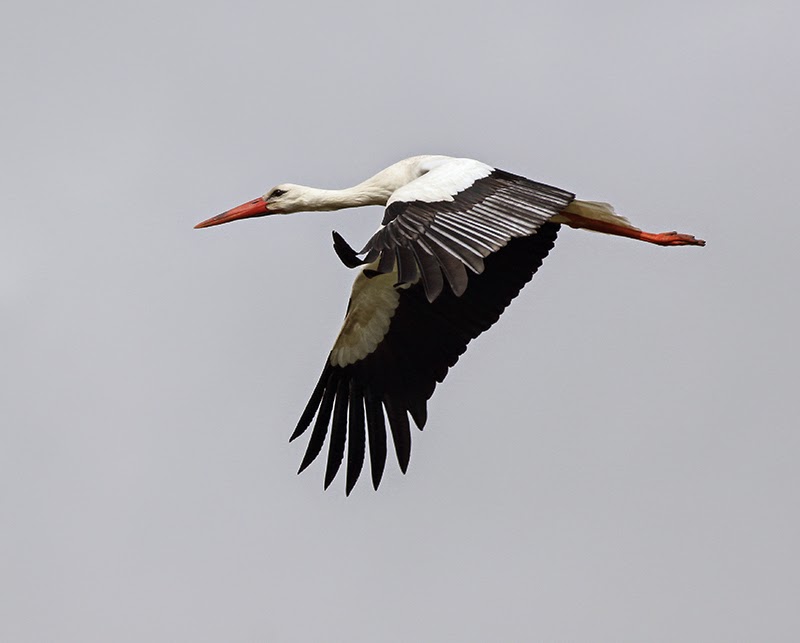 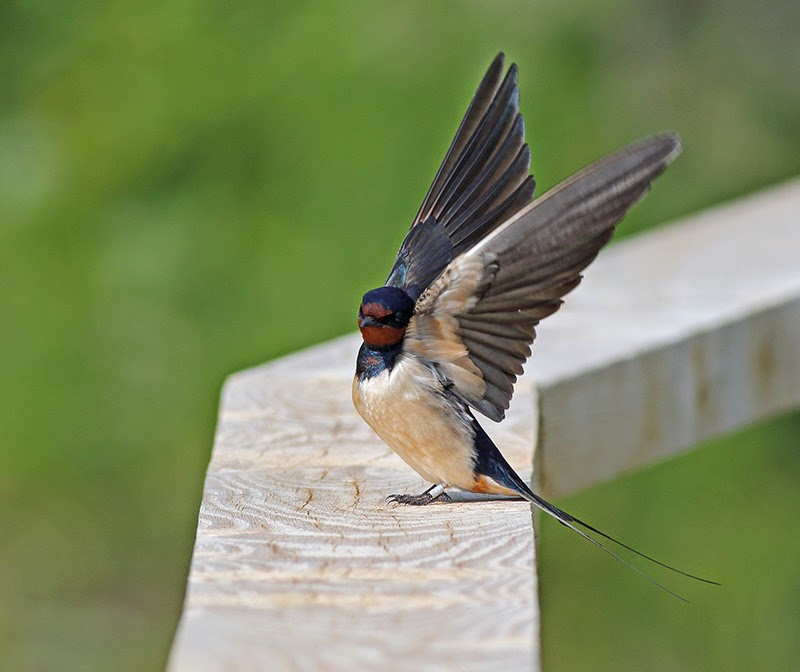 One interesting sight was the number of very young spoonbills flying around with tiny beaks:

Eventually we gave up and departed somewhat earlier than anticipated but as far as I'm concerned it had been a great day. I have seen blue throat on a few other occasions but the views had at best been fleeting and I hadn't taken a meaningful picture of one so this had been a red letter day.


As for Grand-Lavier if it's photographs you are after forget it. If however you are only interested in seeing the birds it looks very good though you need to be 6 feet tall to see over the grass etc growing in front of the screens. Since it costs 6 Euros to get in you would think they could keep the grass cut.

Posted by Greater Kent Birder at 16:47