The emergence of some excellent pictures of the Dutch siberian rubythroat was too much of a temptation for  Mr Ashton and he texted around for anyone interested in a long distance twitch. Almost immediately the car was full with Alan, Martyn and myself signing up.The initial plan was to make it a day trip but heavy wind a rain caused the trip to be cancelled so we waited for a window in the weather to have another go hoping against hope that the thing stuck around.
Well on Tuesday morning (February 2nd and a week later than the initial date) we went but by this time the trip had expanded to a 2 day affair with an over night stay and we had unfortunately lost Martyn.. We also departed at 1.30 am so as to get there for first light. If it was there we were determined to get some reasonable images if at all possible.
I'd been in Dorchester on the Monday for a funeral so didn't arrive home until 9,00 pm and was out of the house at midnight to meet up with Steve and Alan.
We arrived at Hoogwoud uneventfully around dawn and went to the area in which the bird had taken up residence. Despite only being half light there were already 2 Dutch guys there and they confirmed the rubythroat was still around. We scurried off to get our kit and sat down just behind a prone Dutchman to await its appearance. We were around 10 yards from the log (the Dutchman was even closer)  though as he was the one meal worming the area who were we to complain.
It wasn't long until out the rubythroat popped into view and despite the appalling light we clicked away happily. Job half done. The images were total rubbish - what else do you expect at 1/50th sec at ISO 3000 or so but what the heck we'd seen the bird, got some record shots and we'd only been there 15 minutes.


The Dutch guys continued to bait the area with meal worms and the bird appeared at regular intervals though was rarely in sight for more than a few seconds after which it would fly off and you had to wait for 15-30 minutes for it to come out again. In these periods it either disappeared altogether into the adjacent gardens or could be seen deep in the shrubs mostly standing around but sometimes having the odd peck here and there.


The Dutch guys were initially baiting a silver birch log but then exchanged it for a moss covered one that they had brought along and eventually took the logs away completely and baited the edge of the shrub bed and path itself. 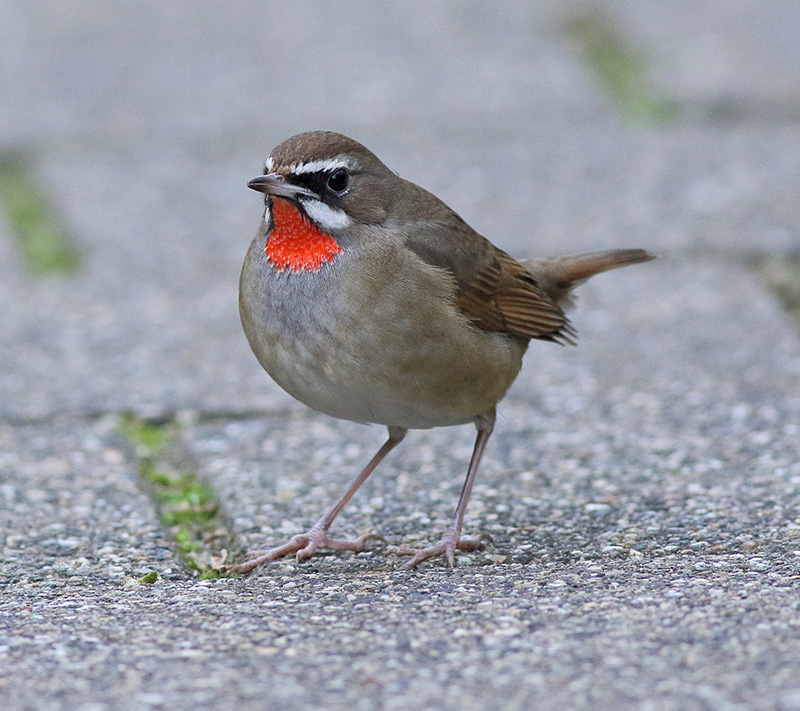 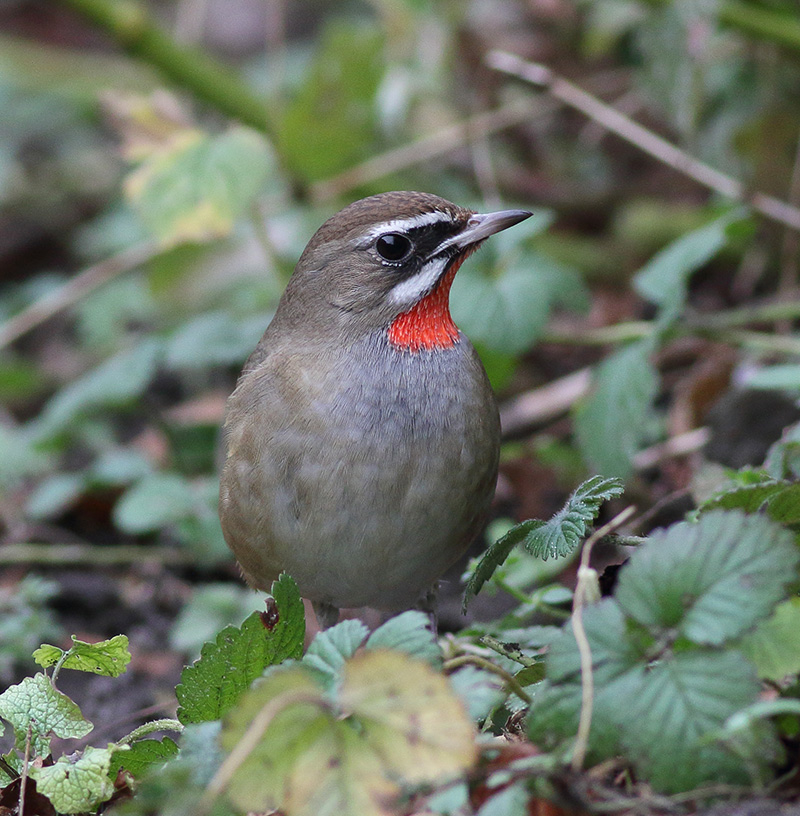 The light never got that good with 1/160 at ISO 1000 being typical however when the bird was out in the open and not actually moving it did stand totally still so crisp shots could be obtained with shutter speeds as low as 1/80th.

There were a few other disturbances to proceedings. The odd pedestrian came along the alley as did the odd cat but the main problem were the blackbirds. They ate the meal worms and chased the rubythroat away. As a consequence whenever they came around one of the Dutch guys chased them off. The pictures I've posted encompass the shooting conditions and the props put out by the Dutch guy.

As the morning wore on the Dutch guy edged closer and closer and I'm sure this impacted the frequency of the birds visit to the bait. I don't know why he had to get closer because he was in front of me and I was only 7-10 yards from the logs and he had a long lens. Finally he set up a camera only a foot from the log and was going to shoot by remote but we didn't hang around to see if he was successful. I must have taken 350 shots by this time and quite a few looked very good on the back of the camera.

We went off to Den Oever as lesser scaup and bufflehead had been reported in the area.
First port of call was at the first bit of water you see on leaving the motorway and turning east where we saw the common ducks including a few goldeneye. Then we moved on to the south west corner of what is a very large harbour  - the corner where a canal enters the harbour via a lock..

We parked up and immediately spotted 2 drake smew swimming rapidly away from us, then a duck goosander appeared and around the back of a pump house I found an Egyptial goose. 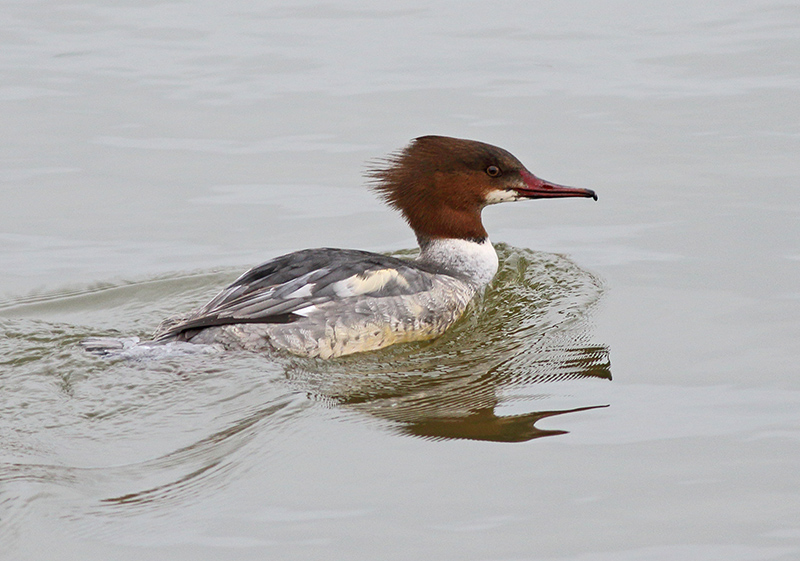 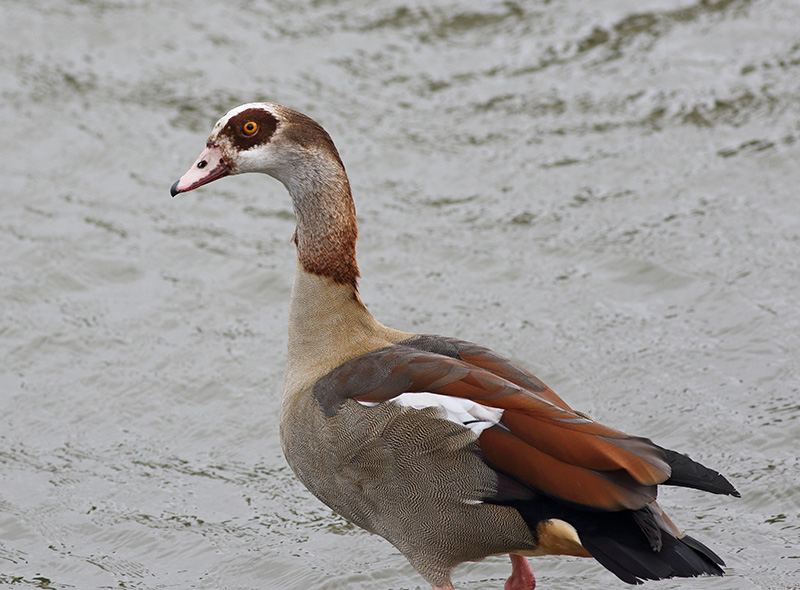 We then started scanning the water - lots of tufties and pochard plus around 15-20 smew (equally red heads and drakes) around 6-8 goosanders. We (well I know I did) scanned the edge of the reed bed looking for the bufflehead but couldn't find it. It seems it spends a lot of time in the reeds. It was reported later that day so we dipped. 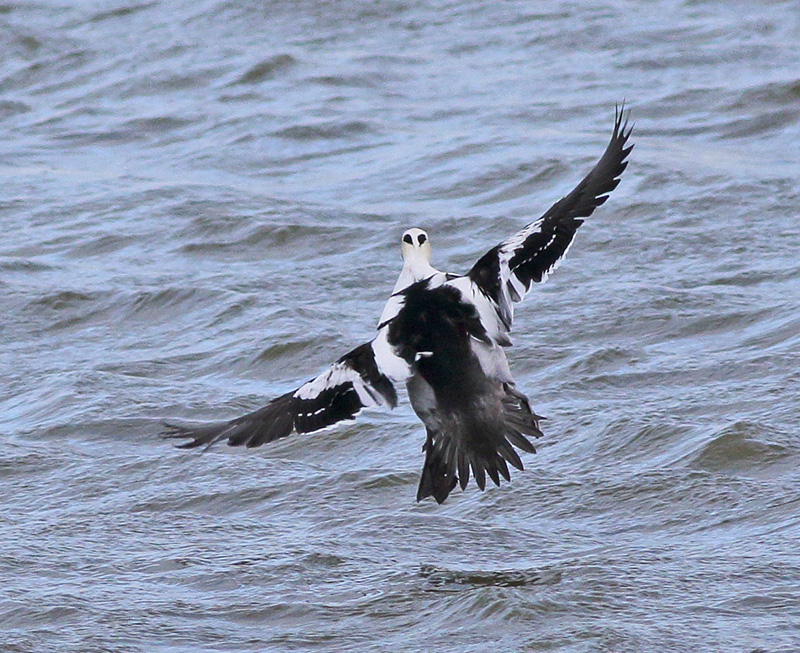 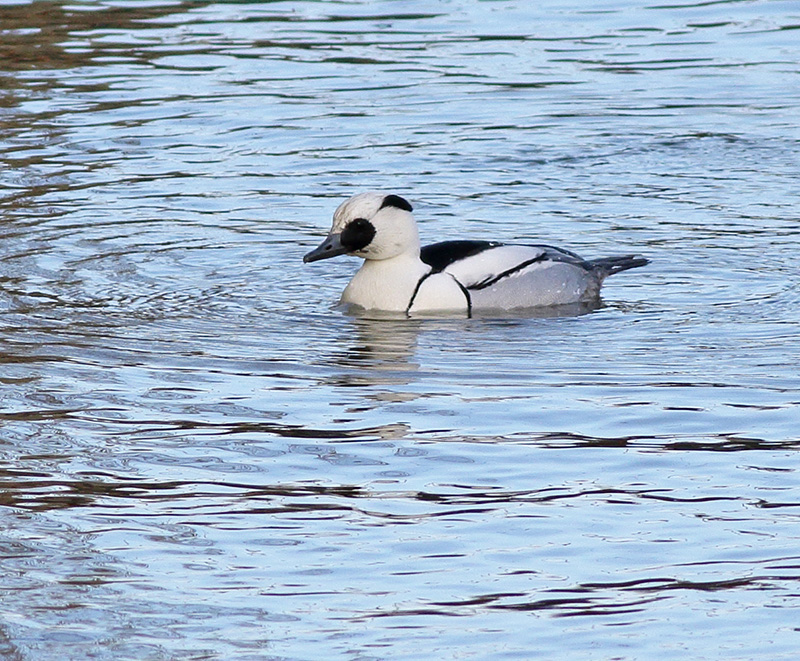 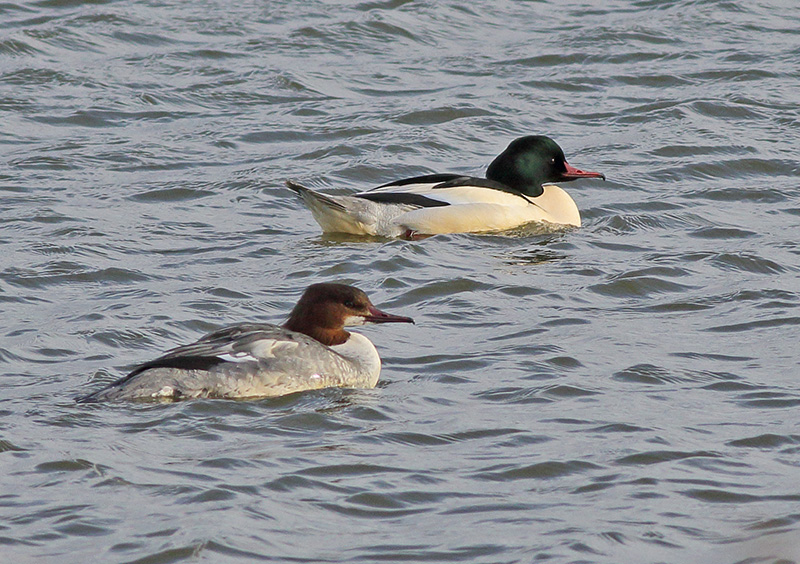 We also went a half a mile down the coast to look for the lesser scaup on the pools at Noordelijk Wiel but that hadn't been seen that day - all we saw there were hoards of tufties and pochard.
On the misidentification front I thought I'd found a scaup (female) but it was only a white faced tufty. Steve thought he had a Slav grebe but it turned out to be a great crested ( I think he was tired!) then he claimed a barnacle goose that I teased was a Canada goose for the rest of the trip.

We did see lots of geese but most were seen in the fields as we went along the motorways but the only ones that we got a definite id on were grey lags.

Late afternoon the cloud began to break up so we went back to the rubythroat hoping the light would have improved but it hadn't. The sun may have been shining but the alley was in deep shadow. We didn't stay very long but I did take a few more shots of which this is the best:

Steve had booked us into a very swish hotel - so we retired there to clean up, do a little chimping, have a couple of beers and something to eat. By 8,30 pm I was all in so retired to bed - I'd been on the go over 36 hrs without any sleep and had driven or been driven over 600 miles but it had been worth it.

Wednesday dawned a little colder, a little less windy and a lot brighter so we went to have another go at the rubythroat. There was only one person there when we arrived and he was standing so we sat in our previous position very hopeful. Things didn't work out as hoped though.
We had several problems. The sun coming out seemed to have changed the behaviour of the bird quite considerably. For a start it spent a lot of its time close to us perched up either singing or preening but obscured from view. It also had a fly around at one point flying straight over us into a tree 20 yards away where a cat tried to get to it though one guy was about to shoo the cat away when the rubythroat flew back to it's normal haunts..
Baiting the log was also a problem. Whilst I had managed to get some meal worms I'd only be able to get large ones (~ 1,25 inches long) as a consequence whilst it would come to the logs to feed it would grab one of the worms and immediately fly off into the scrub to wrestle it into submission and eat it.

We did get a few images but most of these were a little disappointing. In sunlight it looked a very plain brown bird but with attractive face and throat markings. Under dull conditions the chest looks quite grey and the primaries are a darker richer brown than the rest of the body. The red of the throat was almost luminescent and radiated under any lighting conditions. 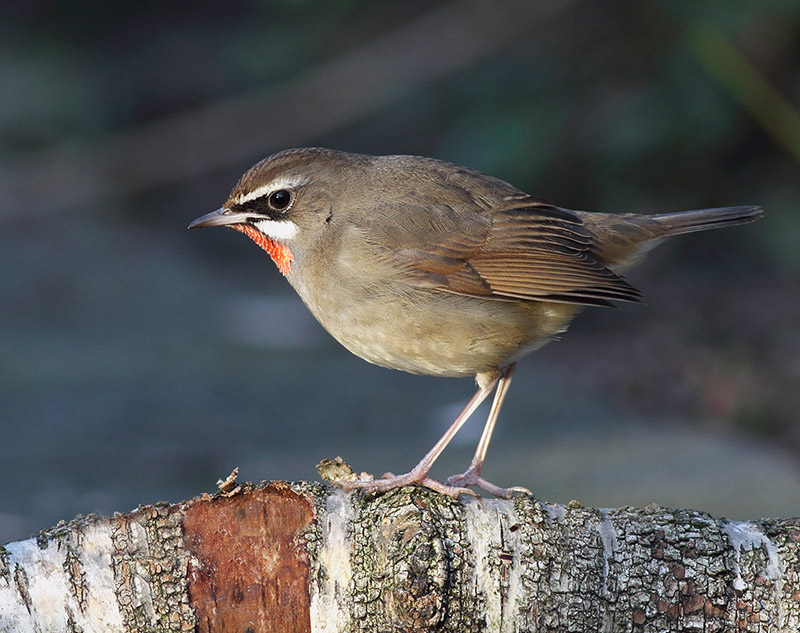 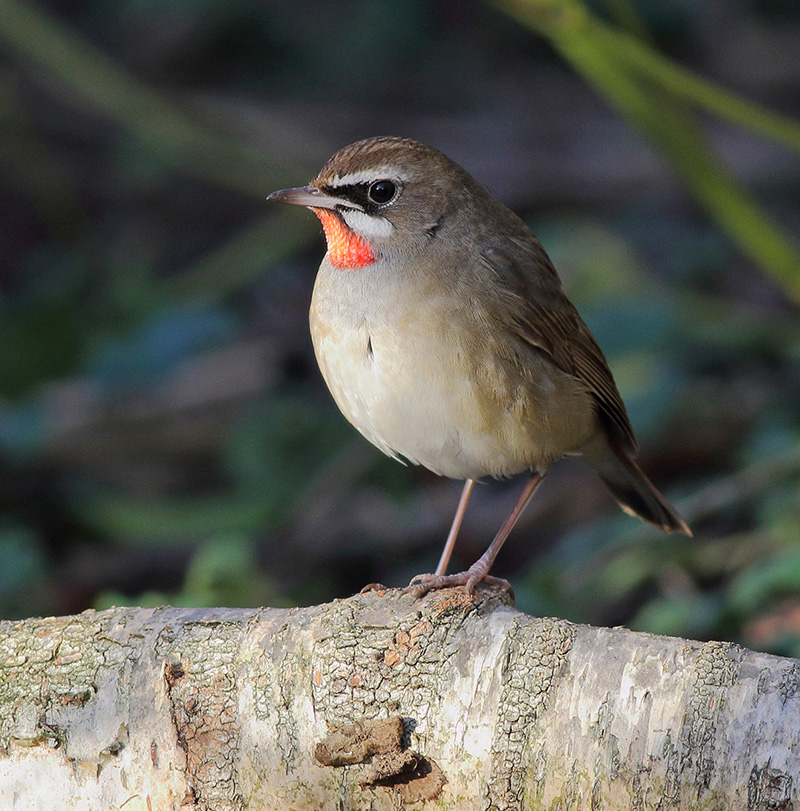 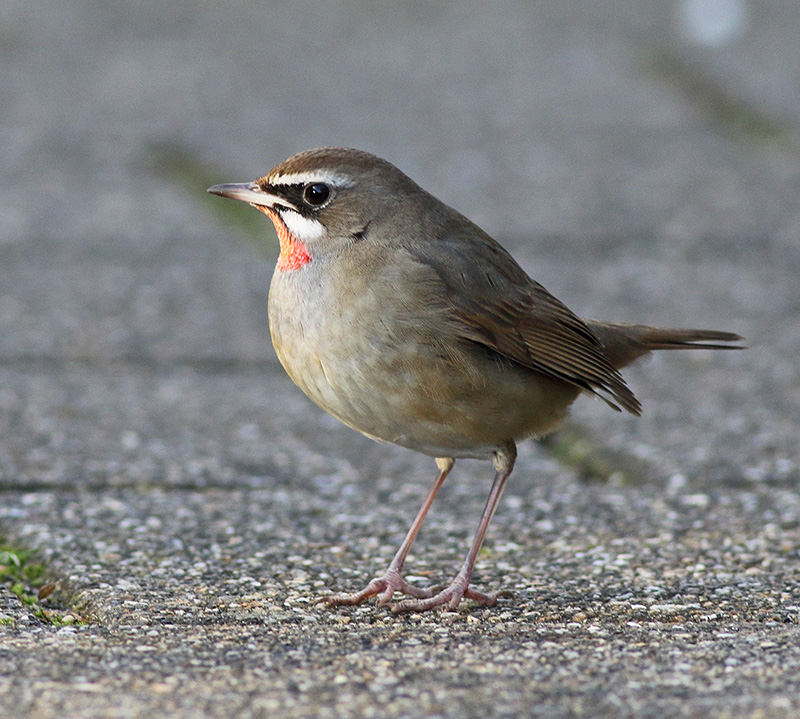 Things weren't all negative though as on 2 occasion it came through the shrubs straight towards us and sat almost in the open only 5 yards away though it wasn't completely in the clear. 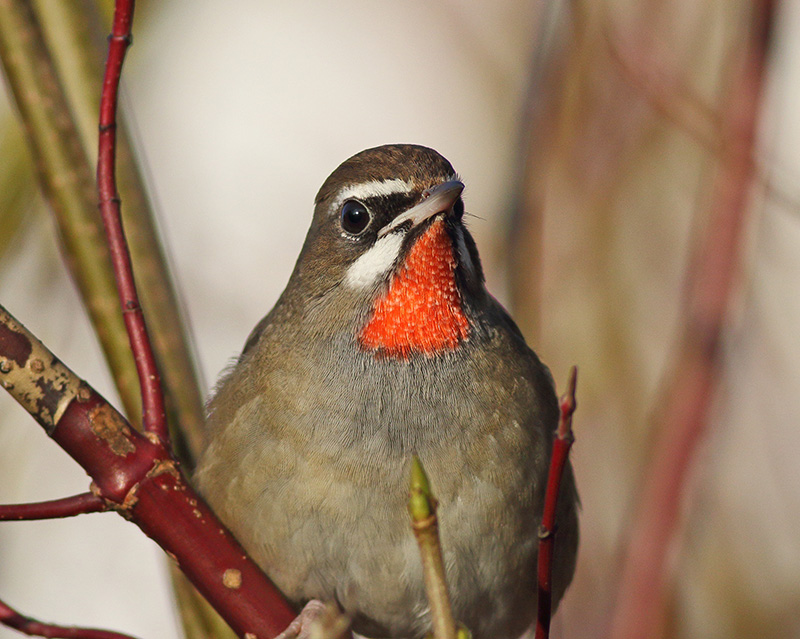 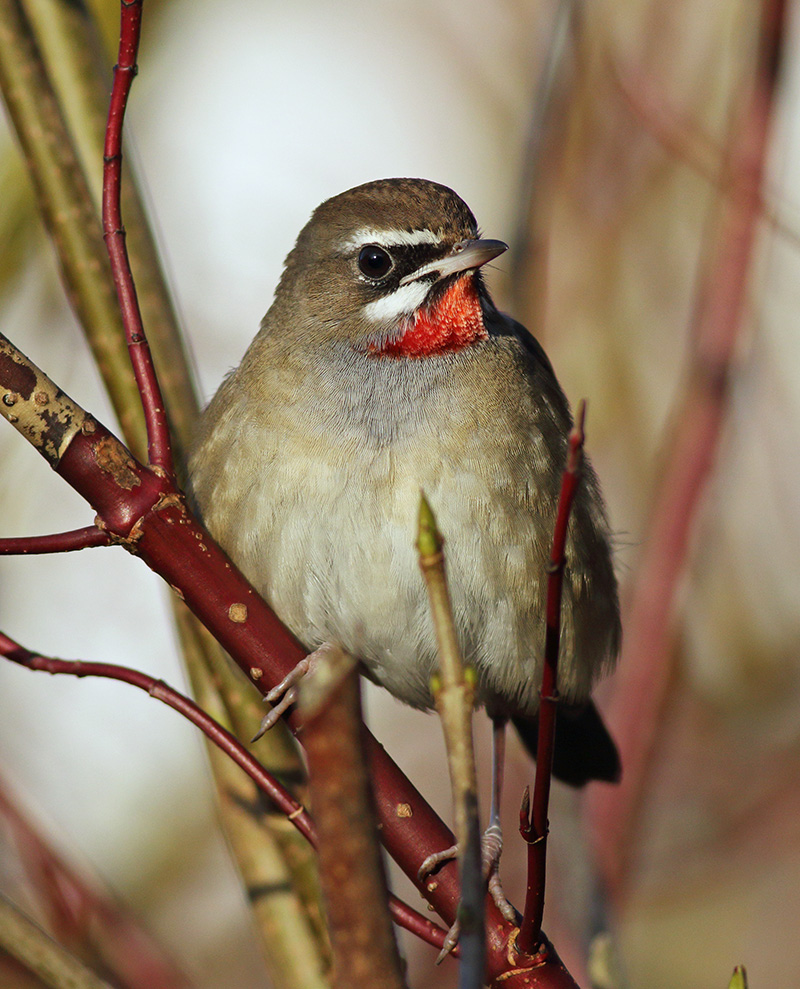 Eventually we gave up and started the journey home. Of the rarities reported in the Noord Holland area we'd only seen the rubythroat but that was, after all, why we were there and we'd got some great shots. I was happy though very tired.
Thanks as always to Steve for organising the trip, driving and booking us into by far the swishest hotel we've stayed in on our various jollies and at only £42 per night.

Posted by Greater Kent Birder at 13:24