This part of the report concentrates on the Reserve Naturelle de Cherine.
There are several lakes with hides in the reserve but only Etang Cistude and Etang Sous offered much for the photographer.  Martyn and Alan also walked down the track to Etang des Essarts but didn't see very much other than a black headed gull colony being attacked by a black kite. In fact we were all walking that track when we spotted  a pair of red-backed shrikes. Steve and myself hung around hoping for some better shots whilst the others walked down to Essarts. It was a good call on our part because whilst we were watching the male shrike on a fence a wryneck landed 3 or 4 feet from it. All thoughts of the shrikes disappeared as we concentrated on the wryneck. It hung around for 10 minutes or so and allowed a few record shots to go with those of the shrikes. By the time Alan and Martyn got back both the shrikes and wryneck had disappeared. 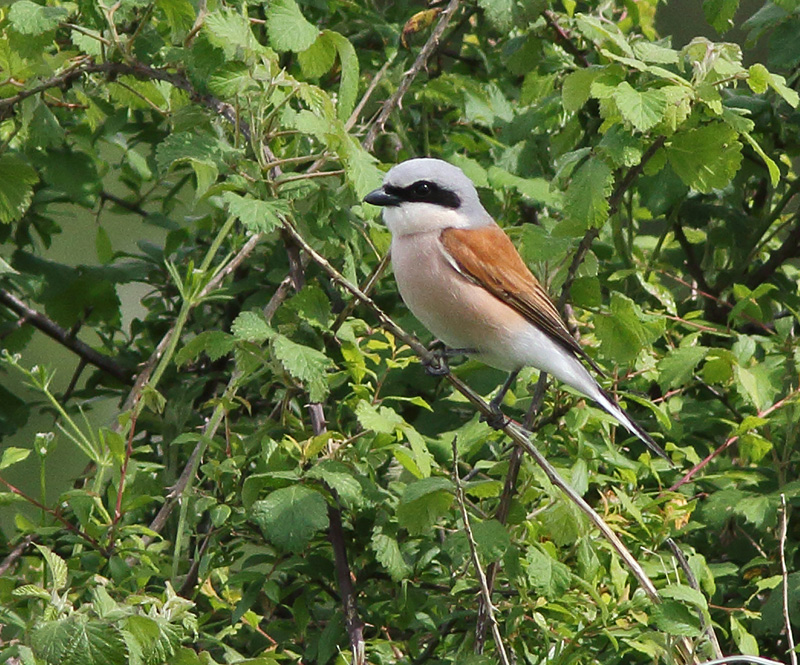 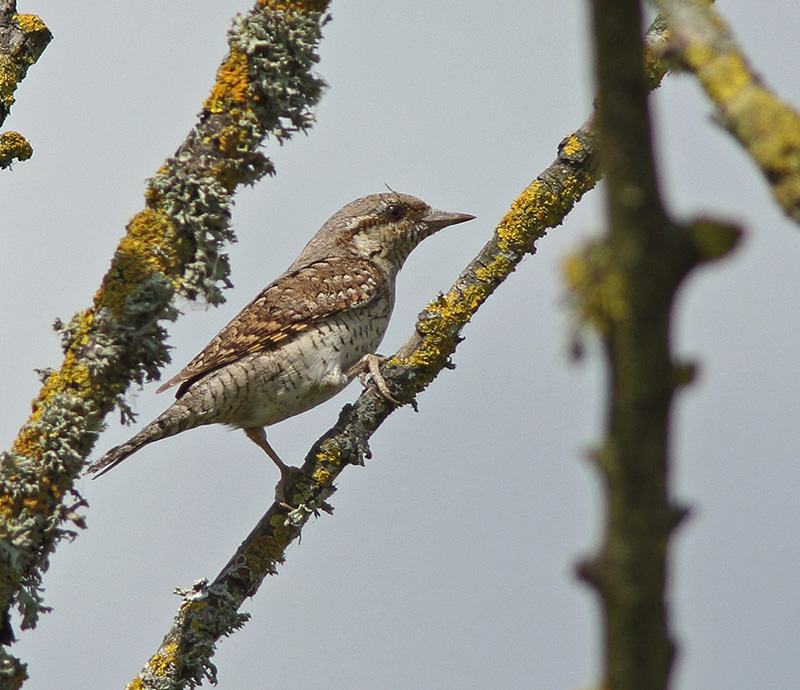 Etang Cistude is right by the visitor centre but the hides have some weird opening times - in fact we only got into them once - they were locked every other time we tried. Out in front of the hide were black headed gulls but there is a small heronry close by and purple herons were pretty easy to see  - if distant. We did find one hiding in a clump of reed 30 -40 yards from the hide and eventually it came out into the open, caught a fish and immediately flew off into a distant reed bed.

Over the back from the main hide we could see a pair of black necked grebes so when we were kicked out of the main hide at 12.30 (it closes for lunch or something like that!) we wandered round the lake to the other hide (which didn't seem to close for lunch). Once there we watched purple herons flying near to where we had just come from and the black necked grebes disappeared off over there as well - surely they didn't know it had closed?

Most afternoons saw us ending up at Etang Sous (the sun is in your face in the mornings). This hide was great for egrets when we were here in the autumn but this year none came close. This may have been because the water was very high or because several black headed gulls nest in front of the hide and chase away the herons if they come in; who knows. All I know is none came in.There were a number of purple herons in the reed beds but all you ever saw of them was them popping up above the reed and almost instantly dropping back into them. 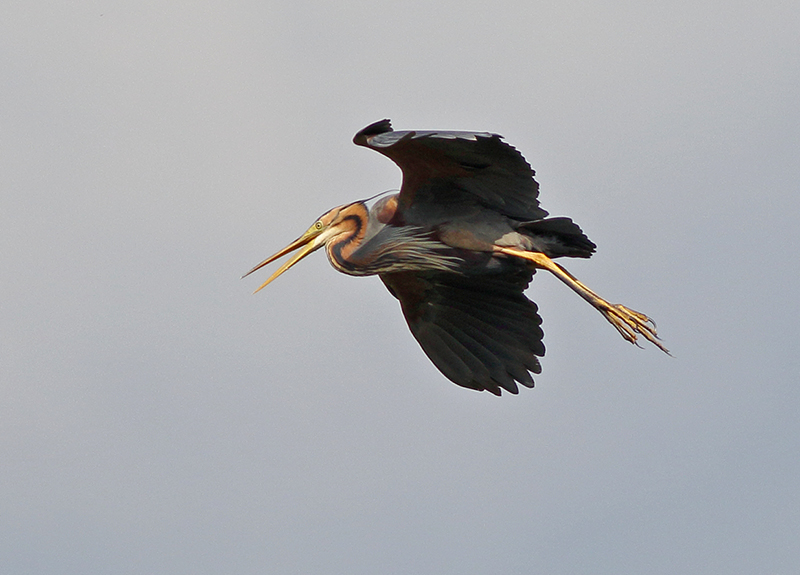 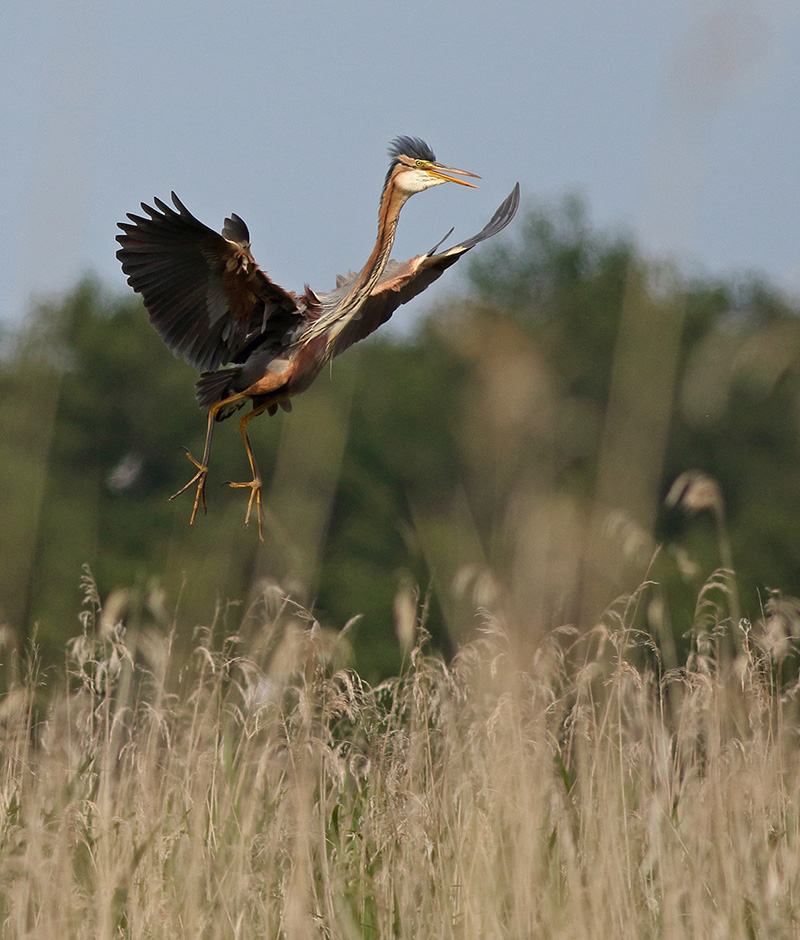 There was also a great reed warbler but whilst it shouted and hollered all day long I only ever managed a distant glimpse of it.
The main attraction of this hide are the whiskered terns. There were around 200 (yes I did a count) so they were constantly flying past picking up reeds for nests and there were several perches close to the hide for them to land on. 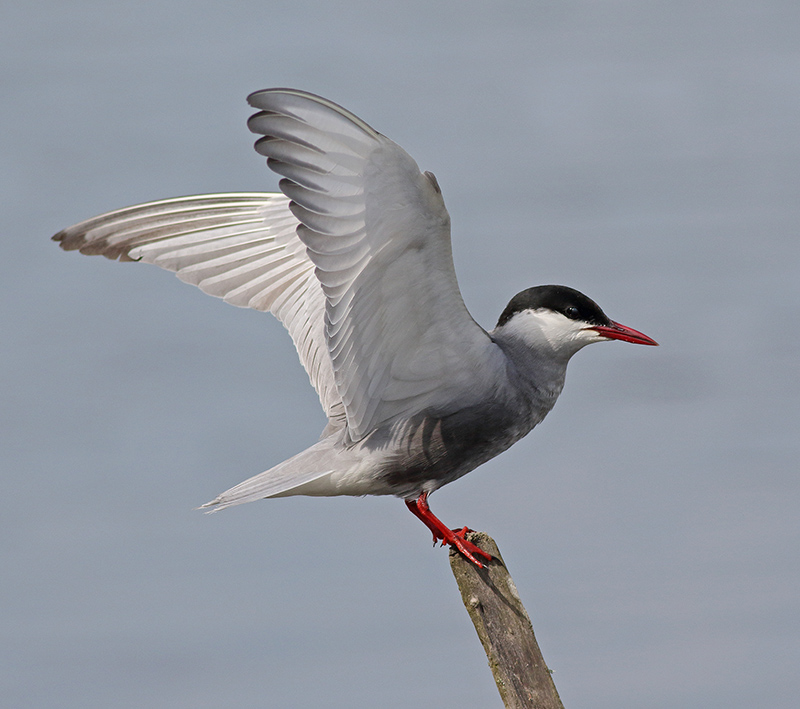 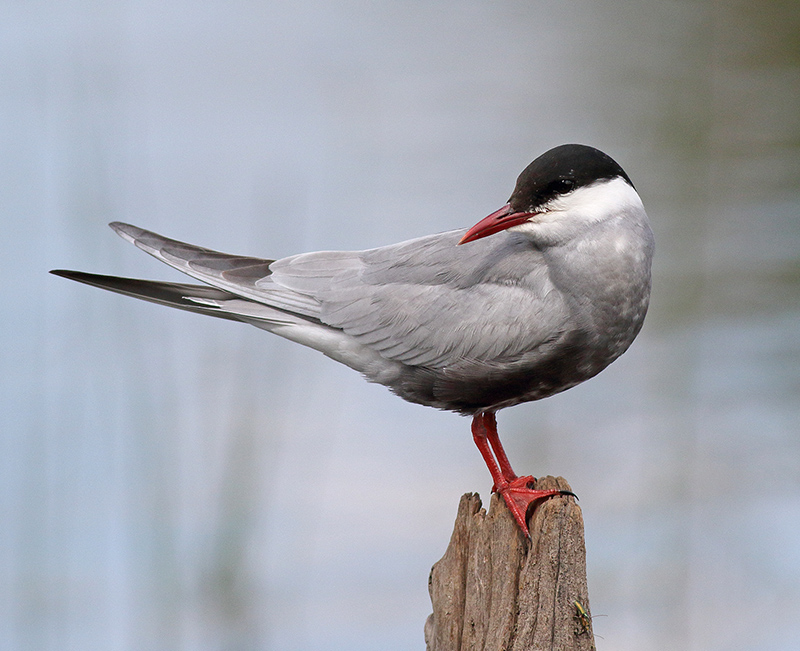 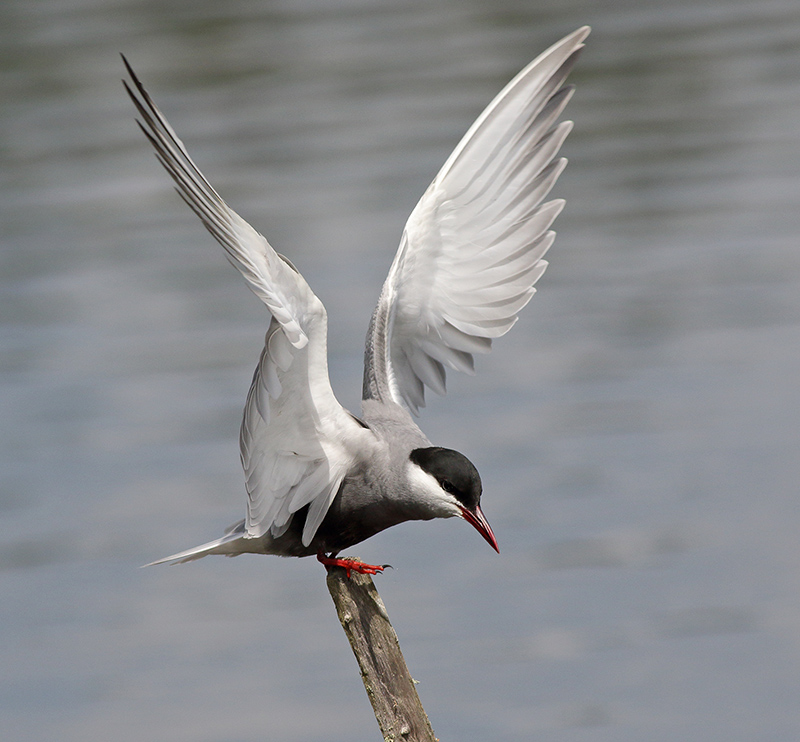 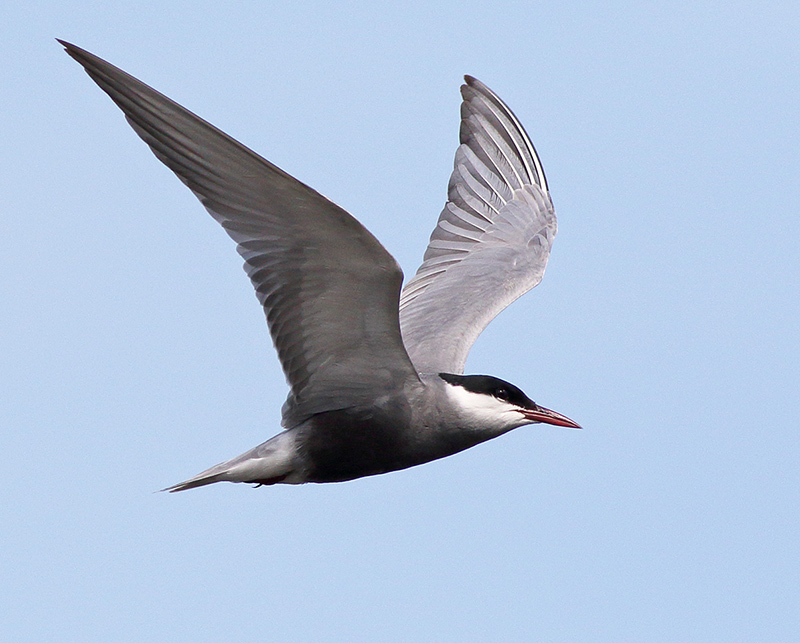 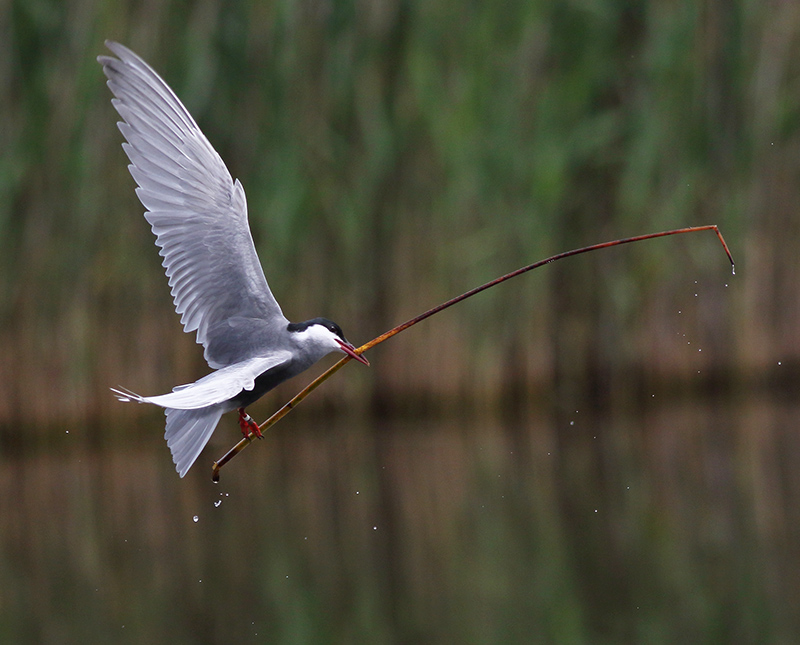 The other attraction of this hide and the reason for several people to sit there all day every day is the possibility of seeing a little bittern. On our first visit we could hear one calling and on our second Alan got  a glimpse of one in the reeds.  On our last visit Al and Martyn went off for a walk but Steve and myself hung around and were rewarded with one flying into the reed bed next to the hide where it showed for a few seconds before disappearing into the reeds.


Fortunately it (or perhaps it's mate) did show again as it flew back out to the main reed bed and this time Al and Martyn were around.

The visitor centre is also a good place to photograph European green lizards (lacerta biliniata) every time we went there some were backing in the sun.

A few comments about the general area.
Nightingales are everywhere, Thousands of them and possibly the most common bird outside the villages but just as in England they remain near impossible to find in the open.. My best and only effort:


Black kites are also everywhere. If you are driving around you'll probably see one every few minutes they are that common.


Also seen, again as we were driving, were short-toed eagles. I think we saw at least one every day - though always distant.
A couple of booted eagles were also seen during our travels but again only distantly.
Buzzards were also fairly common (though I would say not as common as the black kites) with this pale morph being the most interesting.

Black redstarts were not as common as I expected though that may be because we didn't spend that much time in villages. There were 2 or 3 singing males by our hotel and we saw them in several other villages. We also had the bonus of a pair of spotted flycatchers making a nest 20 yards from our hotel.

One final thing to remember if you are considering a trip to la Brenne is  most of the restaurants are closed Tuesdays and Wednesdays - including the hotel restaurants - I can't think of anything more stupid in a tourist destination. One night we resorted to sandwiches and beer from a supermarket and sat outside our hotel to eat/drink. Seeing us there several punters stopped thinking the restaurant was open only to go away disappointed.


That not withstanding the birding was very good - how could it be otherwise with little bustard, little bittern, bee-eater and short-toed eagle being seen? The photography was a lot harder than expected but most importantly it was warm and dry!!!!!