Tenerife - A chance for some warm Bird Watching in December

Whilst Tenerife may not be high on most peoples birding destinations an invite for my wife and I to stay with friends for a  week in the sun with a bit of birding and a lot of eating and drinking before the Christmas eating and drinking season got underway was too good to refuse.


We were to be staying at Playa Fanebe (not a exactly a birding hot-spot) and my birding was restricted to a few hours each morning as I normally got back to base by 11.00 am for a late breakfast. Since it didn't really get light until nearly 8.00 am the time available was pretty restricted so I didn't go too far afield. The only exception was when we all visited Teide taking in the Las Lajas and Merendo De Chio picnic sites looking for the fabled blue chaffinch.
The local places visited were the area immediately south of Palm Mar out as far as Puenta de la Rasca, The area just north of Montana Amarilla and two places mentioned in Wanstead Birder's report on Tenerife at Fraile and the barannco just west of Amarilla Golf.

The first morning I just had a wander along the prom at Playa Fanabe up to the harbour in the hope of some gulls which were conspicuous by their absence then back along the prom to a garden area. As I said no gulls but the prom was good for getting up close and personal with Canary Island Chiffchaff and I found a small flock of Spanish sparrows. These were seen in other areas but it was easiest to photograph them on the green areas of the prom because they were pretty numerous (especially the chiffs) and used to people being around. 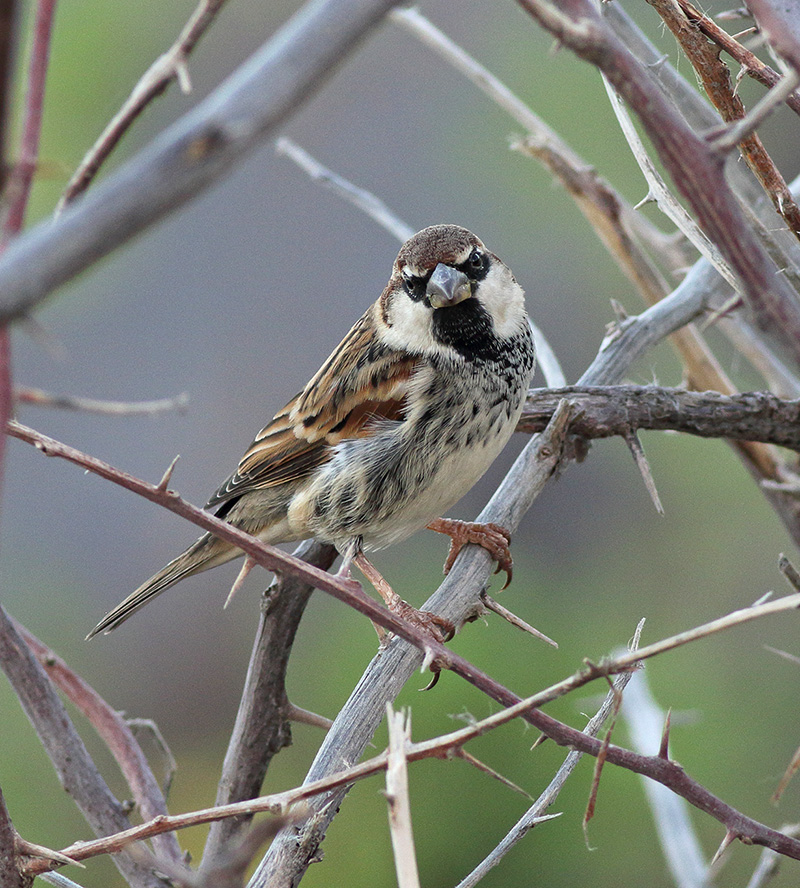 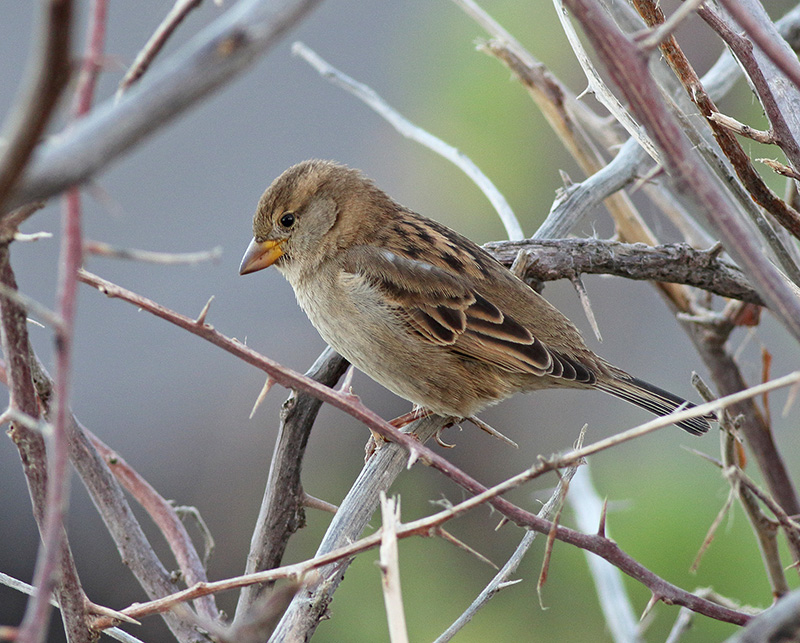 In the afternoon Pete and I took a drive out to Palm Mar (about 10 minutes away) and birded the area out to Puenta de la Rasca. This area, which is typical terrain for the south of Tenerife, was effectively desert with lots of volcanic ejecta - porous rocks of various sizes blown out of the numerous volcanoes that litter this island. In places the ground is just about 100% ejecta and vary hard going, in others it was mainly sand with just a small number of rocks. The vegetation is almost exclusively cacti and a succulent that looks like a small bush. There was no grass and very few bushes (dead or alive). We went out at 3.00pm and for the first hour saw next to nothing but eventually a few birds started calling and by following the calls we were able to find a number of Berthelot's pipit (an edemic to the Canaries) and a pair of great grey shrikes (Lanius keonigi). 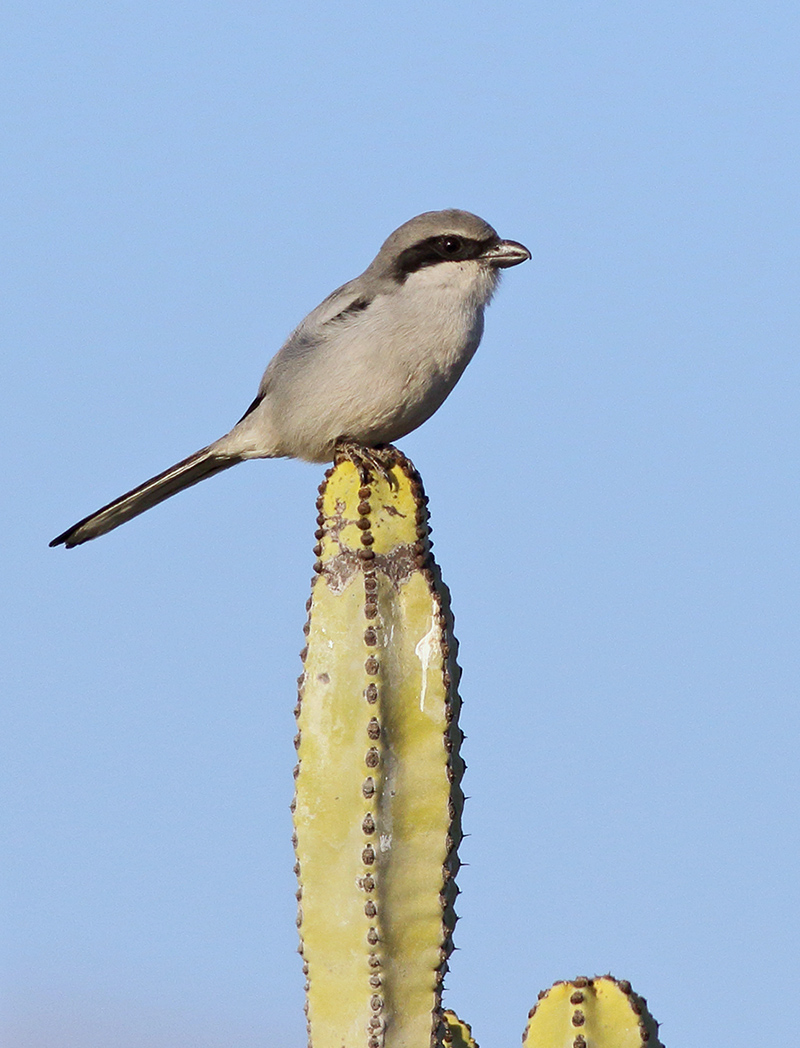 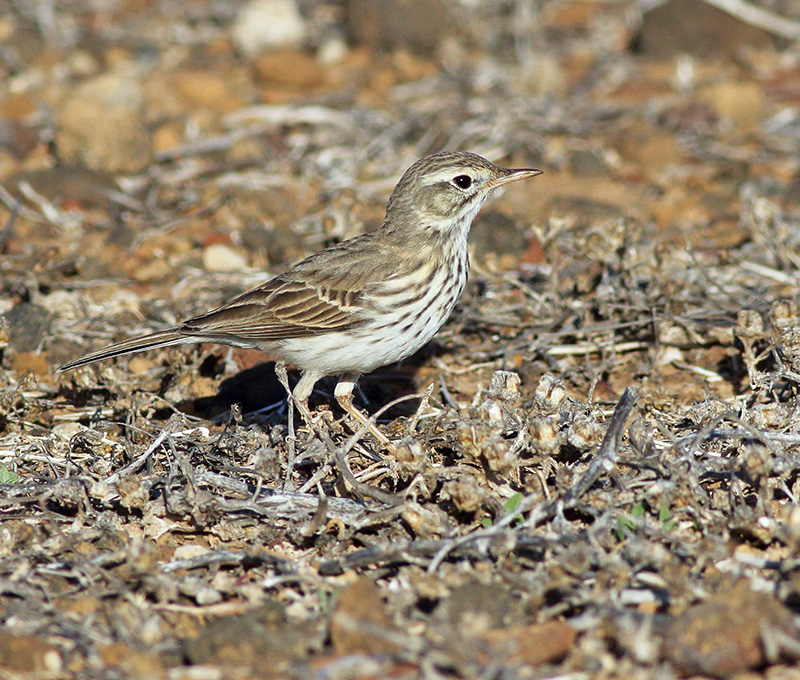 We also had glimpses of a couple of Sardinian warblers and heard something that I now know is a spectacled warbler.
So not a huge haul for day 1 but I'd seen around half the species I had on my wish list.

Day 2 started at Montana Amarilla where we saw another pair of great grey shrikes and a kestrel but the area was so rocky we were in danger of turning an ankle so we gave up and went over to the barranco at Amarilla Golf.
Immediately on parking up in the Hotel Cansani car park (beside the golf club) we heard then saw hoopoes (~ 6) plus several calling chiffs. As we wandered down towards the sea we came to the rear end of the stables where some of the hoopoes were feeding in amongst the discarded horse bedding. Unfortunately this was about 20 feet above our heads but I managed a few shots even if the setting was not what would have been desired. 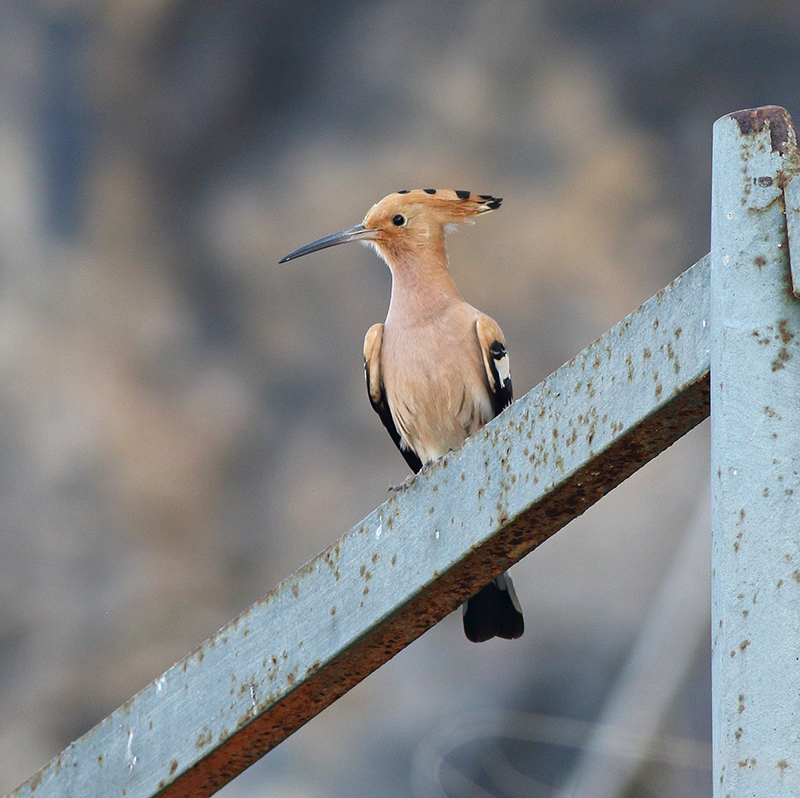 Also at the stables was a kestrel and another raptor that I think was a barbary falcon but indecision as to whether to look at it or get a photograph as it went past meant I succeeded in neither. We also found another (very distant) gt grey shrike and had distant views of a spectacled warbler - the only one I actually saw.

The next day was our trip up to Teide. The route up via Vilaflor takes you past the Las Lajas picnic site where we stopped for an hour or so. On arrival I could hear a few  birds but most of them seemed to melt away before we saw them. Scanning the picnic tables showed no birds at all though a woodpecker drumming down the hill gave us something to search out and our first photo opportunity.
On returning to the main site we were watching a few canaries high up in the tree when I spotted a blue chaffinch at the base of it feeding on a large log. It seems the ranges have set up a small feeding area (a small offering of seed) and a drinking pool.
We moved closer then sat around and waited. 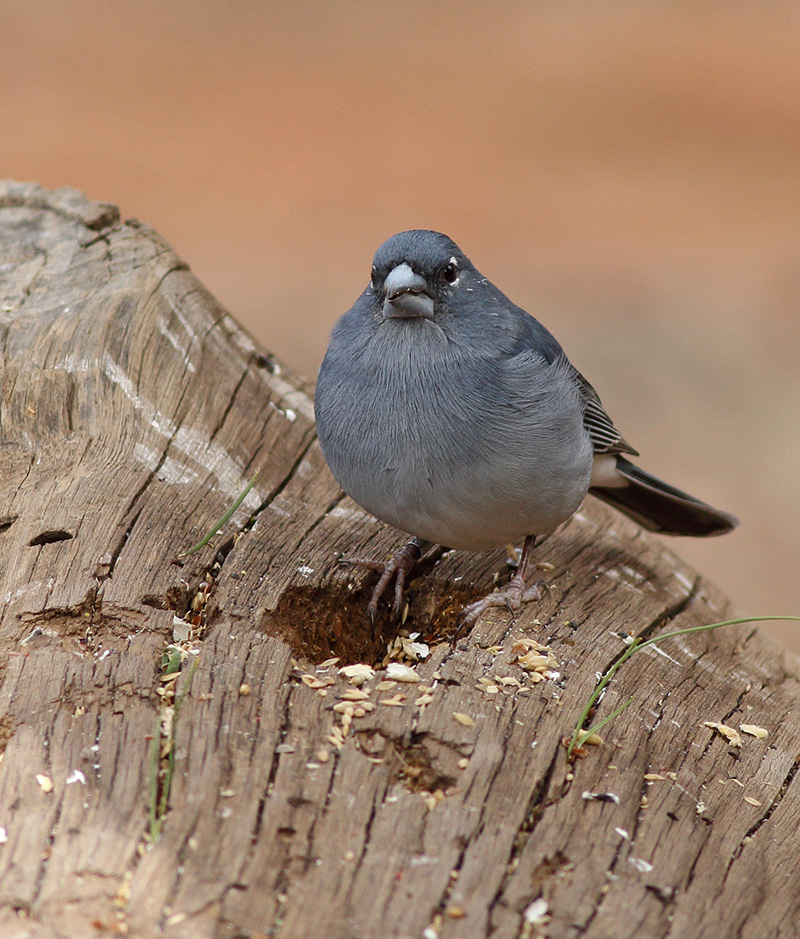 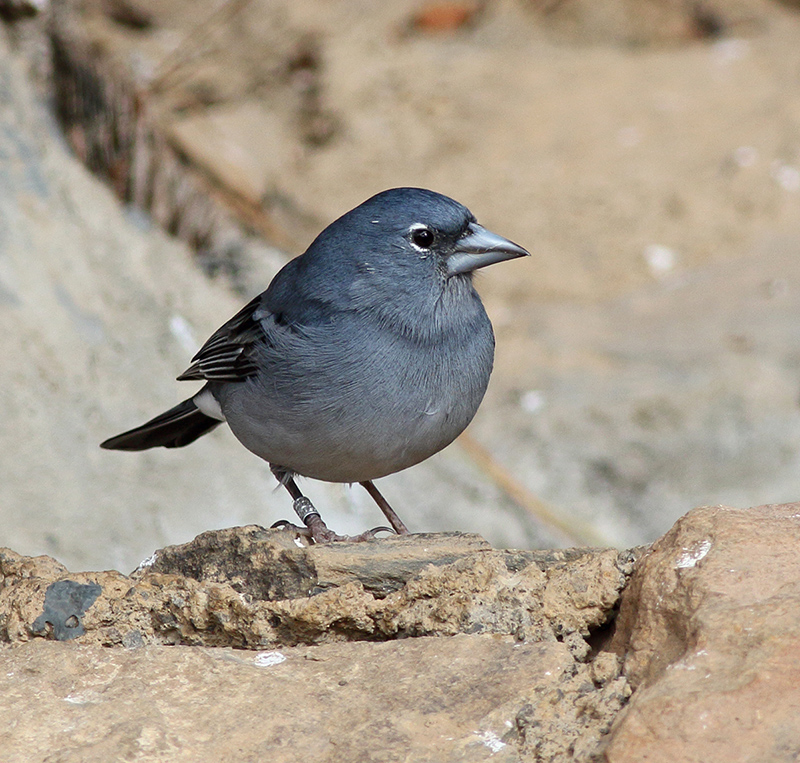 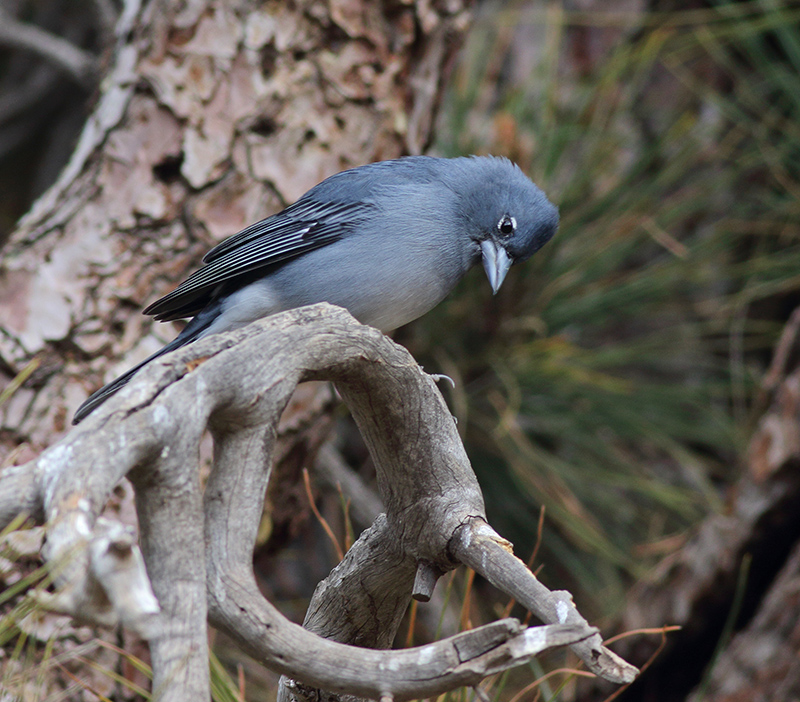 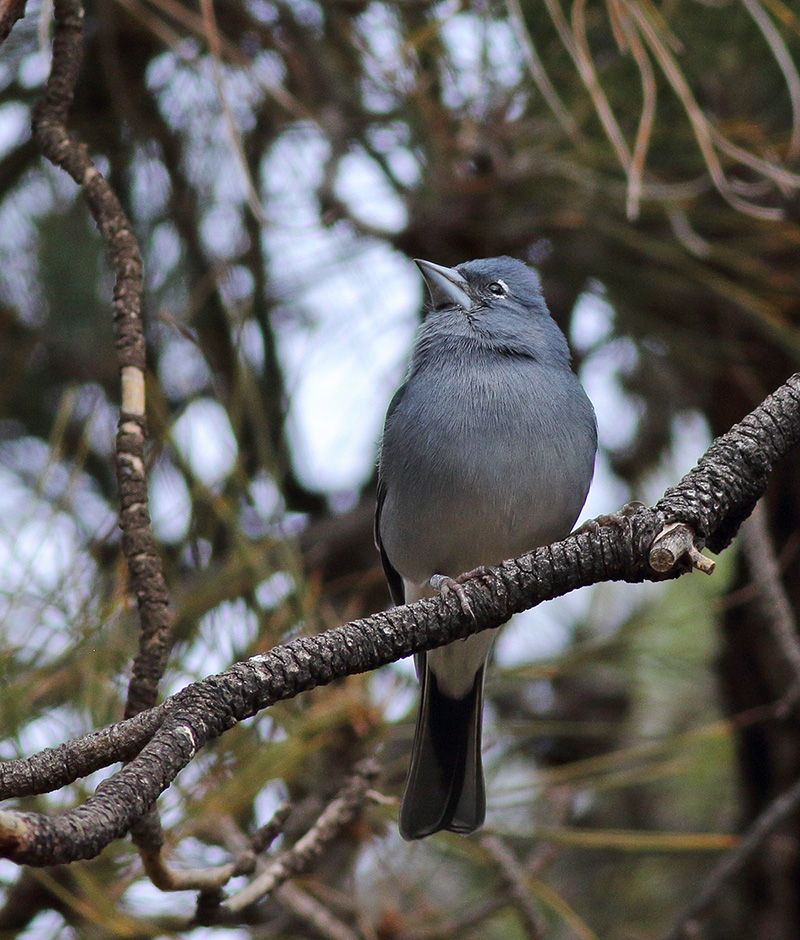 As we waited for the blue chaffinch in came half a dozen canaries, Canary Island blue tit (an African Blue tit) and the local variety of great spotted woodpecker. 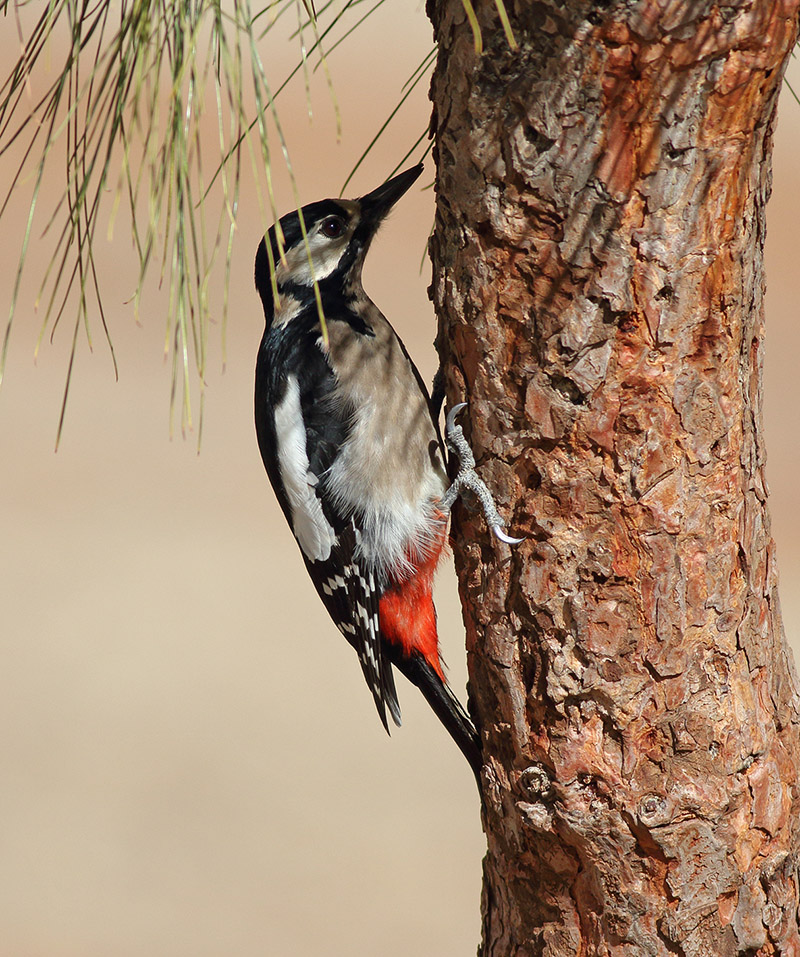 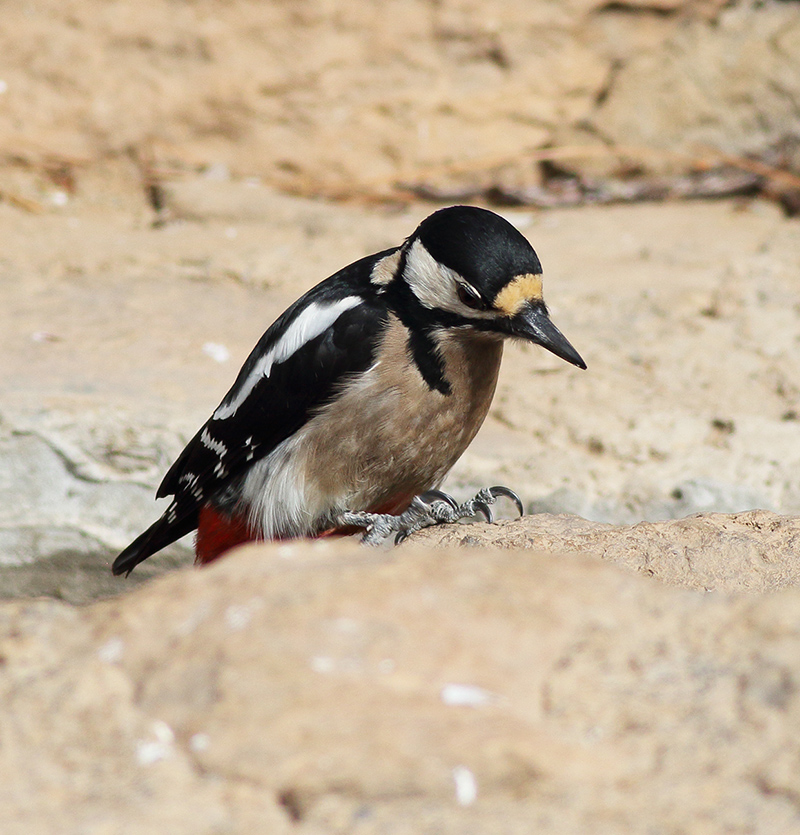 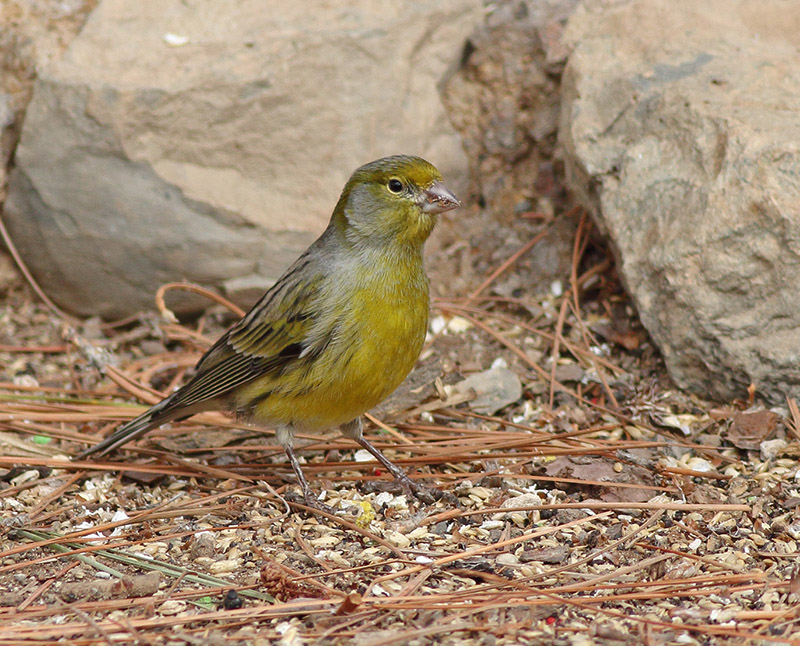 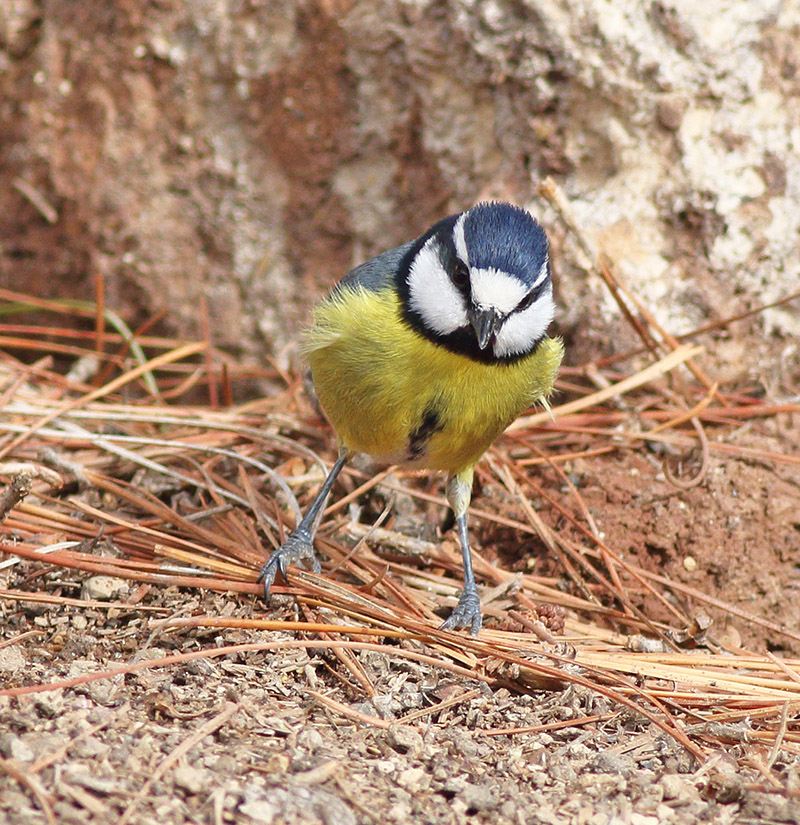 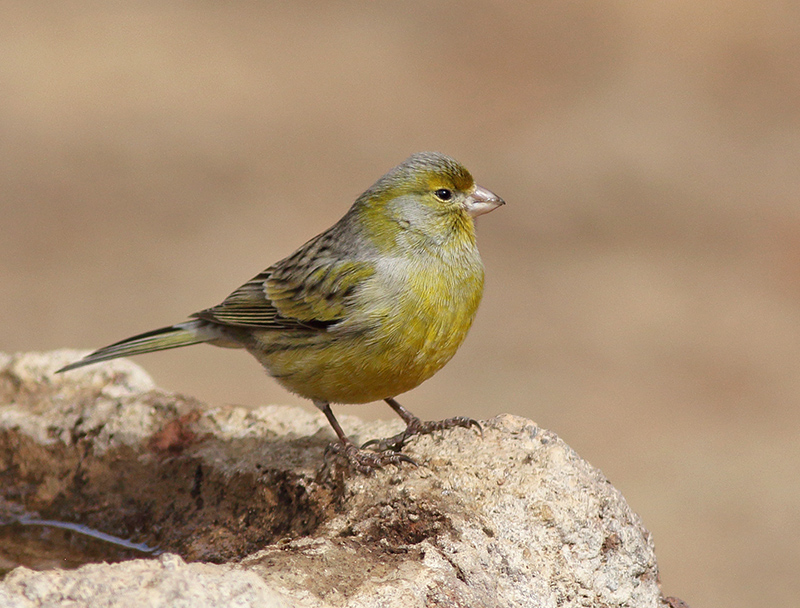 All in all an excellent hour or so.

After that we went up to Teide (3500m) where I felt a little faint due to the altitude but whilst sitting around waiting for the others to finish their exploring I spotted a small bird flitting around. All sorts of thoughts went through my head because the temperature up there was -2C - snow bunting? snow finch? alpine accentor ? Needless to say I had to go and look. I found the bird and without doubt it was a Berthelot's pipit. I was both amazed and disappointed.

We came back down the mountain via the TF 38 which eventually takes you past Chio but on the way down you go past the Merendo de Chio picnic site. Here we saw more blue chaffinch (~5) but these were chasing each other around and we also found a number of Berthelot's pipits rummaging around under the tables plus a very cooperative one out in the open. 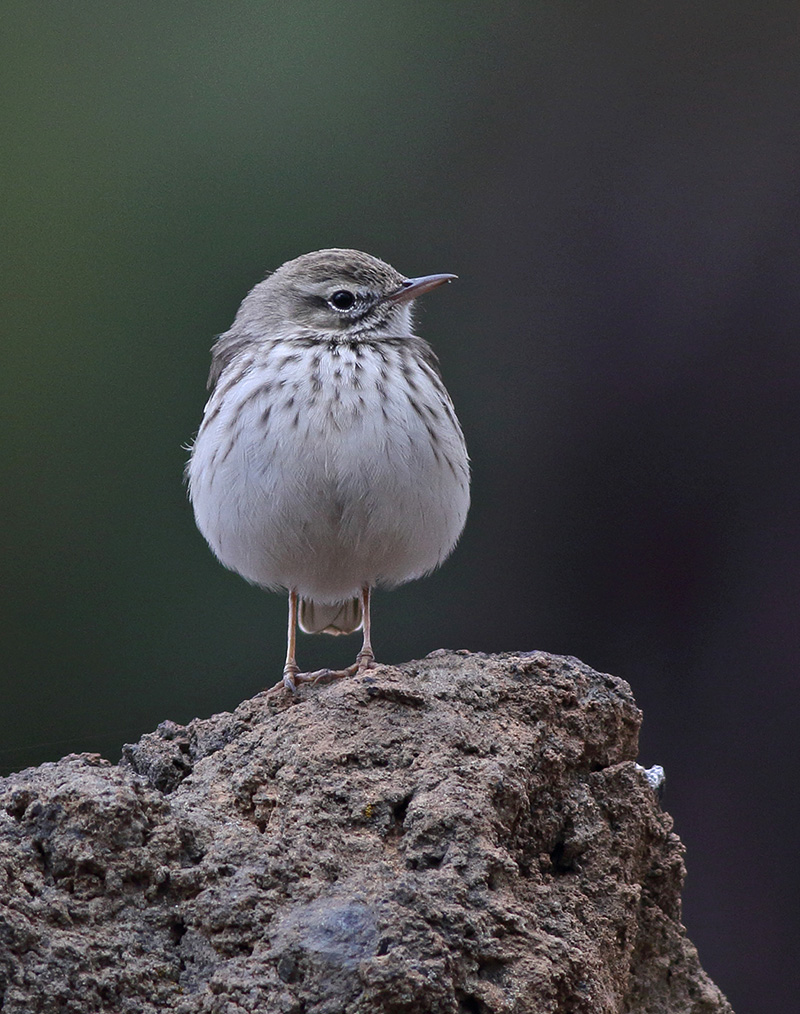 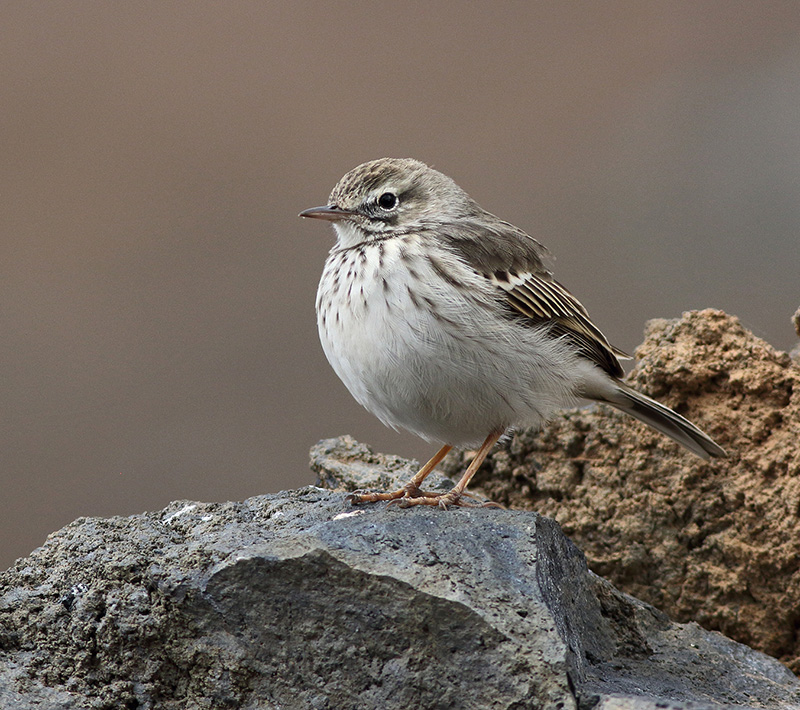 The next morning I was up a little late so popped along to Fraile (a site mentioned in Wanstead Birder's report). All the normal stuff - chiffs, pipits, kestrel but I was determined to get some improved images of shrikes. Eventually I got close to one. In fact I was less than 10 yards from it in the end. 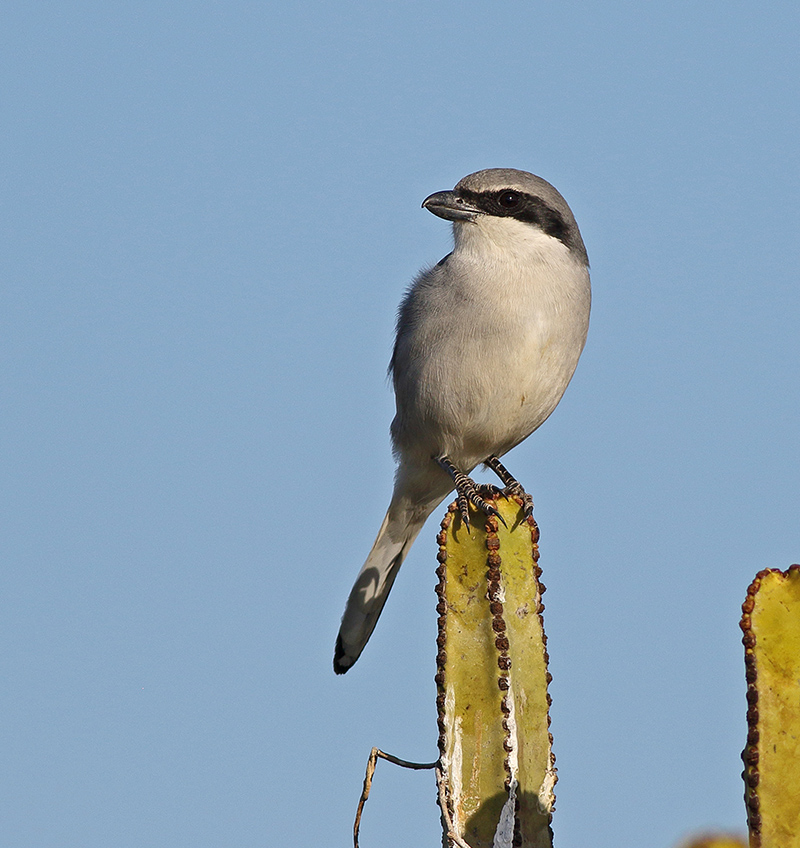 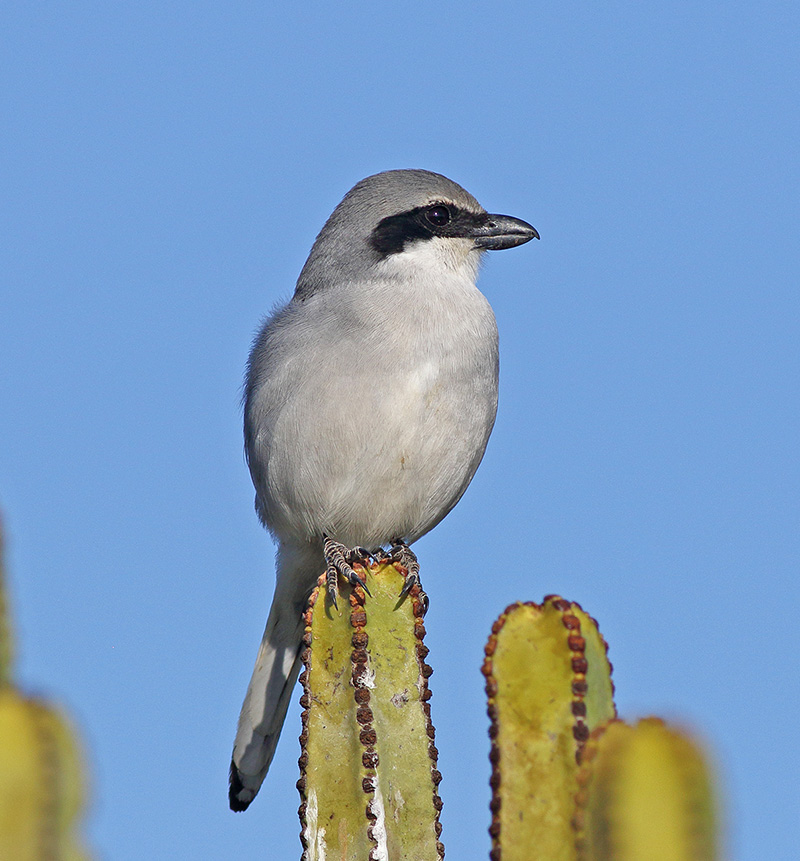 Being very bright you had to be on the sunny side of it so all the shots are head on.I never managed a decent side shot.

Yellow legged gulls were seen distantly every day but the only place I got near one was at Los Abrigos - a small harbour with a number of pleasant cafes so you can have a beer or ice cream in the afternoon sun whilst waiting for one to come and pose. 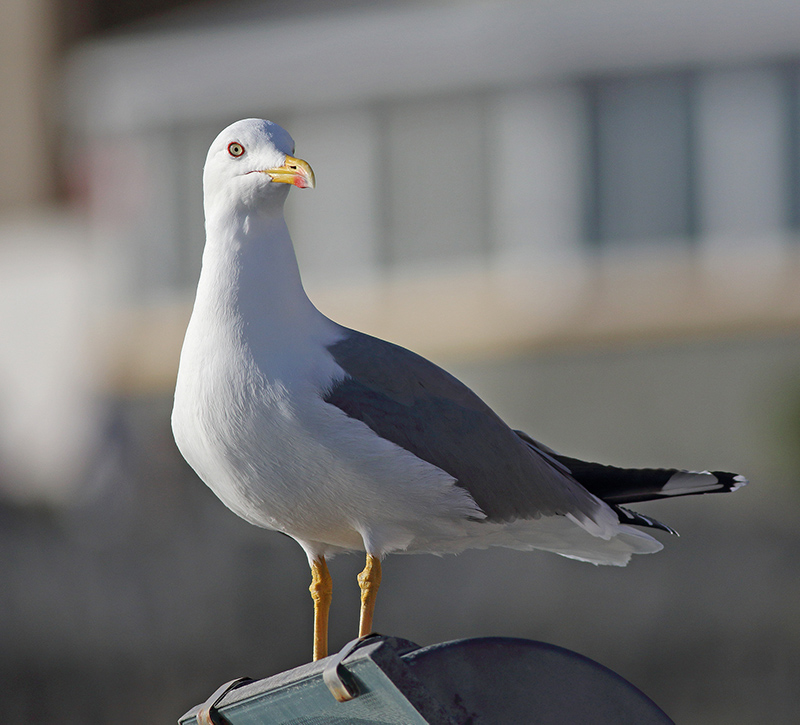 Our final outing was to Amarilla golf again but we spent most of the time just behind the beach where a pool has been formed. Here we saw grey wagtail, common sandpipier, redshank and a black necked grebe. Eventually the grebe came very close but what with the light and the fact that it was behaving like a phalarope whilst feeding on the surface insects photography was a little taxing. Still take enough and some will come out ok. 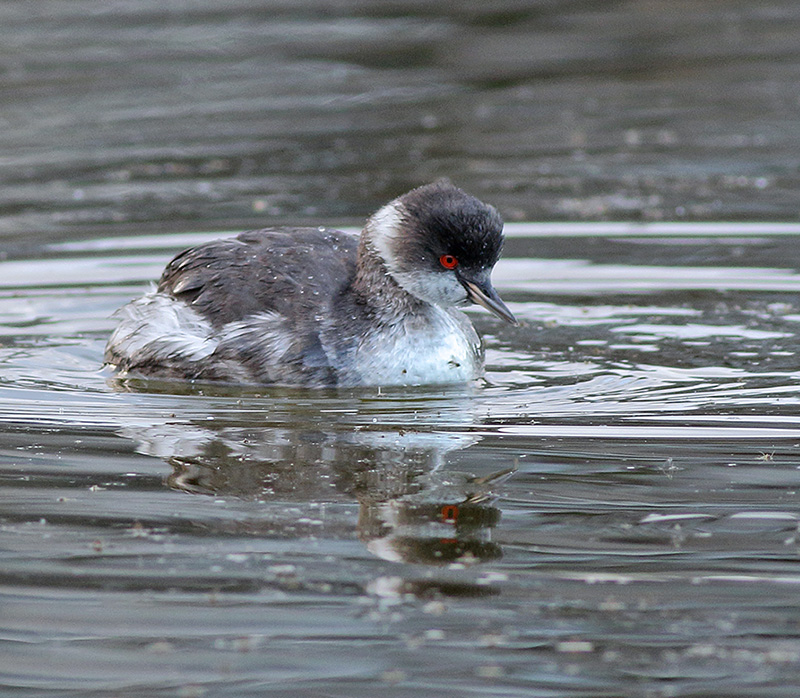 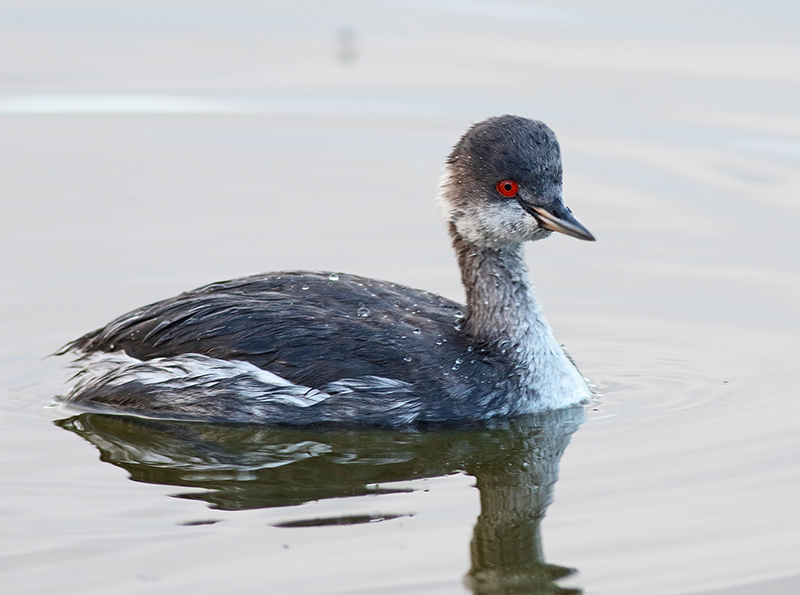 After the grebe we went back up to the stables to try for the hoopoe again but there was only one around and it stayed distant but another shrike posed for the camera. 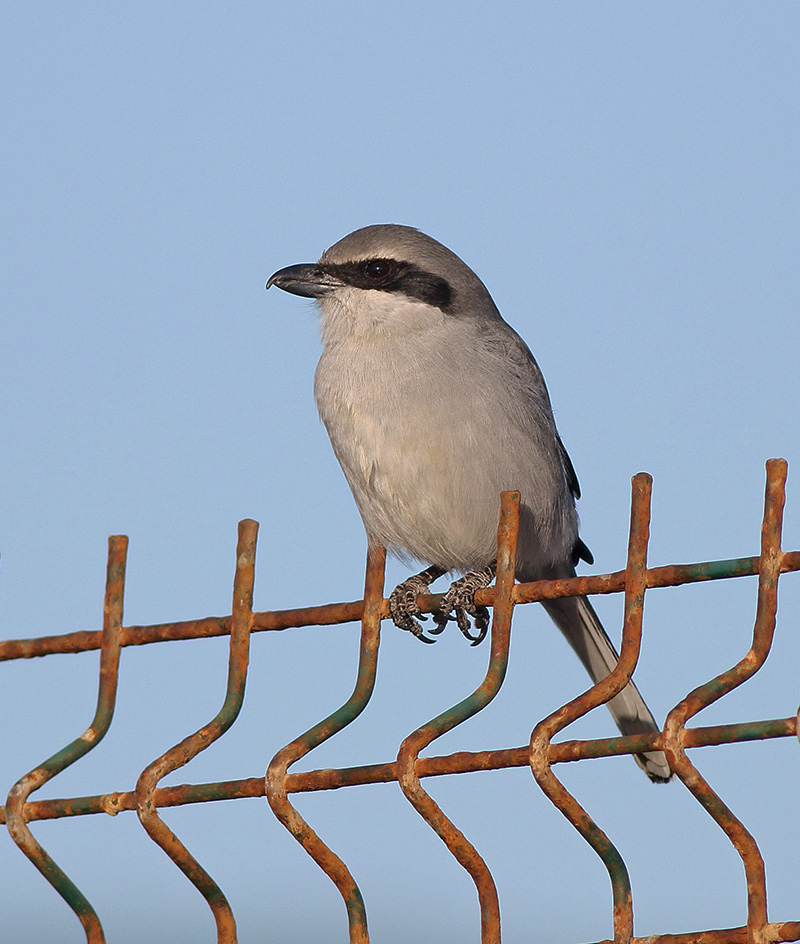 From Amarilla Golf we took the back road to Las Chafiras where a small resevoir was home to around a dozen little egrets and 4 spoonbills. 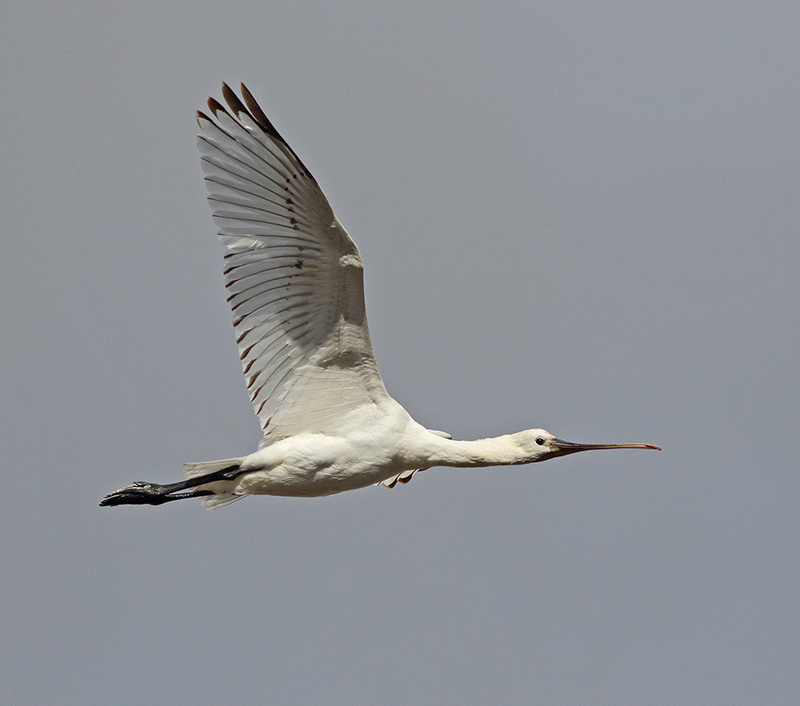 Our final stroll along the prom on the last afternoon rewarded us with lots of chiffs, a kestrel and a pair of sanderling roosting on the rocks less than 10 yards from where everyone was walking past. Needless to say no one else even noticed them. 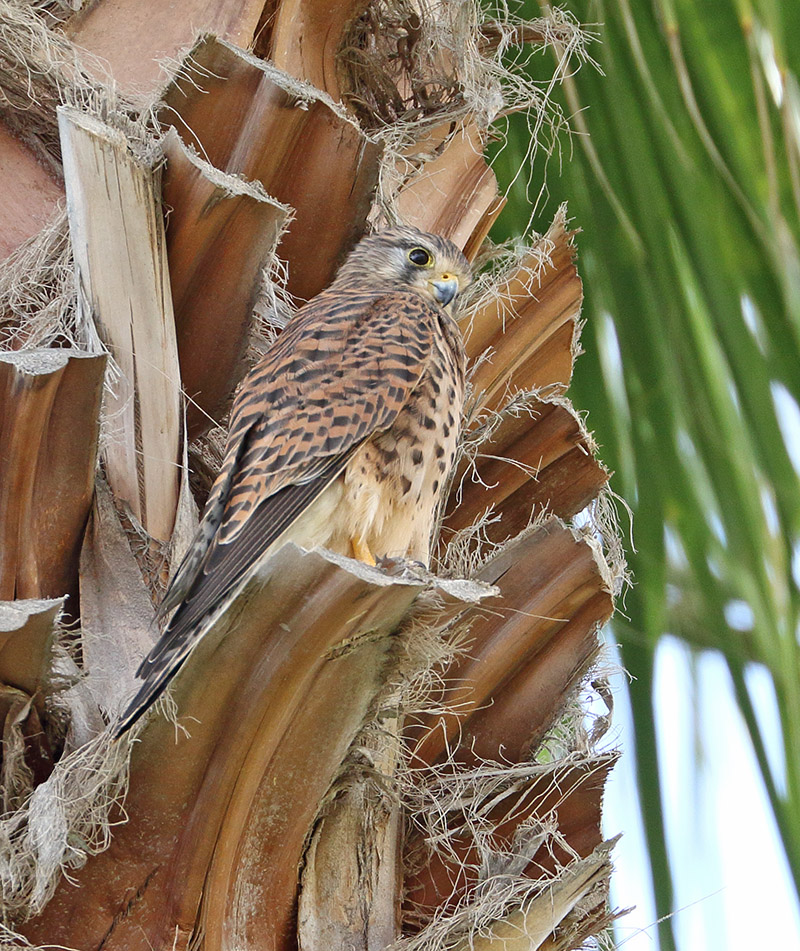 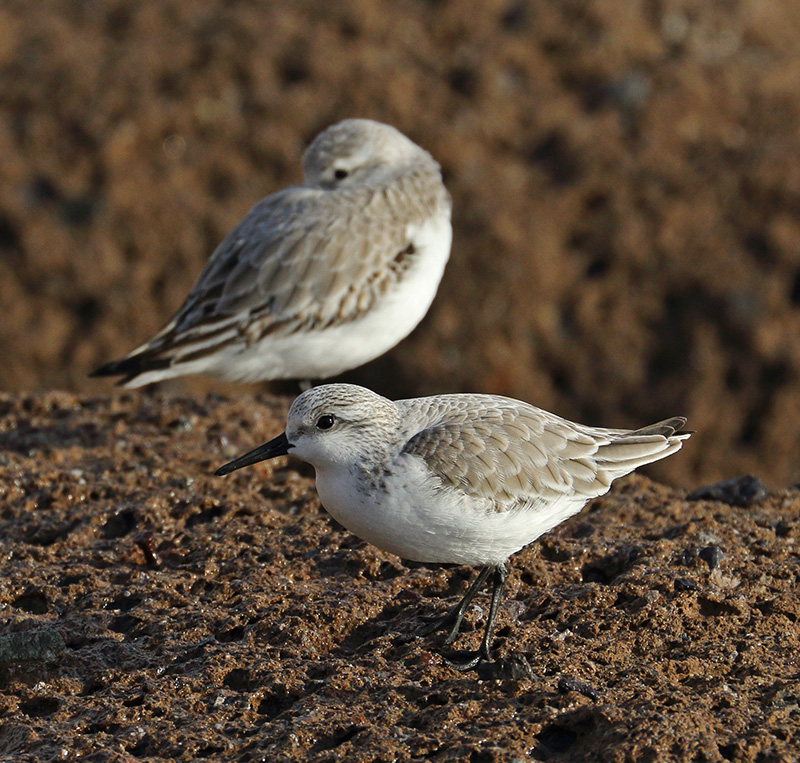 So what about Tenerife itself. Without doubt it is an amazing island offering desert on the coast and sub zero conditions an hours drive away. The scenery (away from the urban sprawl) is spectacular with extinct volcanoes (large and small) everywhere and the lava fields around Teide look like a different planet.
The birdwatching itself was quite strange in that the bird density, even of the frequently seen birds, was quite low so required a bit of searching but having found them proved reasonably easy to get decent images of.
If you go and stayed at Palm Mar or Golf del Sur you could get away with not having a car Berthelot's Pipit and Great grey Shrike are but a short walk away but I would recommend hiring one if you want to go further afield. We used CICARs and would recommend them - the price quoted (includes insurance) is what you pay and the pick up and drop off could not be easier.

Posted by Greater Kent Birder at 18:11