My latest bird watching trip was to the Yucatan. As normal this was a general holiday with birding being conducted mainly before breakfast on or near the hotels we (my wife Angie and me) were staying at. As normal I'd read what I could find out about the Yucatan on the web and selected areas to stay at based on them.
The Baldric like cunning plan was to Fly to Cancun (BA now do daily flights arriving around 4.00pm) pick up a hire car and have the first 3 nights near Puerto Morelos - more of a Yucatan village rather than one of the colossal resorts that line Yucatan's east coast - and visiting the local botanical garden. Next stop was to be Rio Lagatos for a couple of trips through the lagoons/Biosphere with Diego Nunez. From there we'd go to Chichen Itza, the famous Mayan ruins, staying at Hacienda Chichen Itza which has large gardens and it's own  nature reserve with our final stop being by the Caribbean near Tulum for some R and R and a visit to Sian Ka'an Biosphere at Muyil. Easy..............
Well no.....anything but..
As always my planning started almost immediately I'd got back from Sri Lanka (March 2016) and I started thinking about booking lodgings etc around July. A quick check on flights - yes everything available there, ditto Chichen Itza, an email to Diego Nunez requesting lodgings and bird watching tours....nothing. Try again............nothing. Well I waited about a month and then started worrying because repeat visits to Booking.com etc showed that my short list of possible hotels/apartments was disappearing fast. Finally, late August I gave up and revamped the details, ditching the Rio Lagatos part, giving us another day at Chichen Itza and and extra day on the beach. I booked the flights and booked Chichen Itza ok but my other choices were gone. Bugger.
Now it's easy to find accommodation on the Yucatan coast. There are loads of very cheap lodgings and loads of very expensive huge resorts (many eye wateringly expensive and all-inclusive) what's not quite so easy is finding decently priced hotels/apartments by the sea where you can walk along to the beach to a local restaurant and it was clear that most of the desirable places had sold out. I did find nice places to stay but the choice was very limited and the cost a whole lot higher than anticipated. Our first 3 nights ended up at Senses Riviera Maya (a few miles south of Puerto Morelos) and our last 6 nights  at Las Villas Akumal ( 20 miles north of Tulum),
A couple of weeks later I got an email from Diego Munez saying everything was ok!!!! He'd been busy. I told him it was too late. I talked to an American birder in Chichen Itza who also had problems with Diego Nunez - he didn't even get a reply. So if booking with Diego Nunez get the arrangements made very early and be prepared for less than satisfactory customer service.
The final bit of the logistics puzzle was car hire. Again after a bit of research I'd settled on Easyway, Cancun Airport where we hired a VW Gol (that's not a typo). I'd highly recommend Easyway both on quality of service and price.
Phew. That's a long intro. Now to the holiday.

Arrived ok, through immigration and customs OK - the latter being interesting because as you come through customs the official checks your documentation and if everything is ok hits a button. If the light goes green you're free to go, if it goes red you and your luggage will be searched  - nothing sinister just a random check. Fortunately we got the green light. Out the doors and to the Easyway rep who whisked us off the their off-site location just outside the airport grounds and we were soon on our way arriving at Senses just before it got dark.
A meal overlooking the ocean, a drink then an early night.
Next morning I woke up early but at 7.00 am it was still too dark to bird really but I went out to check the beach for waders/gulls/terns. None. A little disappointing but as I was standing by the infinity pool a great kiskadee landed on a hand rail less than 4 yards away. I got the camera out but had no shutter speeed so I just watched it - it was after all on my must see list. Then it flew down onto the beach and returned with a small fish. What sort of flycatcher was this? I had to try for a shot so out with the camera and at ISO 4000 (!) I had 1/160th sec I managed an image or two. 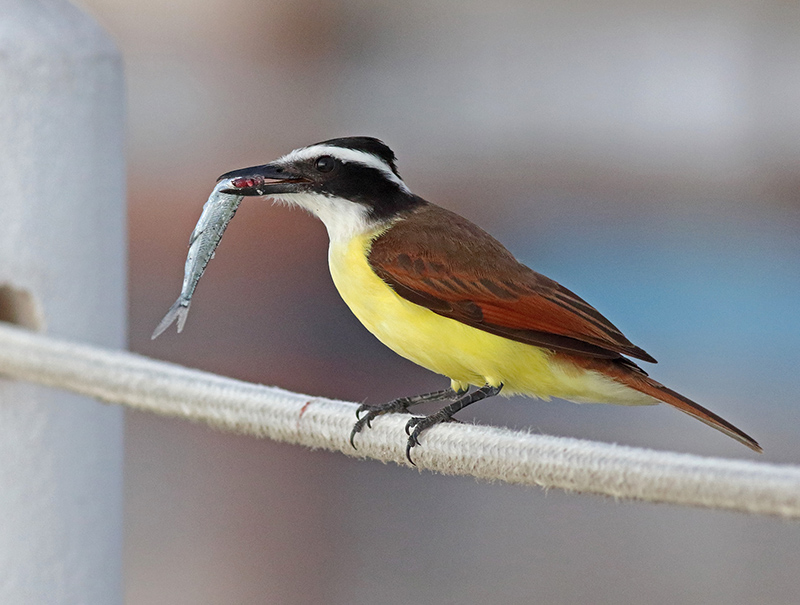 After 10 minutes it flew off so I went to survey the road/car park outside - the hotel didn't really have any gardens and the local access roads were to be my "patch" for the next couple of days.
Nothing in the car part but in the service compound there were 2 species of grackle, a number of tropical mockingbirds and a red-billed pigeon (the light was still very poor): 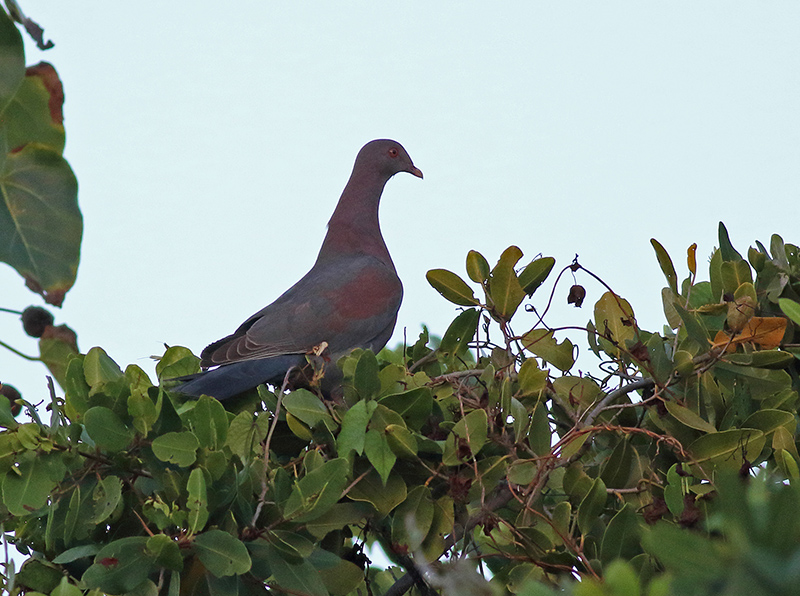 A slow stroll along the access road revealed a distant golden fronted woodpecker, a keel-billed toucan  flew past and by being patient I got some shots of my first ever American warbler - a yellow fronted warbler. 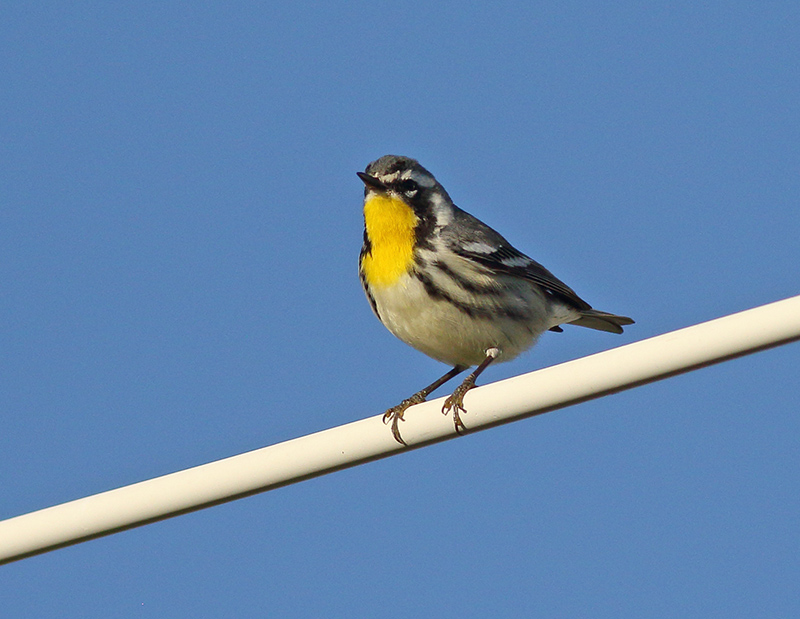 At the end of the access road I turned right into what was largely a residential estate but the (large) houses were widely spaced, there were plots of undeveloped scrub and the road itself lined with a lot of trees and bushes. A racket from a nearby tree showed 3 white fronted parrots. 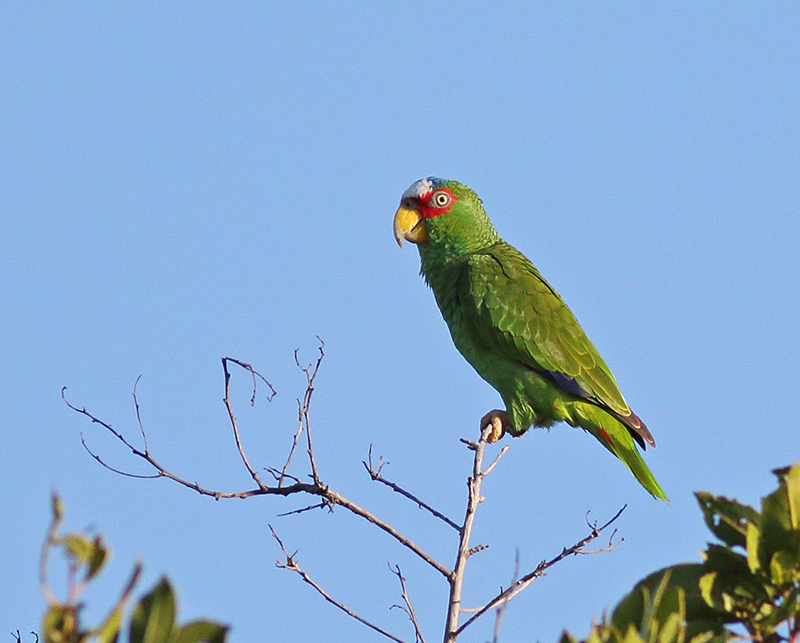 In one undeveloped plot there was what looked like a large puddle but in fact it had fish in it - plus a little blue heron, an adult and juvenile northern jacana and two more kiskadees. One of which landed less than 3 yards away - I had to back off to get him all in shot! 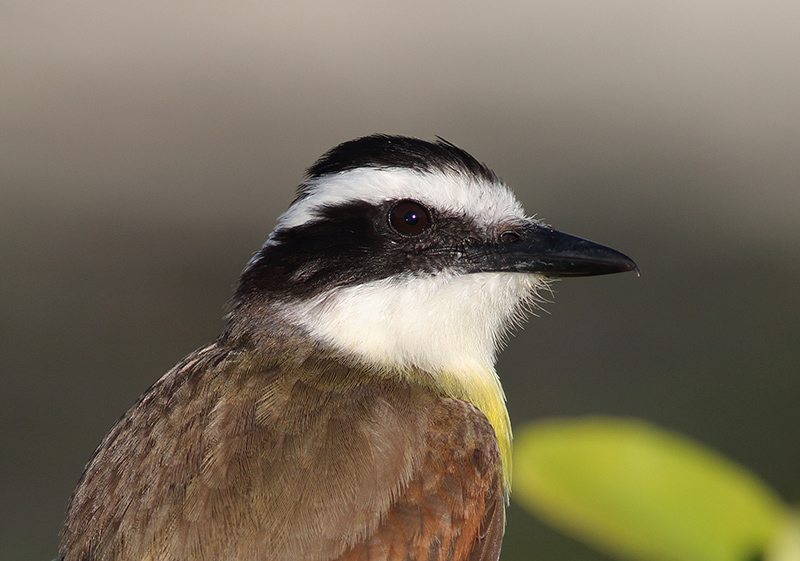 Birds calling from a nearby tree revealed a male hooded oriole with what I assume was it's mate and a little later another oriole that turned out to be a female orange oriole (needed the book to sort these female out!)


Well that was it for my first short outing. It was time for breakfast and a lazy day by the pool recovering from the trip.