After breakfast Angie joined me for another circuit of my temporary patch seeing many of the birds seen before breakfast but in addition picking up a kildeer (there were 3 on one of the empty plots) and a female magnolia warbler.

I also spent some time trying to decide whether I was seeing Tropical or Couch's Kingbird (or both) on the wires (it seems they were split in 1966). There are some minor differences in beak size (tropical has the largest)  and the fork in the tail (tropical most forked) but the easiest was to tell them apart is by call. However that requires you knowing the call and find them calling. Most were silent. In the end I resorted to videoing any that did call and checking against Xeno canto so I know I saw both.


As the day got warmer the vultures became more obvious and we saw 3 species - turkey (red head), black (black head) and lesser yellow headed vultures (yellow and blue head). None of the shots were good but they were good enough to be sure of the id.


The two vulture shown have white rear halves of the wings so can be confusing at a distance, the black headed (didn't get a good shot till later in the holiday so not shown at this time) has white wing tips only.
It was soon getting too hot to continue so it was off to the pool for some serious studying of the inside of my eyelids and perhaps a beer or two.


My relaxation didn't last too long as laughing gulls kept landing on the edge of the pool to have a drink and royal terns kept flying past temptingly. So back to the room for the camera - a 10 yard walk. How I suffer for my sport.

Whilst getting these shots I looked down to the beach - well hardly a beach as the waves were often lapping up against the concrete wall that supported the infinity pool. On the beach were now 4 species of wader:- turnstone, grey plover, sandling and a tiny wader (5 of) that I now know to be  least sandpiper.

The next hour or so was spent getting ridiculously close to these waders - often down to 5 yards. The only problem was the harsh light.

After the waders it was back to the sun bed only to be disturbed by the resident great kiskadee landing on the pool edge! 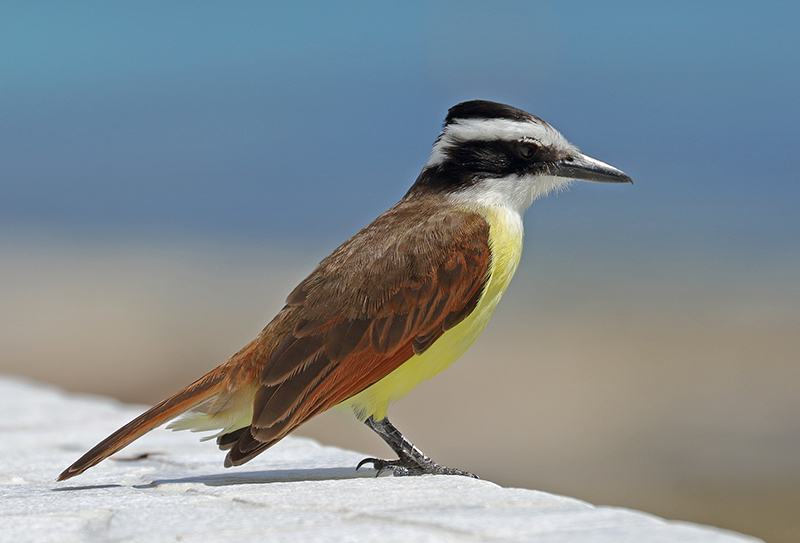 Late afternoon I did my circuit again adding collared dove, white winged dove and most surprising a black headed trogon.( I was later told the 2 local trogons aren't normally seen near the coast but the drought inland had driven them coast-wards.)

That concluded my first days birding. Nothing spectacular but very pleasing for what was in reality a housing esate. I'd racked up 31 species and at no time been further than 200 yards from the hotel.