After Trujillo we travelled south, past Seville and onto El Rocio.
We'd had a day visit to El Rocio several years ago but the festival was in full swing and the place was heaving. This time I made sure we missed the festival and we had a 4 nights stay to enjoy the place.
I had planned 3 outings during our stay; a morning visit to the local nature reserves at La Rocina (almost walking distance from the town) and El Acebuche, a drive out to the Jose Antonio Valverde Centre in the middle of the marsh and a trip to Huelva to visit the museum to Christopher Columbus (Muelle de las Carabellas).  Pre-breakfast was spent birding around El Rocio and in general late afternoon was spent around the visitor center watching the heronry.

Our first full day we went to the local reserves to minimise driving after the drive down the previous day.The reserves offer pleasant walks through the largely stone pine forests but as far as bird photography was concerned visiting the hides was a waste of time as they are sited 50+ yards from the water.
During our wanders we did get distant views of hoopoe, somewhat closer views of melodious warbler (one at each reserve) and watched a short-toed tree creeper. There were plenty of serin, goldfinch, chaffinch and blackbird but the serin as normal stayed out of view or very distant. We had a look around the Palacio del Acebron at La Rocina which shows the way people lived in the area in years gone by (well the wealthy ones!) 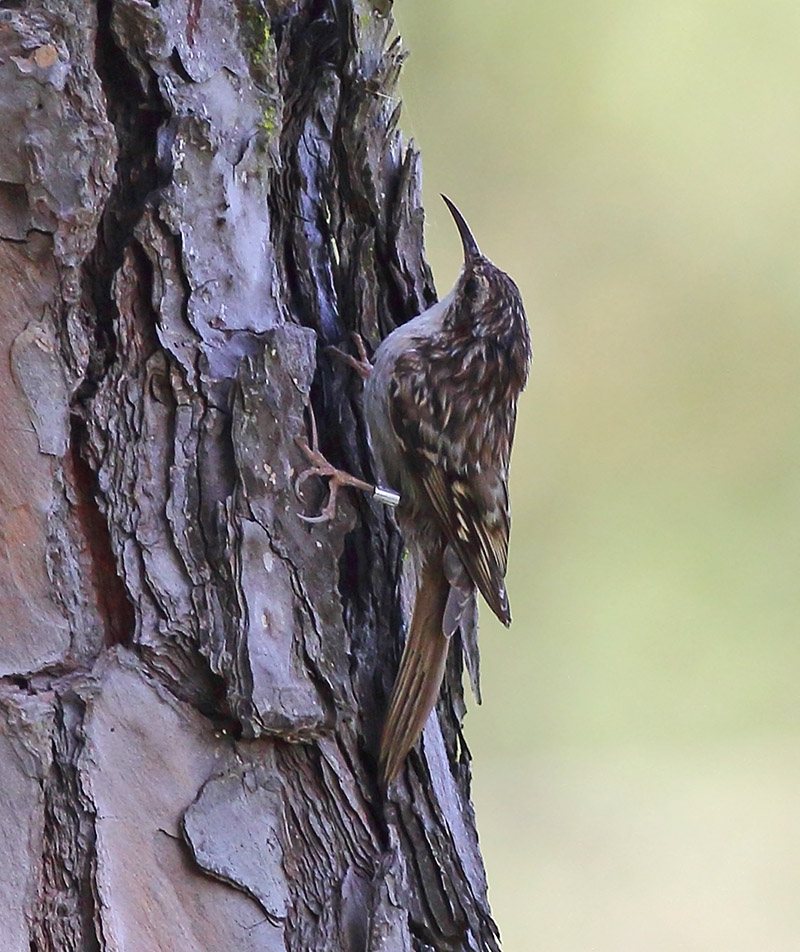 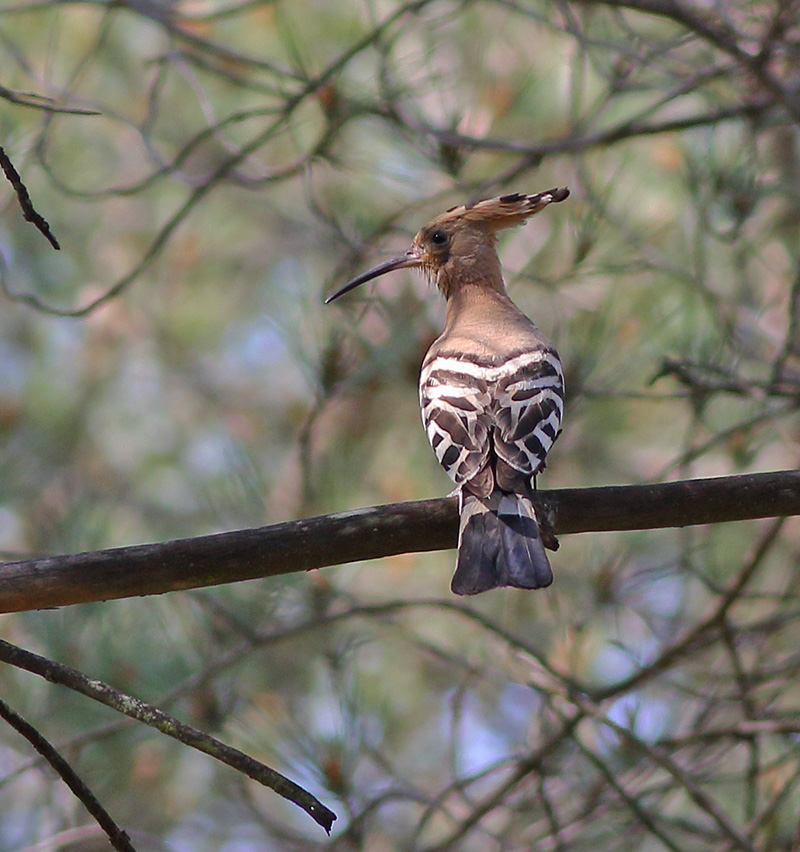 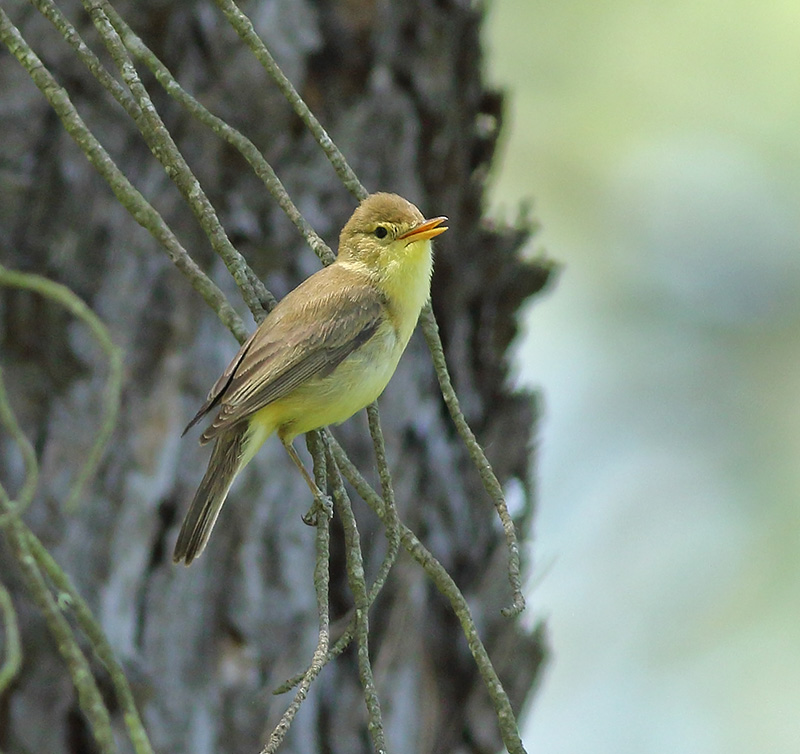 The highlight of the day was at El Acebuche where we sat and watched the azure-winged magpie coming to apples in the picnic area (Thanks to Wanstead Birder for this tip). We had a return visit after our trip to Huelva. The light was a lot less harsh on this visit and we used the only bait we had available - peanuts. The magpies loved them. I'm sure chopped peanuts would be better than apples because the magpies would have stand around picking up morsels of food rather then fill their beaks with great wads of apple. 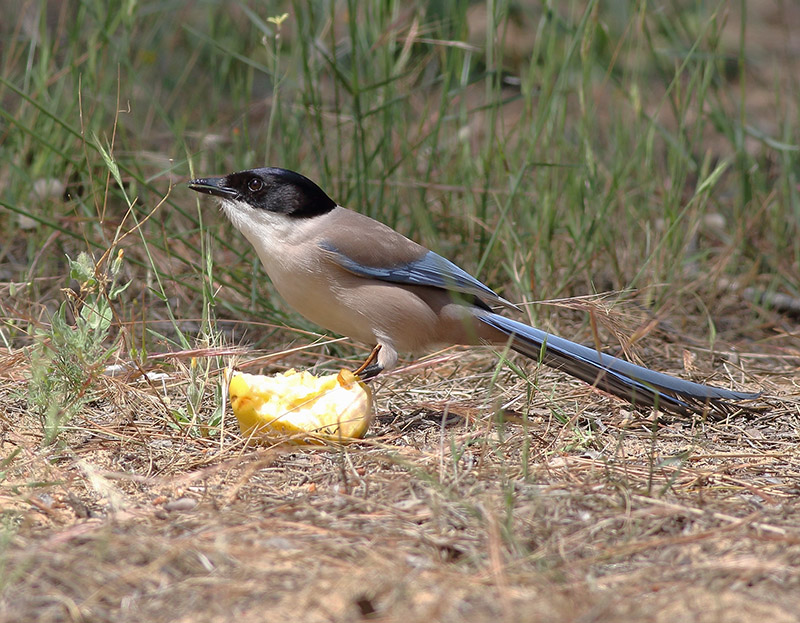 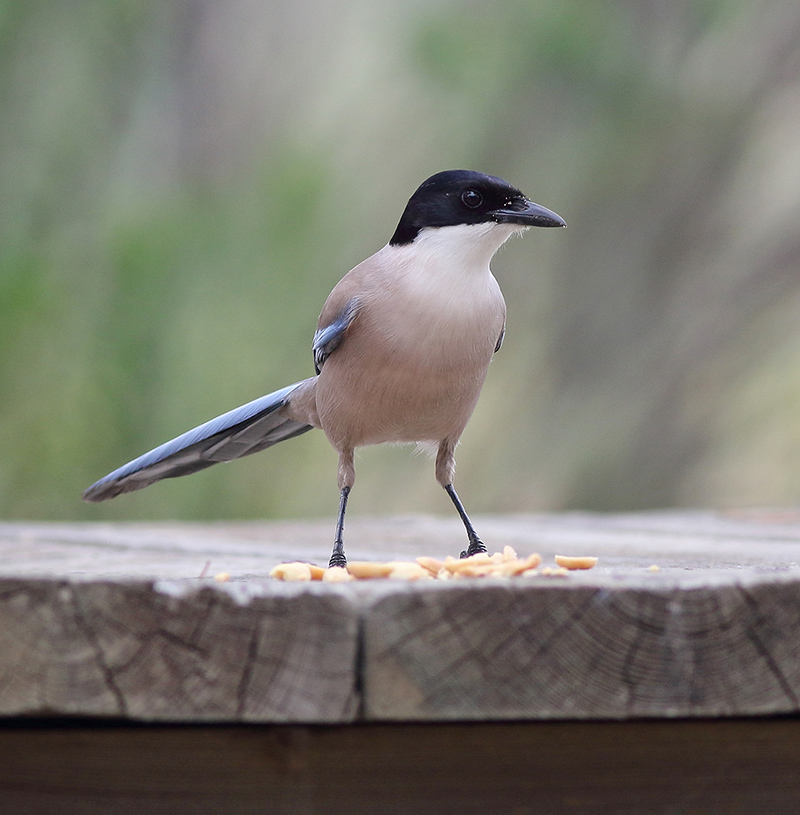 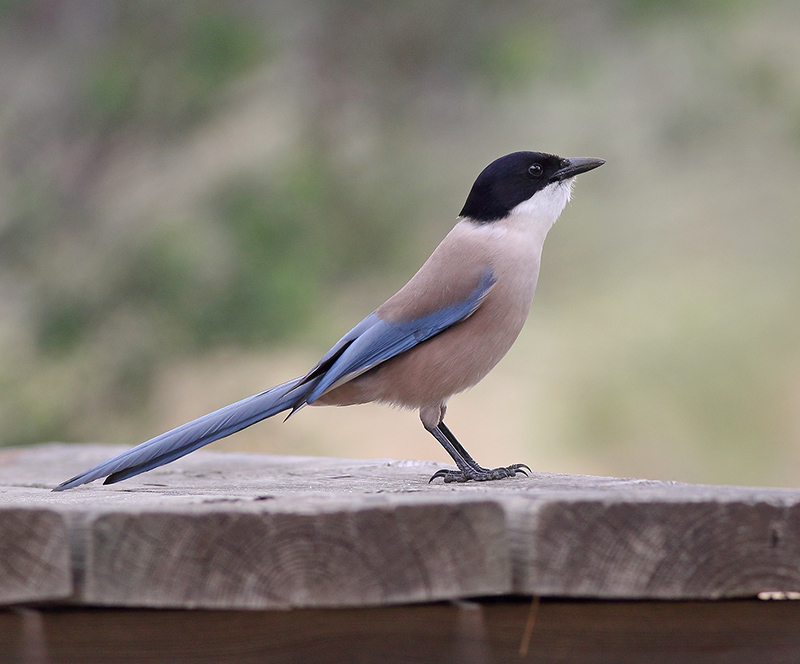 Our second outing was to the JAV centre. This is quite a long drive via Villamanrique but on the way we stopped at a place where we'd been shown bee-eaters on our previous visit (we'd been staying at Hinojos). There were loads of bee-eaters. It was "just" a matter of driving up and down the road trying to get close to them perched on the fence - which was not the most photogenic setting. Get out of the car and they disappeared.
Along this road we also had Sardinian warbler in a bush right next to the car and a pair of red-rumped swallows were very cooperative - both in a bush and on the ground. 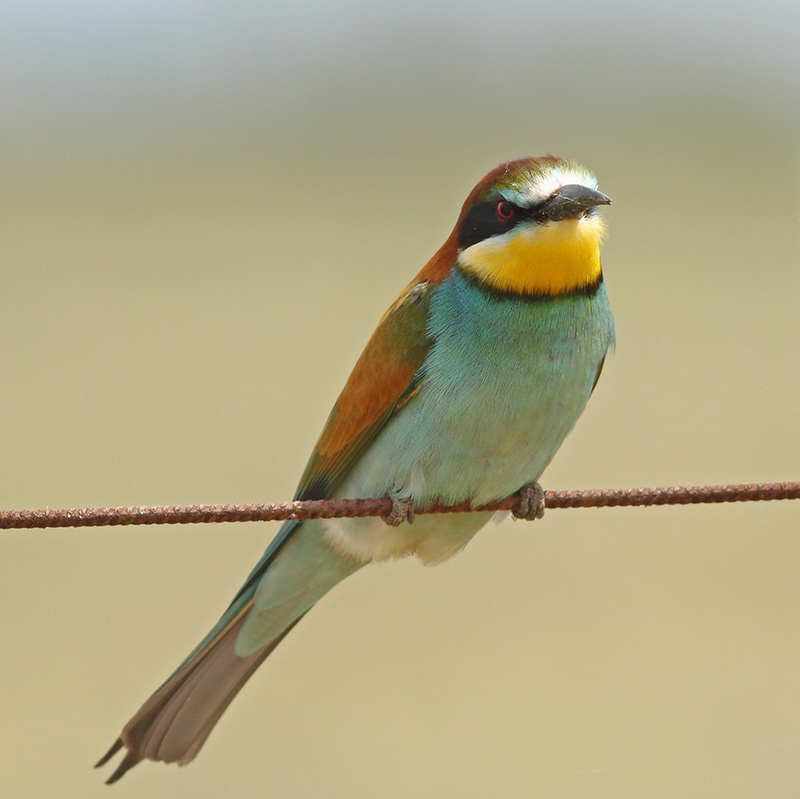 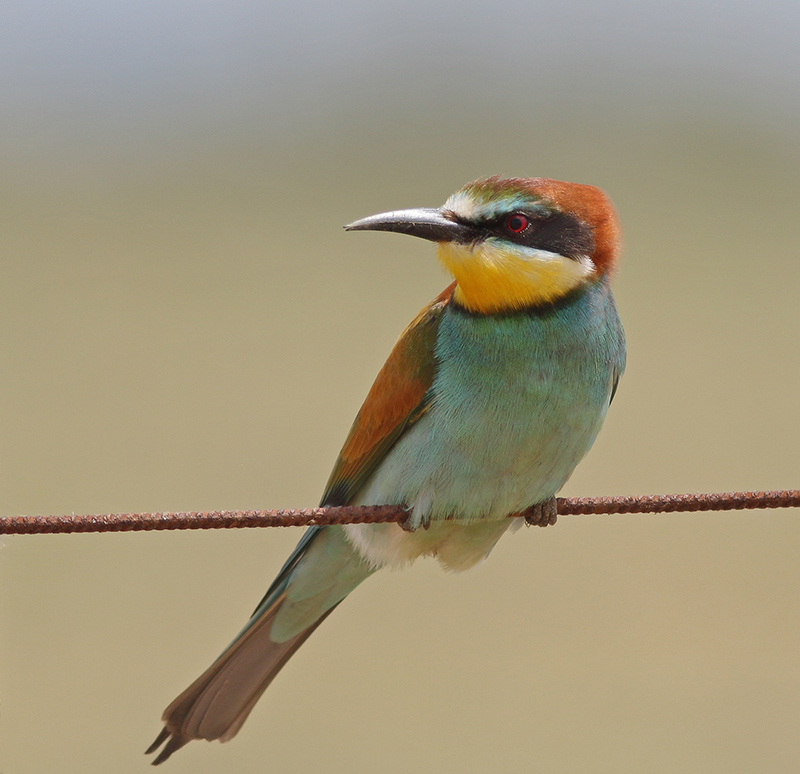 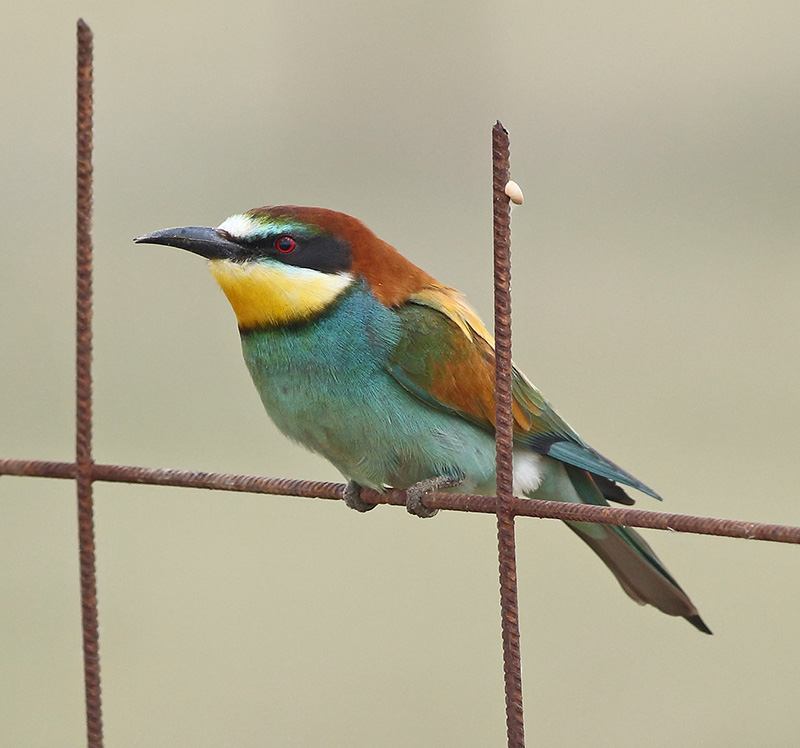 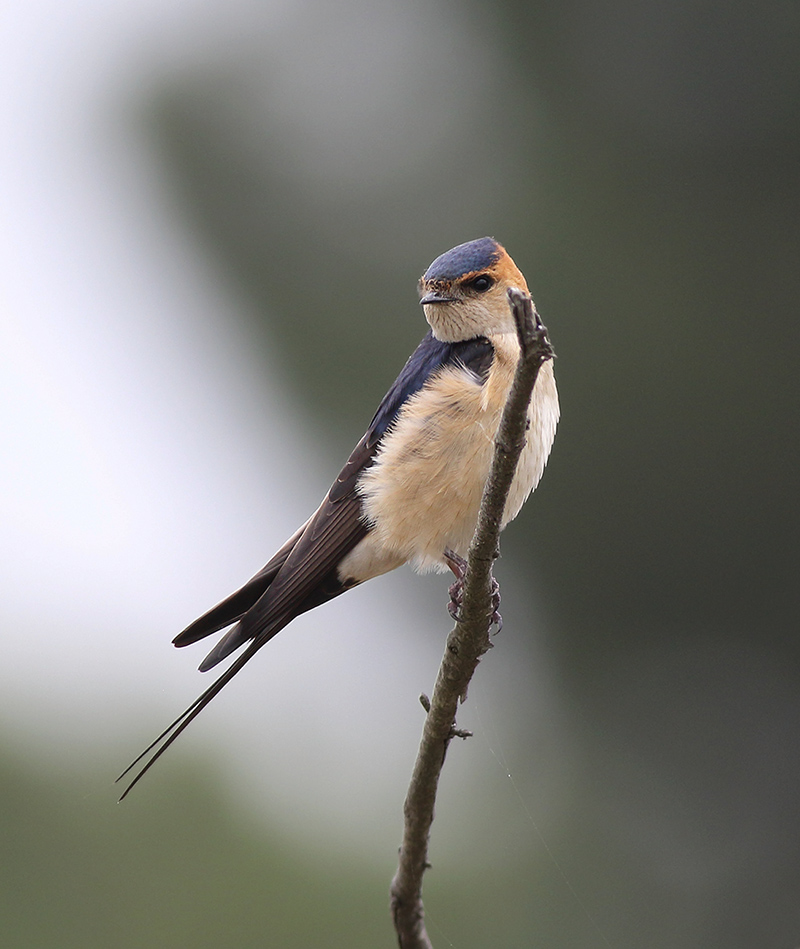 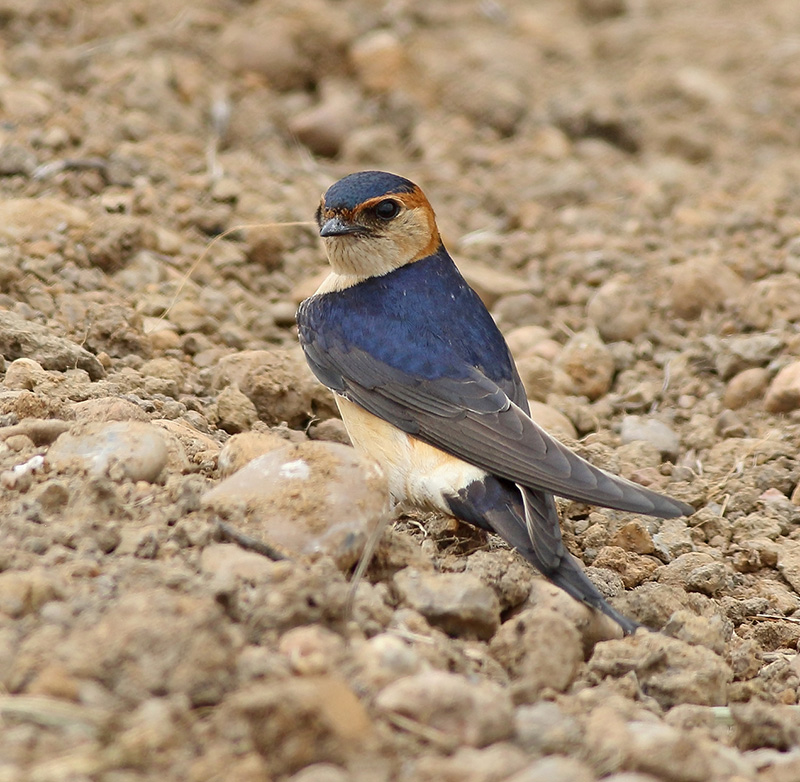 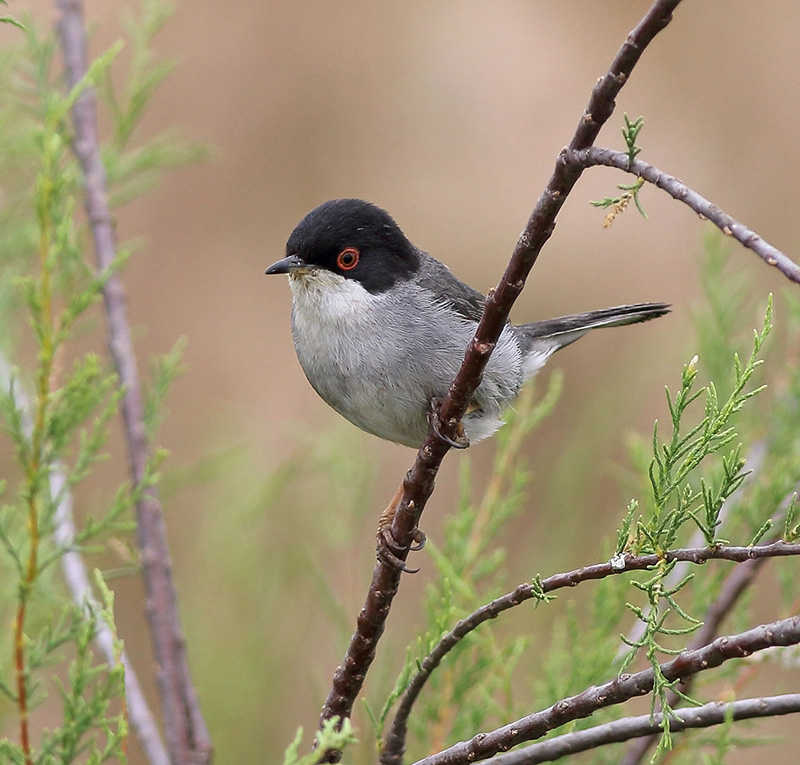 We then continued to the JAV Centre. Our previous route said "private road" but the centre was signposted. Unfortunately this alternative road was full of deep potholes and the journey (still  20km) took an absolute age. In fact on several occasions I thought about of cutting our losses and turning back.
During this torture we did find a flock of spoonbills with a couple of black storks and got decent views of a short toes eagle perched on an electricity pylon. 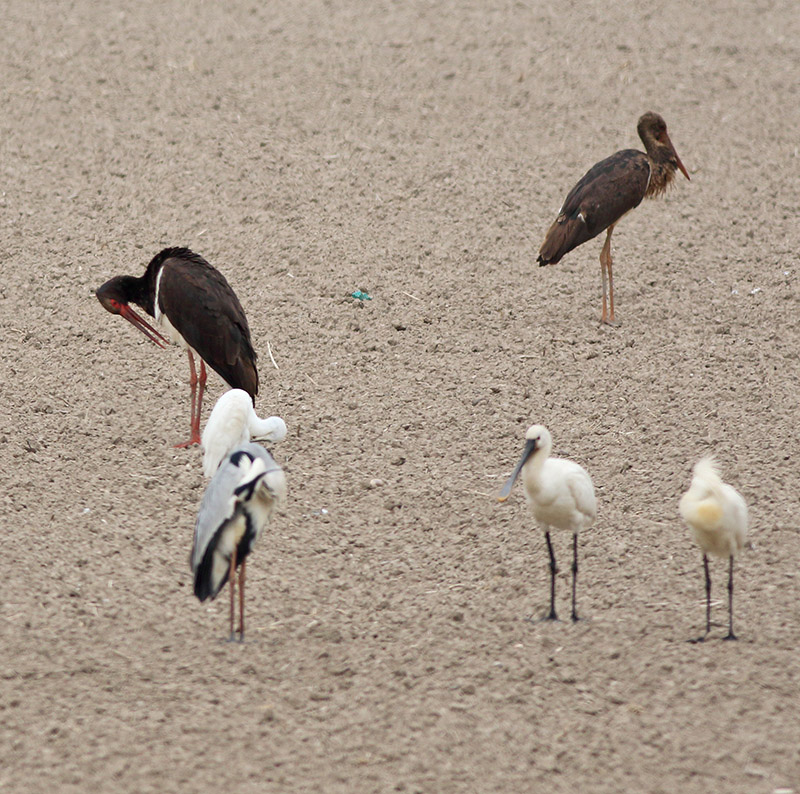 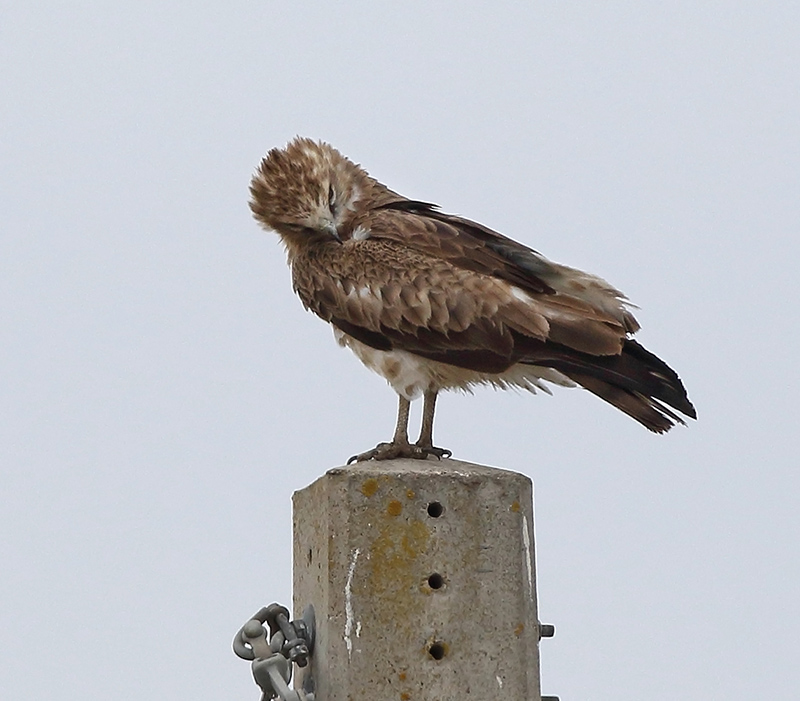 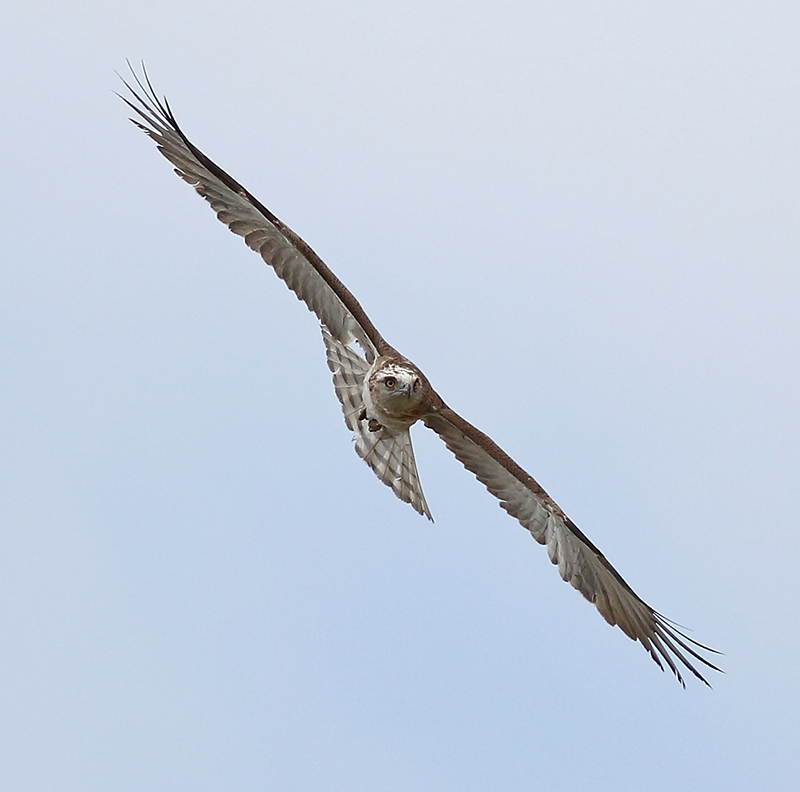 Eventually we reached the centre but it was a huge disappointment. The trees/bushes nearest the centre were devoid of life and the few herons we saw we in some distant trees ~ 150 yards away. The pools beside the centre only contained coots. There were a few flamingos and a lot of stilts on a pool near the east end of the centre but that bit is a museum/display area and has no windows/viewing area. We had a coffee and departed very disappointed.
Our disappointment was not finished however as we drove to a road  (that also said "private") that was alongside the main reed bed and where previously we had been able to get close to squacco and night heron. They have now installed a wire mesh fence alongside the road so that photography was near impossible. That was it. We gave up and took the "private" road back. The only bird we stopped for was the local variety of yellow wagtail. 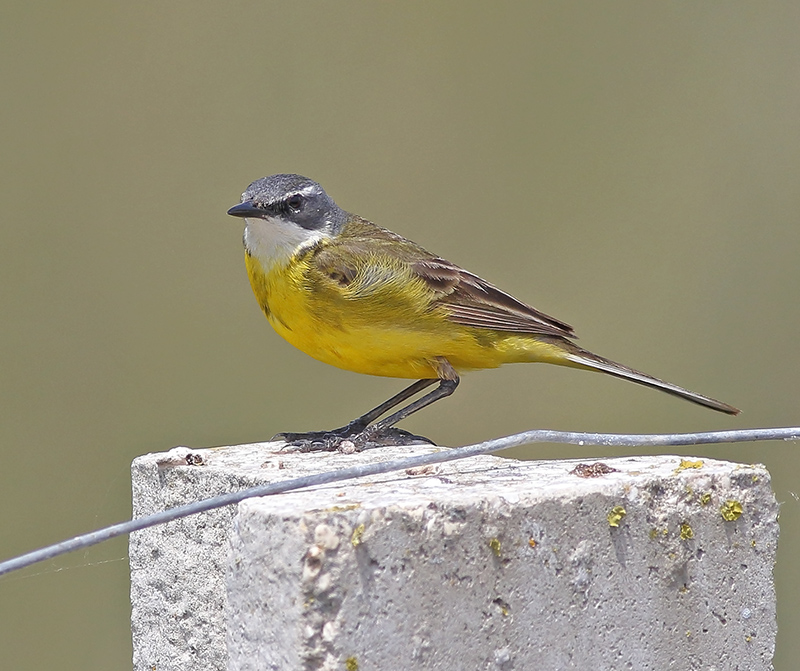 Thankfully the "private" road was completely pot hole free and we got home in a fraction of the time it took to get there.
The rest of the afternoon was spent in El Rocio watching the world go by with a beer in the hand.

I've saved discussing birding in El Rocio itself till the end because this was a very pleasant surprise. The first 2 mornings I spent generally wandering around and I'd seen a decent list of birds - flamingo, cattle and little egret, grey, night and squacco heron, glossy ibis, reed and great reed warbler, black winged stilt plus booted eagle, black winged kite, bee-eater and hoopoe - but photo-opportunities had been limited. 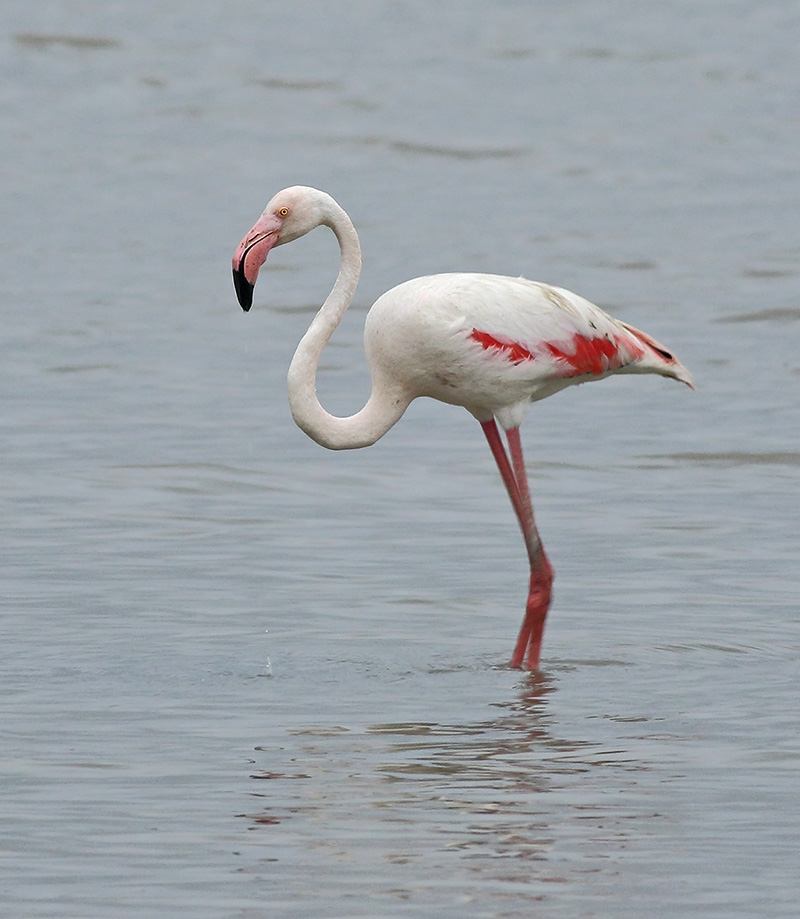 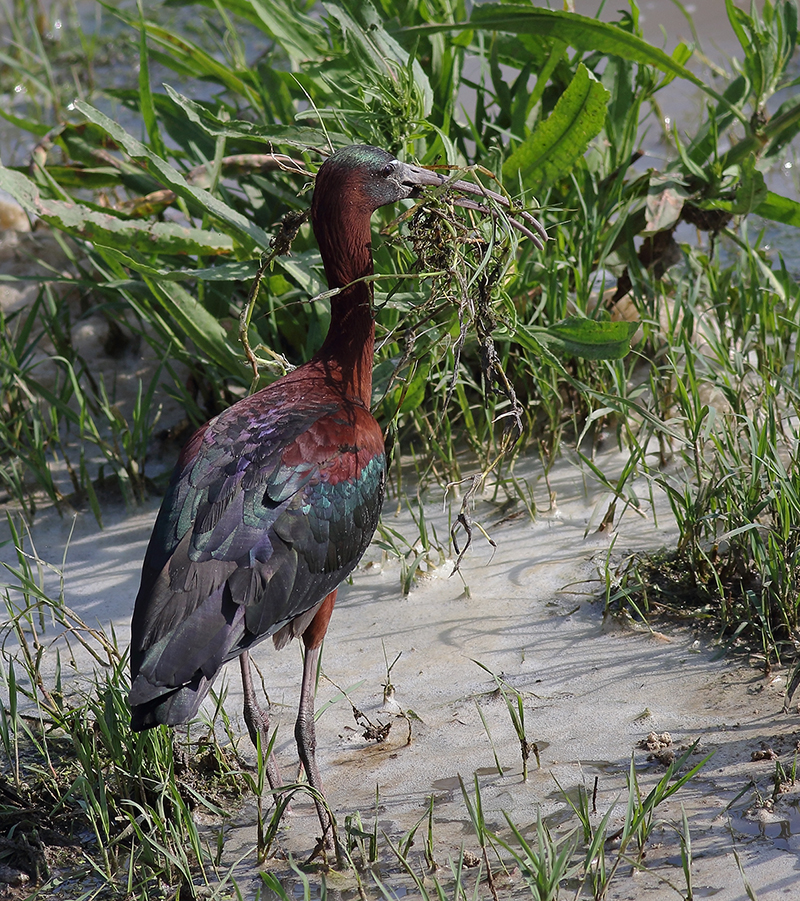 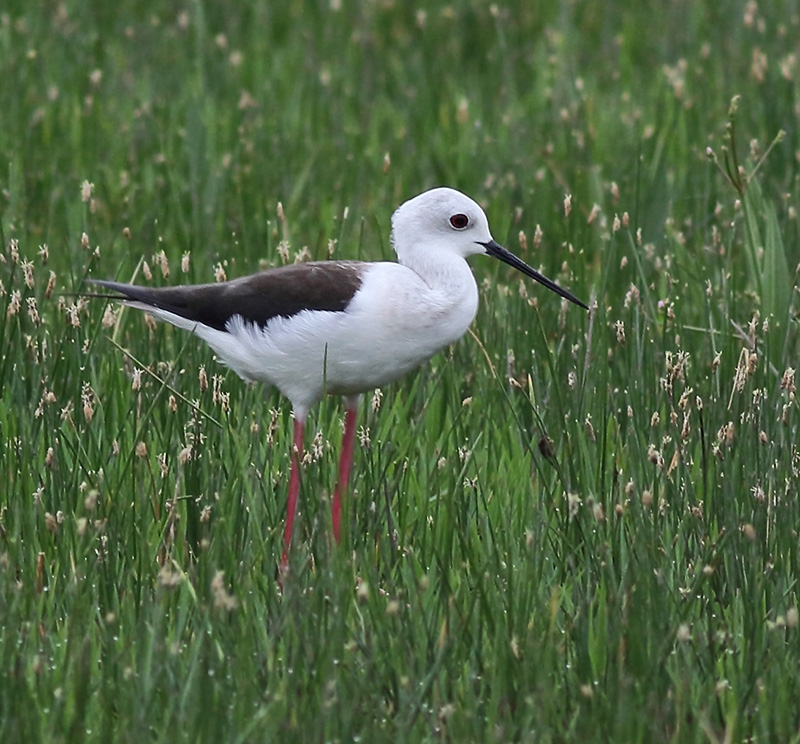 However at the end of my second pre-breakfast session a little bittern flew up from the town reedbed; this was a most unexpected find. The last 2 mornings were spent watching the reedbed in the hope of more and better views

El Rocio looks south over the marsh with a promenade (the only paved part of the town) running alongside a reed bed that is up to 50 yards deep. There is an open area of water half way along that comes close in to the prom so I waited there and watched. If you stand around and wait it was amazing just how many night  and squacco herons hide in the reed bed and fly out over the hour or two after dawn to the roost. I also had 2 spoonbills fishing really close. The glossy ibis are constantly  flying past and dropping into the reed beds and purple swamp hens can be seen (obscured by reeds) at close distance. 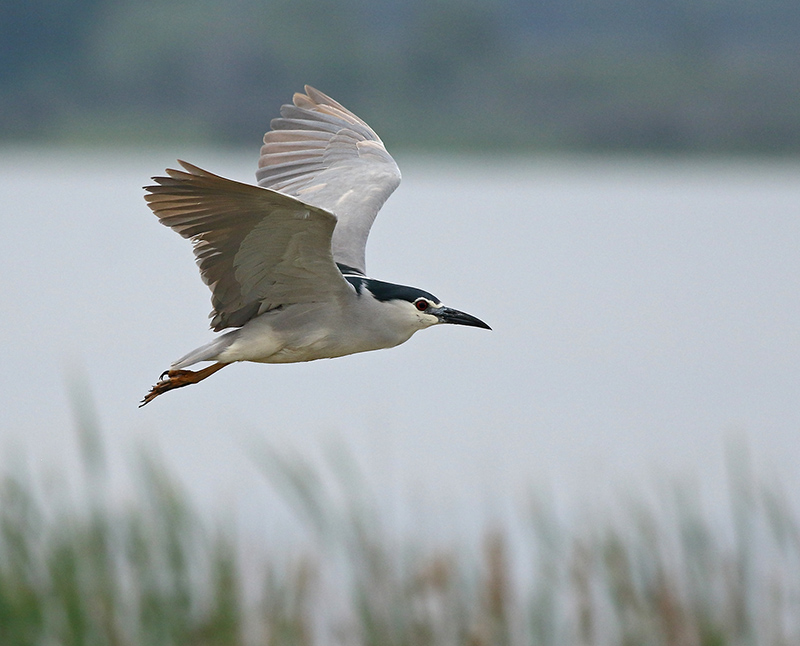 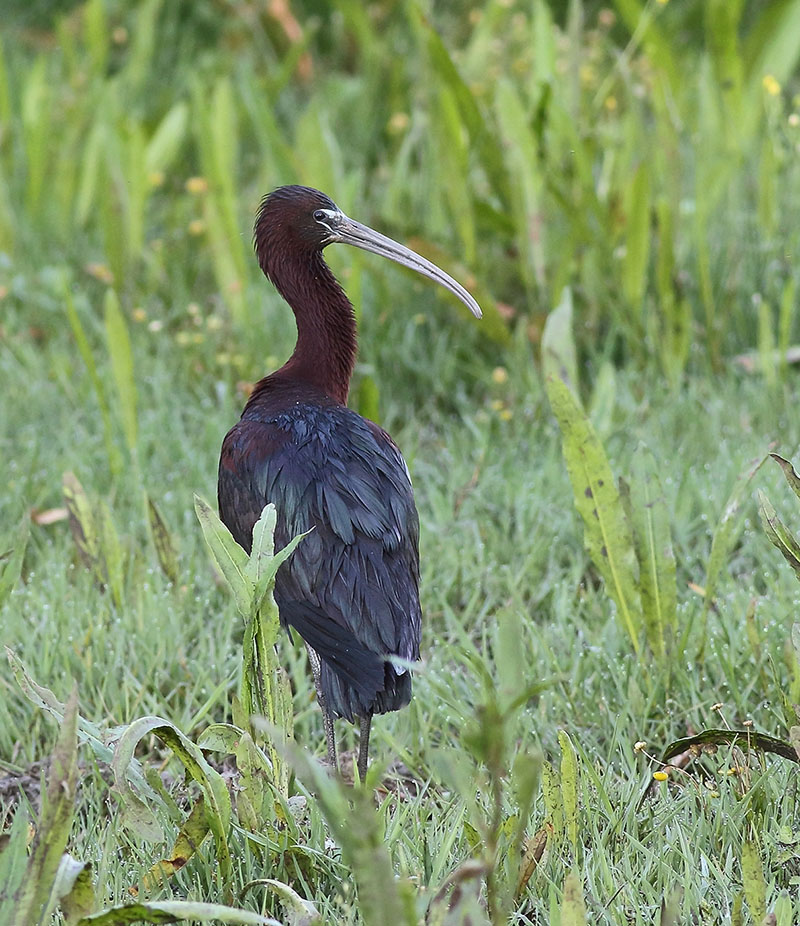 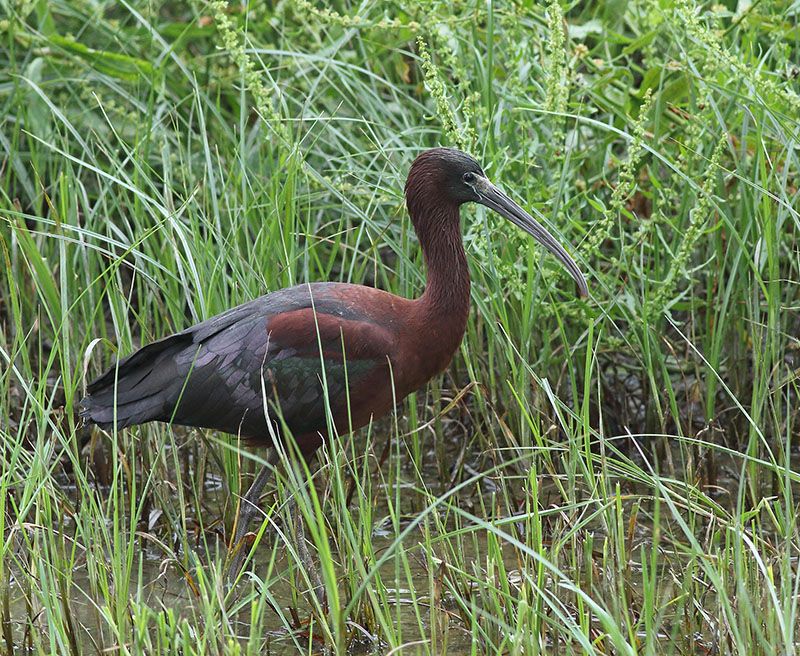 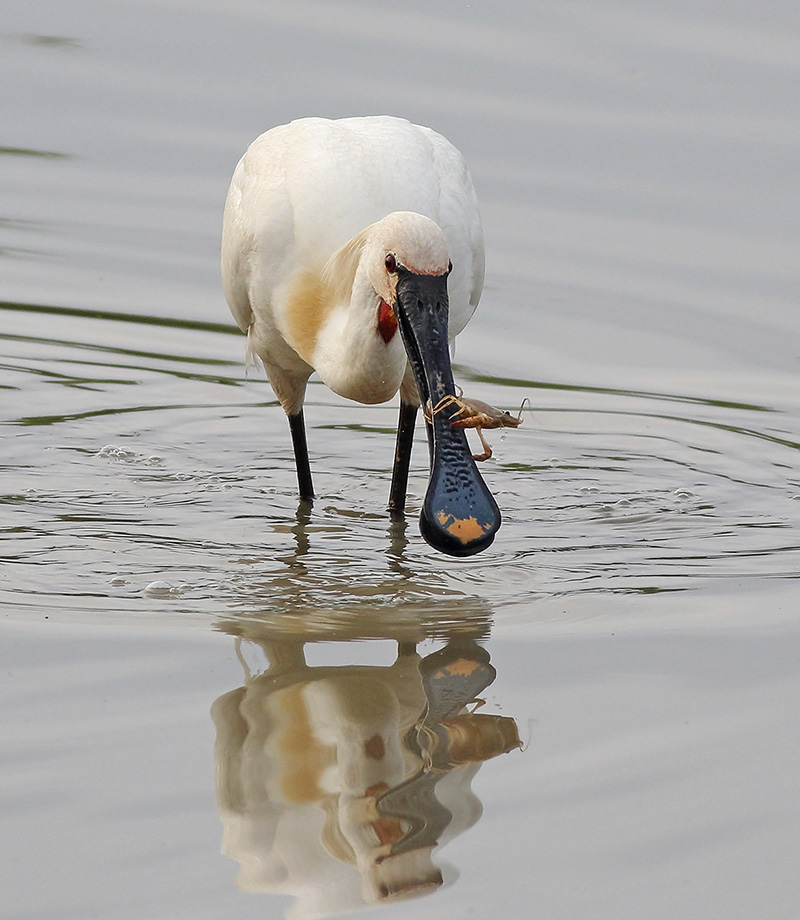 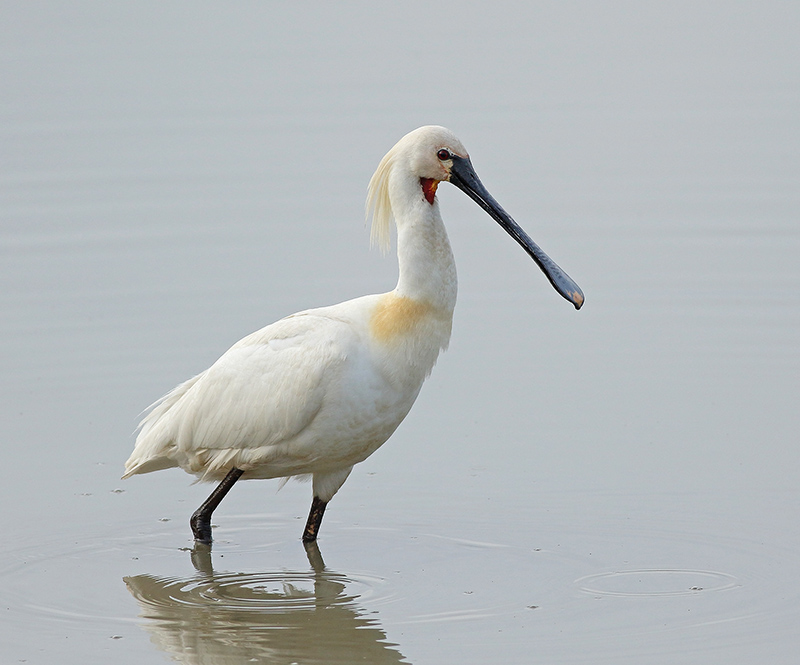 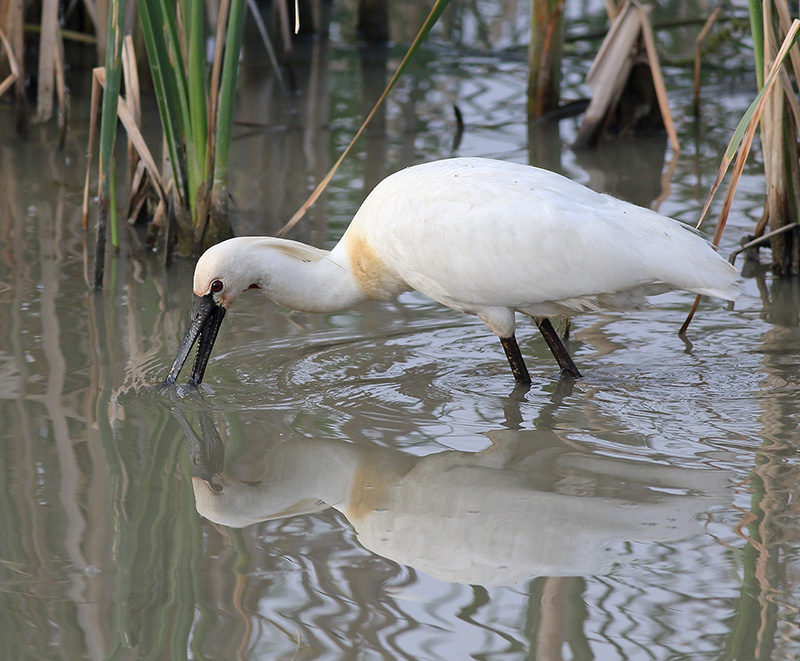 Best of all however are the little bitterns. I think there must have been 3 or 4 pairs resident so I had half a dozen sightings each session. Most of the time they appear without warning out from the reeds and fly low 20-30 yards and drop back into the reeds so getting a shot is a challenge and being early morning didn't help as the light was poor (most of the time). 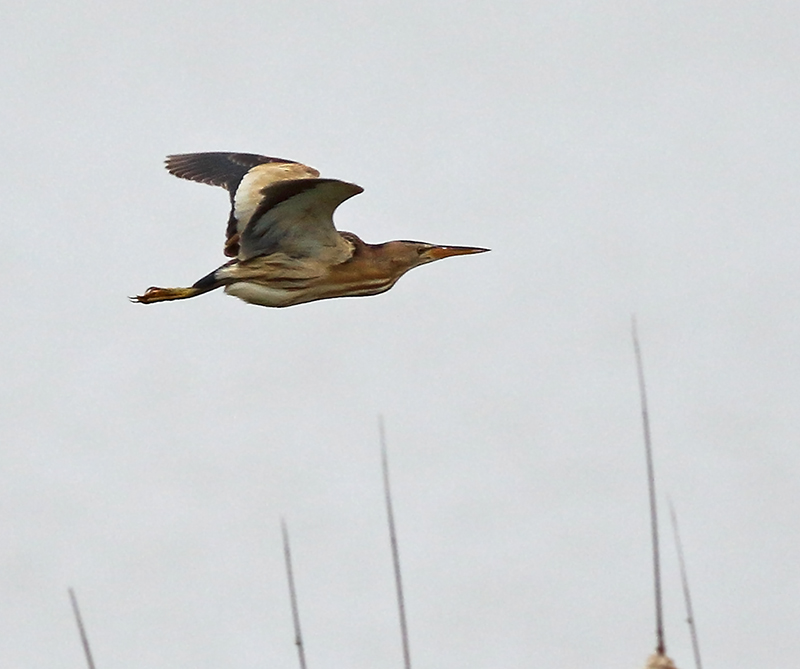 On one occasion one landed in the reeds about 20 yards away and I got a shot or two off before it climbed down the reeds and out of sight and on another occasion I saw one (through the reeds) climbing up the reeds before taking off. 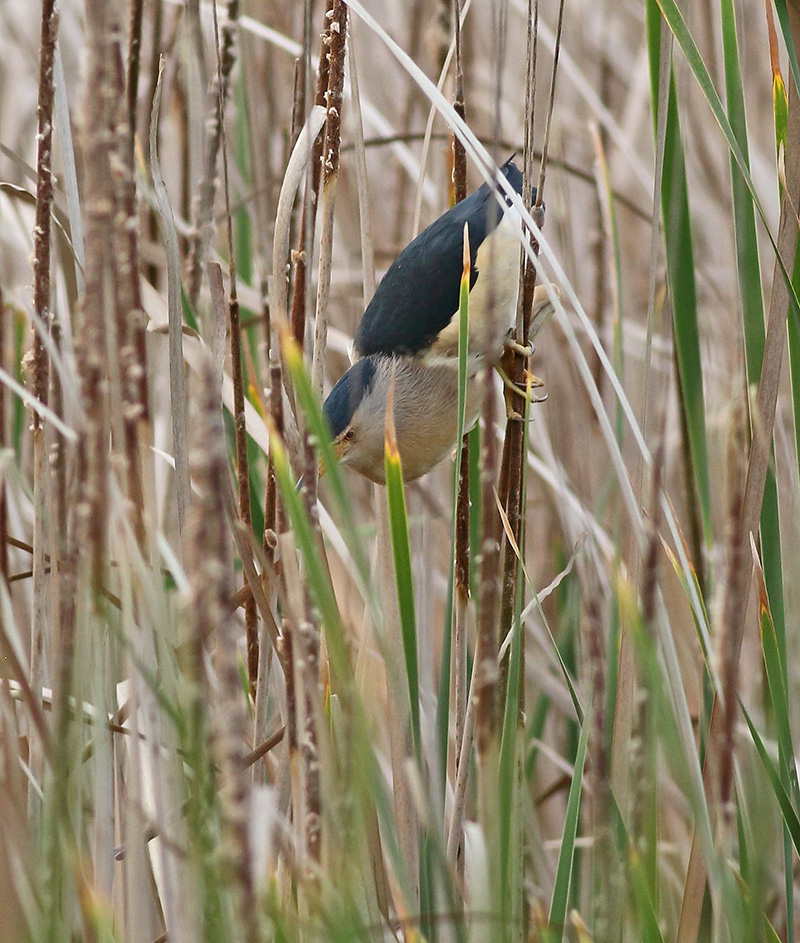 I just wish I'd found out about the little bitterns on day 1.