Dover Harbour is not the most picturesque birding destination but during the winter it occasionally turns up a few attractions; more importantly (for me anyway) these often present at quite close quarters.
A couple of weeks ago a small gull flew past and though I thought "little gull" at the time I didn't see it again so I dismissed it as wishful thinking and assumed I had just had fleeting views of a juvenile kittiwake.
Well on Sunday it was there again and sure enough it was a little gull......it also helped that Chidders had been watching it!.
Little gulls are not  birds I see very often (most likely due to the fact I don't do sea watching) but to have one within camera range meant that the stage was set for several days of little gull therapy. If only the weather had cooperated.
Sunday was actually ok in that whilst it threatened rain at times there were also periods when the sun shone brightly and the sky was blue. Monday, the cloud was thinner but the sun was rarely seen and Tuesday the forecast was excellent but the weather hadn't read the newspapers or seen the News because after 15 minutes the fog rolled in. Still there's always tomorrow.
The little gull performed best on Sunday where it was ranging along the PoW pier for long periods, Monday it showed pretty well but went AWOL for long periods but yesterday we only saw it a couple of times...... and it never came close.

On two of the three days we have thrown out bait to try and tempt the little gull into feeding below us picking at the water surface but to date it hasn't cooperated. Baits tried so far are floating fish food pellets and bread (white and brown!) so any suggestions of something easy to get hold of, floats and is not too stinky would be appreciated. 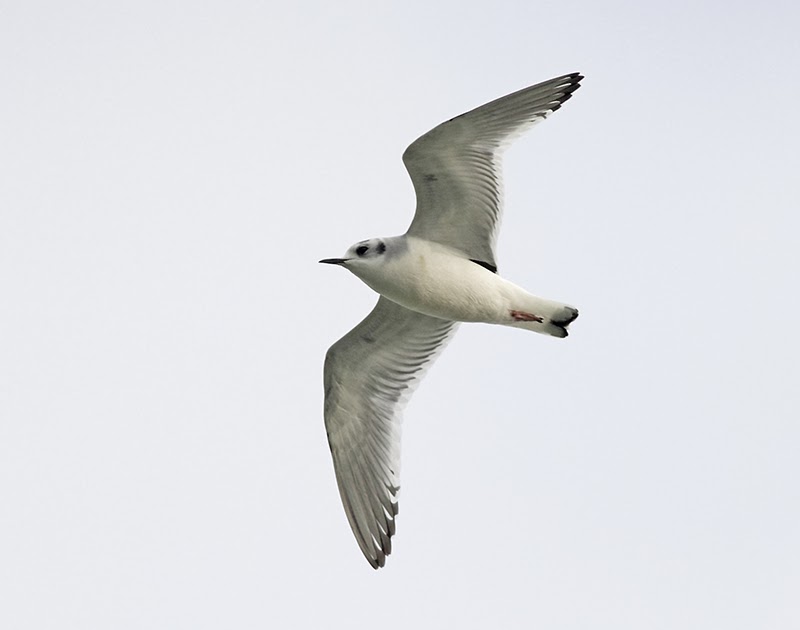 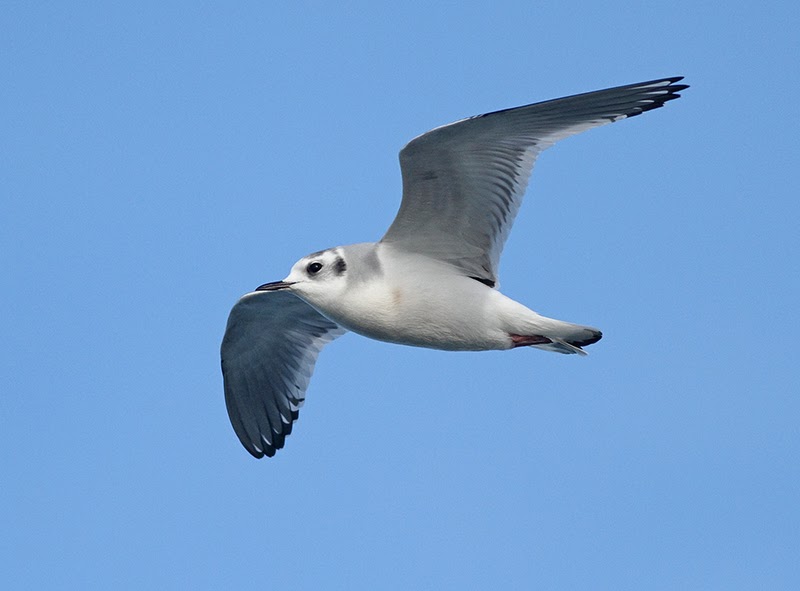 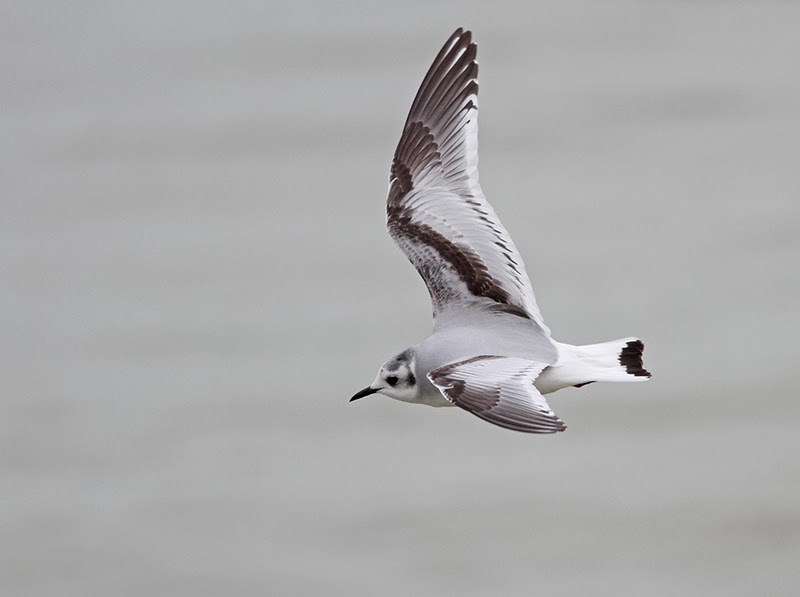 At times the bird came really close and even hung in the air 20 feet above my head but these overhead shots are never very pleasing. 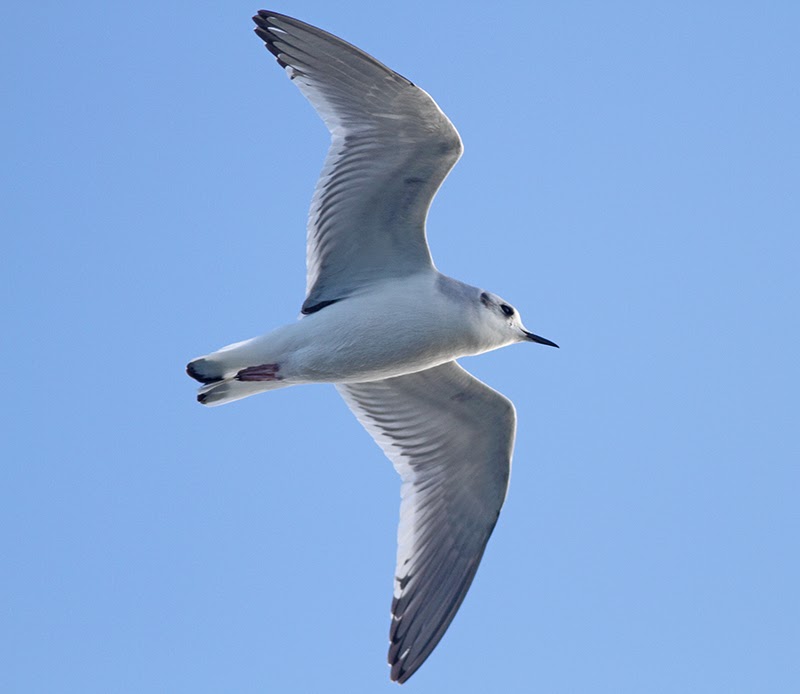 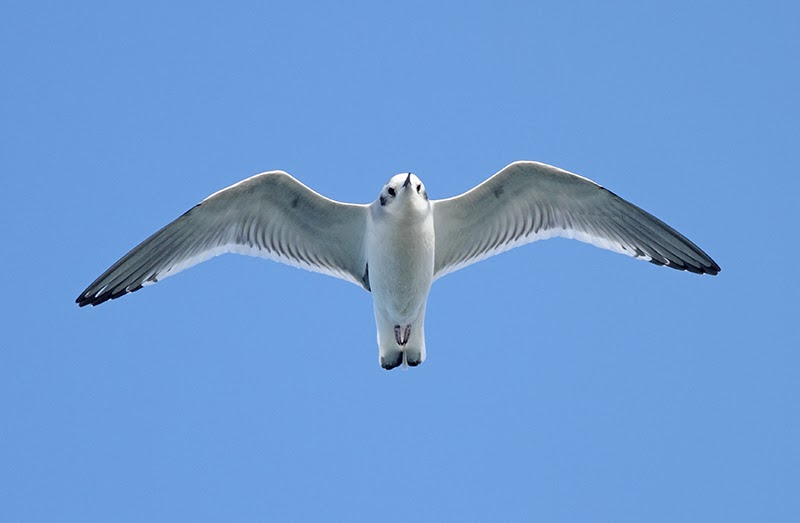 One of the  close fly-pasts allowed decent views of the black under-wing patch  (I have no idea if these feathers have a technical name): 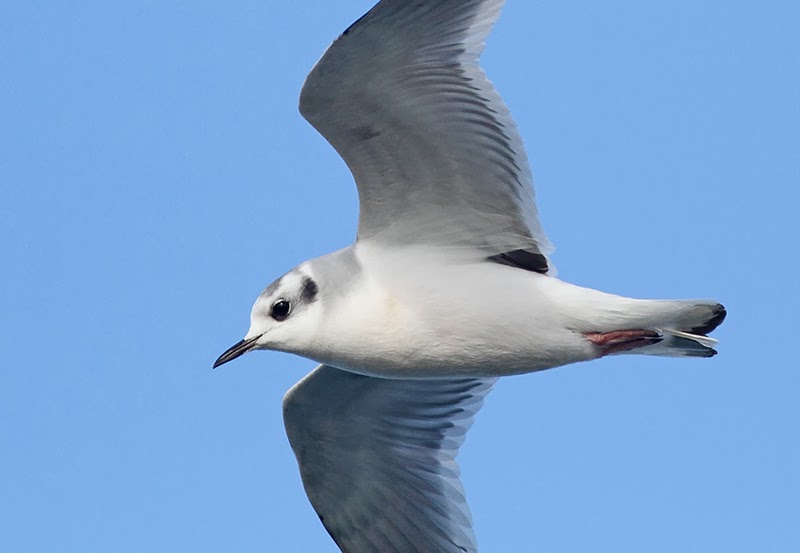 Kittiwake numbers are increasing at last with various stages of adult moult on show plus some juveniles.


Here are several shots of an adult where the primaries haven't completely grown. This makes the bird look really unusual in that due to the lack of primaries the wings appear very short and the wing has 3 black patches rather than the single black tip. 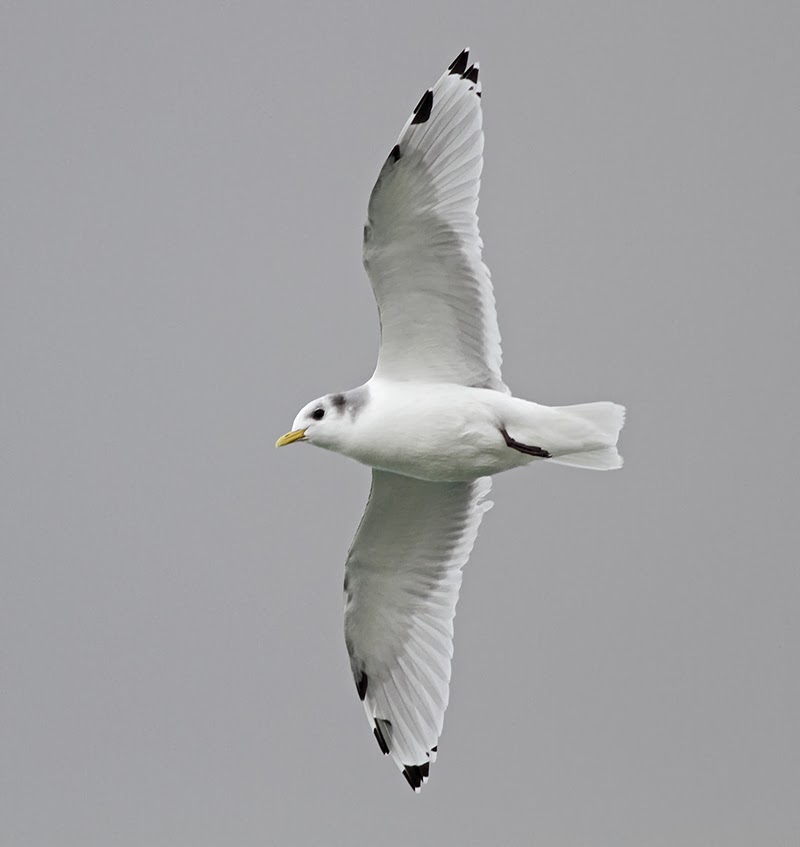 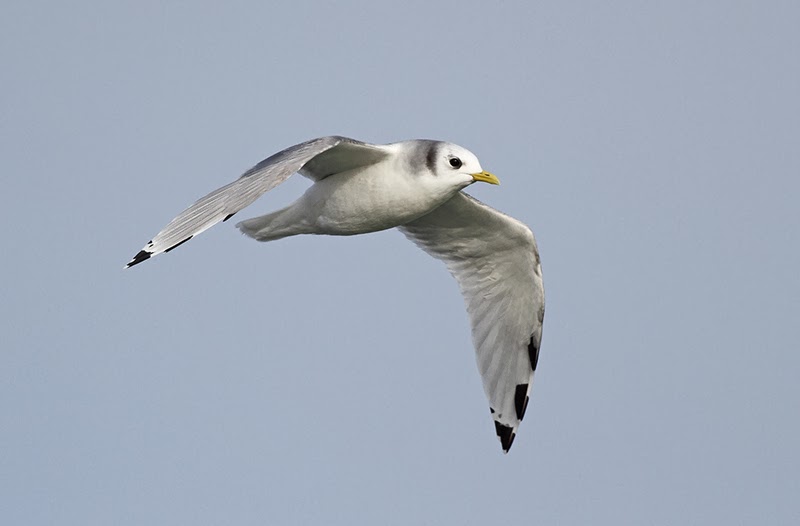 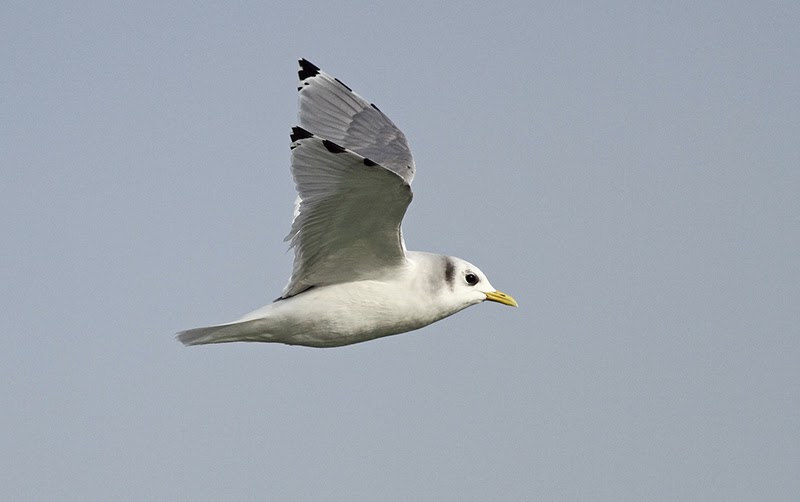 There are also several juveniles around: 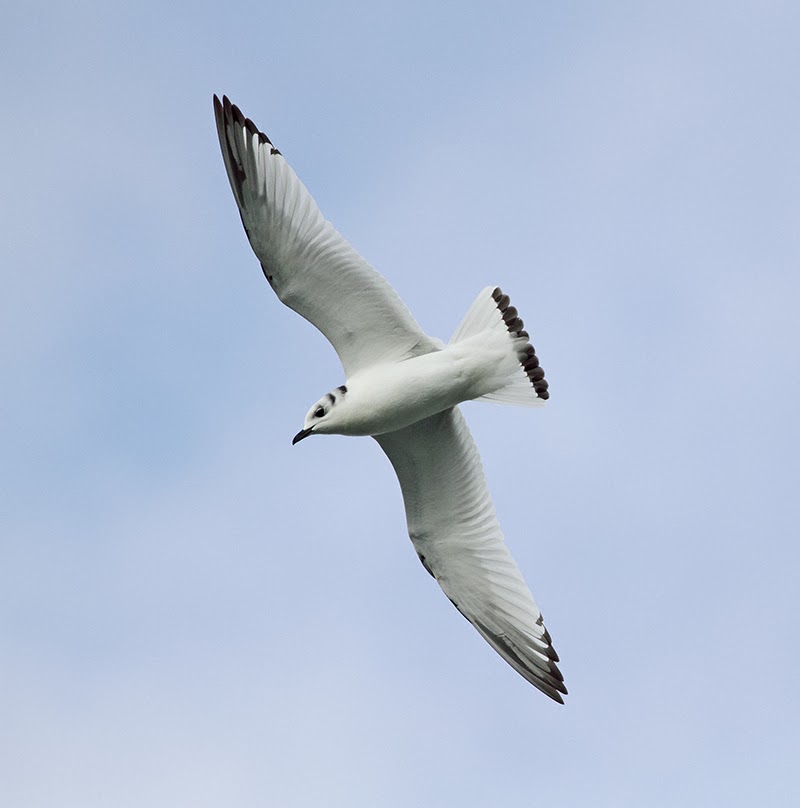 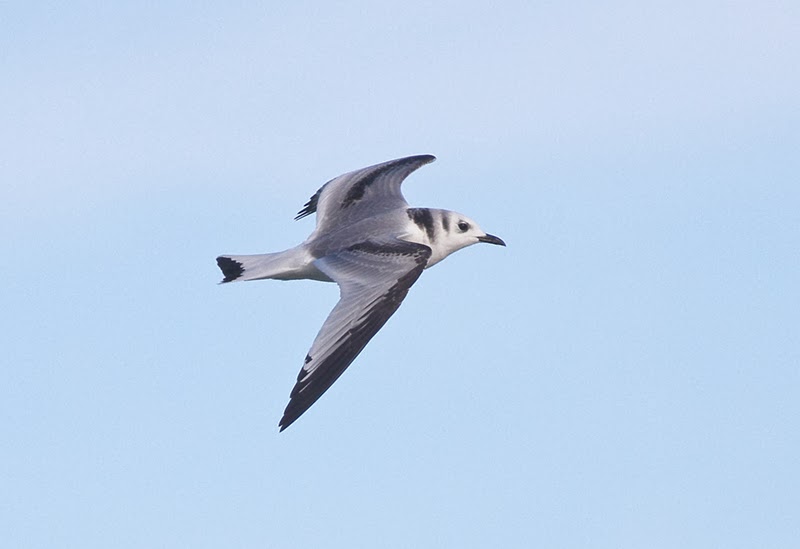 The final birds of interest were the med gulls. There had been a 1st winter on every visit but on Tuesday there were also a couple of adults on show.


The 1st winter med gull was the only bird to respond to bread yesterday coming down just in front of us and showing off the wing pattern brilliantly in the 5 minutes of sun we enjoyed. 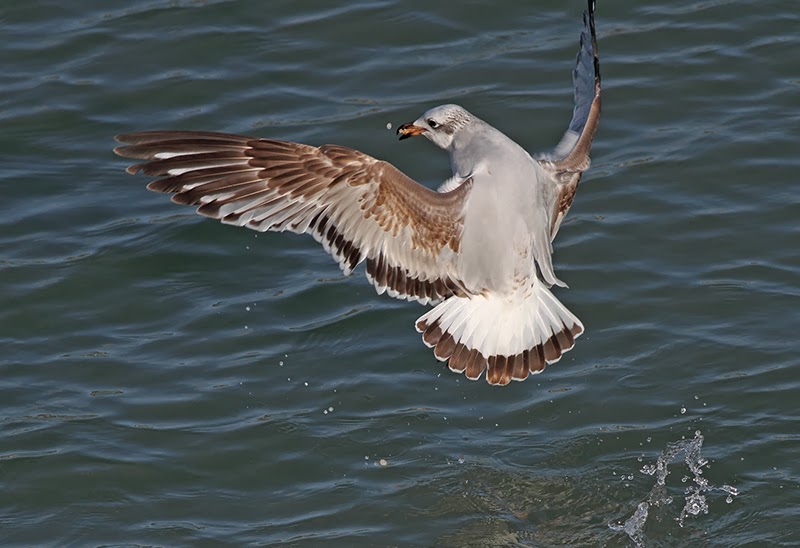 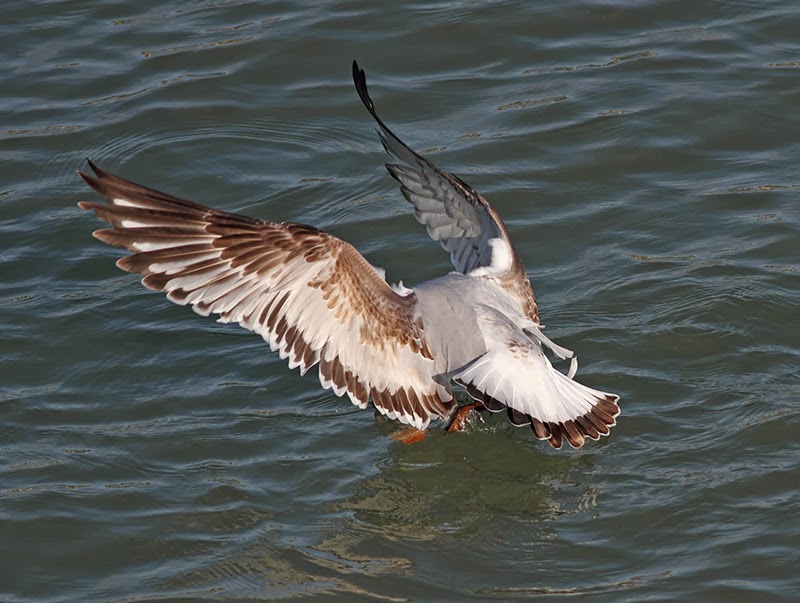 Also around in the harbour are a few guillemots and razorbills with some of the guillies being in summer plumage. Grebes and divers however are conspicuous by their absence.

Posted by Greater Kent Birder at 16:45