My last few weeks birding has mainly been spent along the cliff top between Kingsdown and Dover and due to the paucity of birds in East Kent at the moment the main objective of most of these walks was exercise. On the avian front what you see up there is pretty predictable, gulls (herring, black backed and lesser black backed), fulmars, loads of jackdaws, crows and a few mippits, linnets, yellow hammers and corn buntings, very few of whom are kind enough to pose for the camera.

In some of the few bits of scrub up there you might find the odd whitethroat (e.g Fan Bay) but that's about it. Stonechats are conspicuous by their absence all the way from Kingsdown to Dover.

The major attraction (and photo-opportunity)  has been the peregrines who have enjoyed an excellent breeding year fledging 3 youngsters some of which seem to positively love being papped. 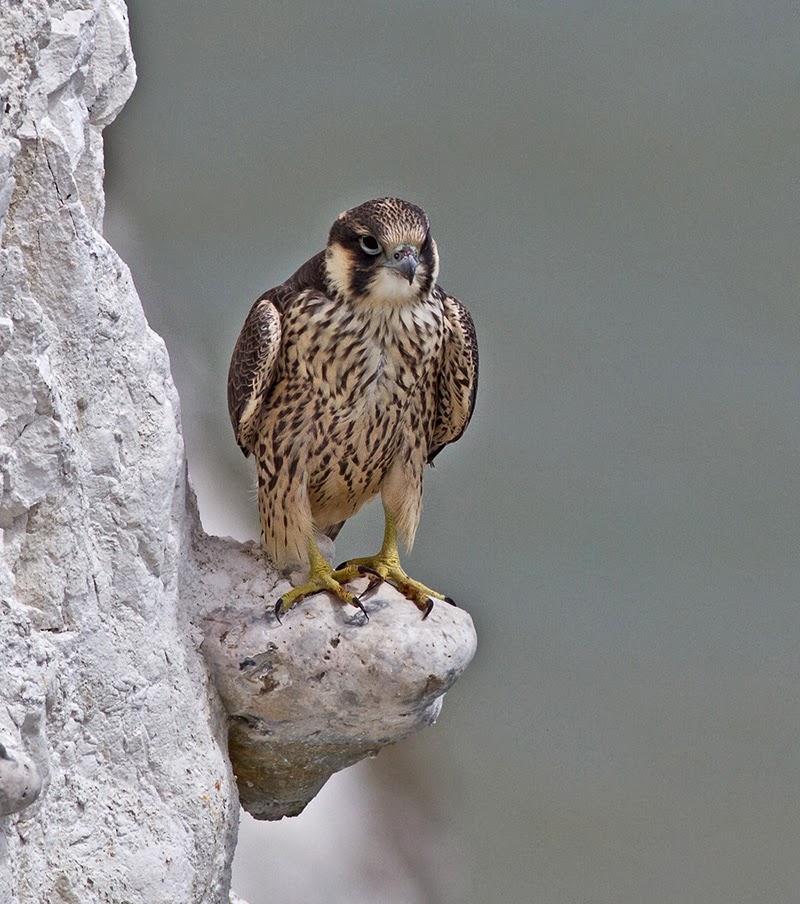 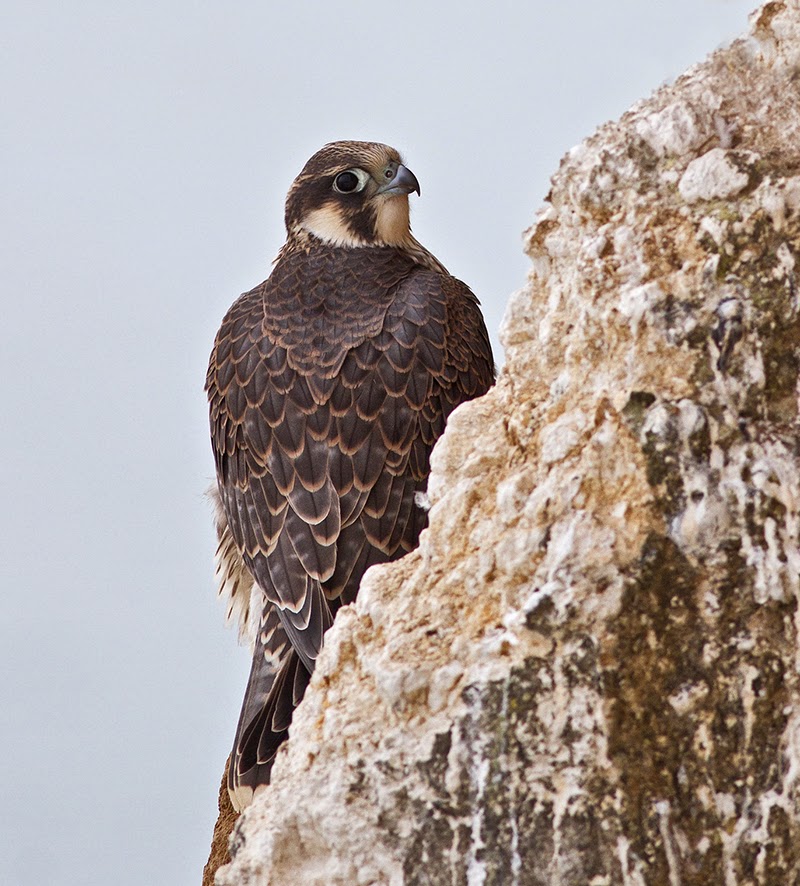 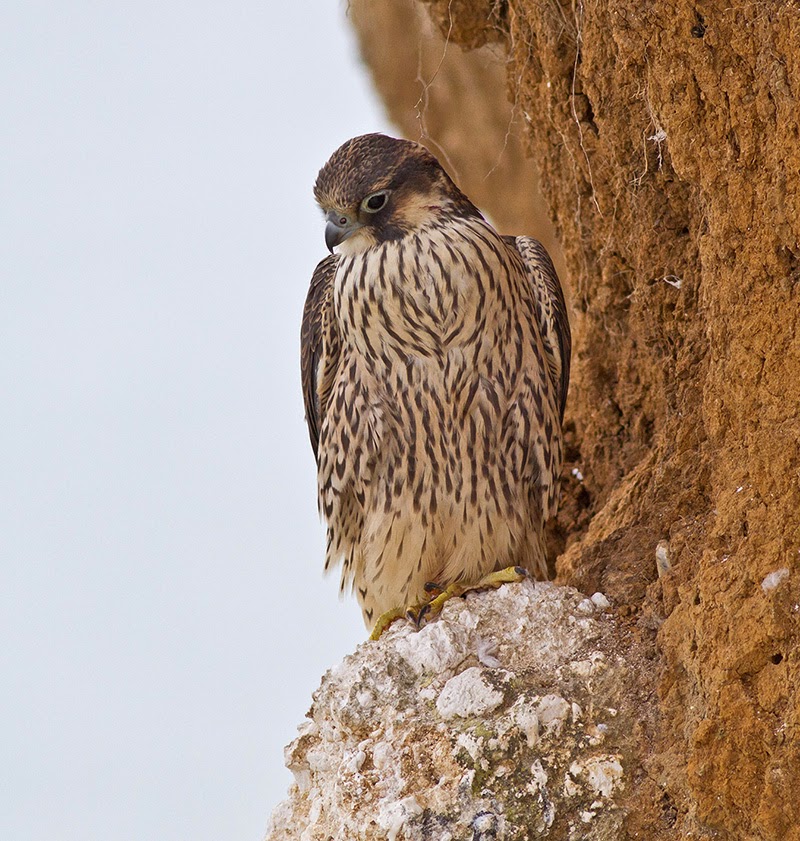 As with all photography on the cliffs the light is never ideal with you either shooting into the sun or if you wait till the afternoon for the sun to be behind you the birds are in the shade with the bright sea behind them.
Locating the youngsters is not that difficult - they come to you - you just stand near one the perches and wait; they fly in whilst you are there and proceed as if you don't exist. The other means of locating them is their call - if they are around and awake they seem to call constantly, either quietly or insistently if they are hungry.
They don't do a lot of flying which probably helps the perch photography but it makes getting aerial shots difficult - they just sit, calling (or sleeping) and if an adult turns up with a kill they fly off for a feed. From the normal vantage point I could see several well used feeding stations but all were distant. 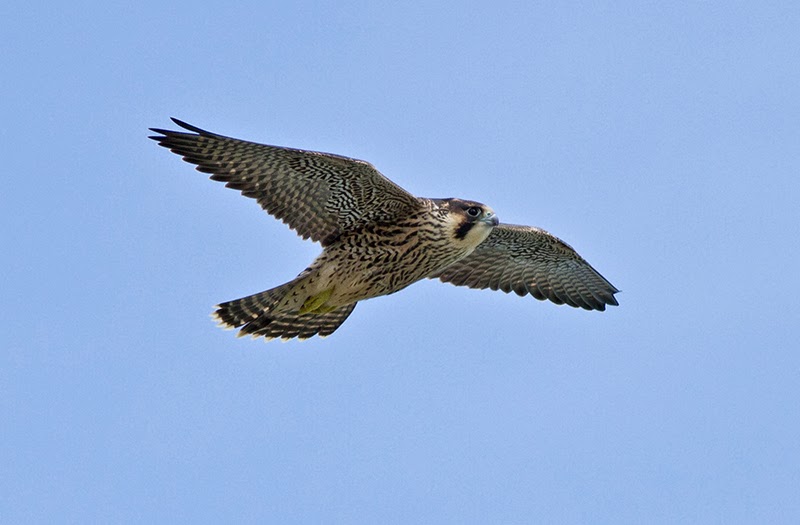 The adults were far less easy to pap; the few perches they used were normally distant though I did find one on the main photographic perch one morning and it stuck around for several minutes. 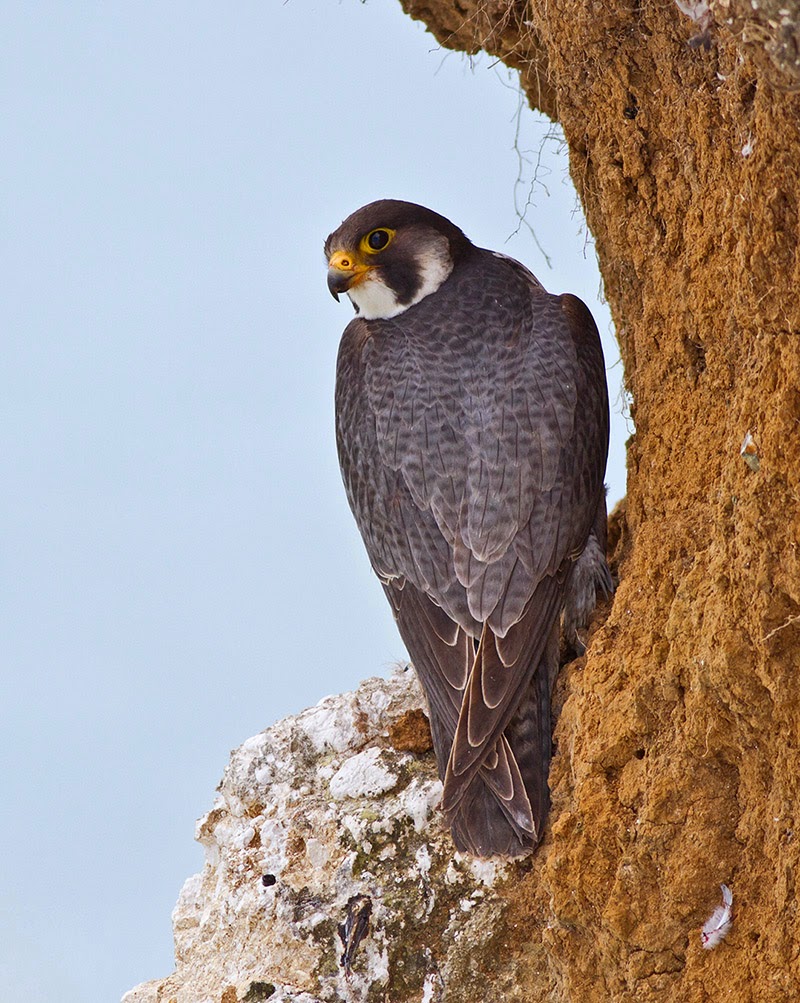 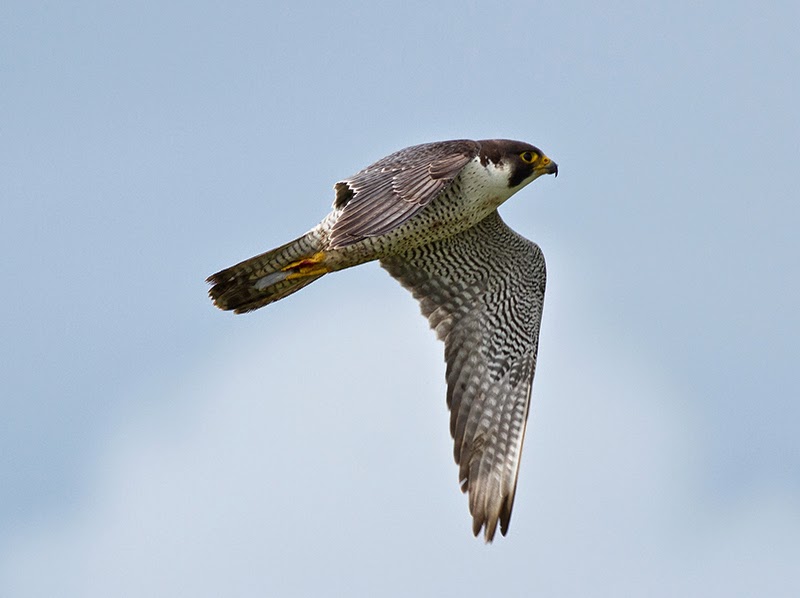 The rest of the time I assume the adults were away hunting and you only saw them as they returned low down flapping frantically as they carried another ex pigeon to one of the feeding stations.

A couple of shots showing just how relaxed the youngsters were: 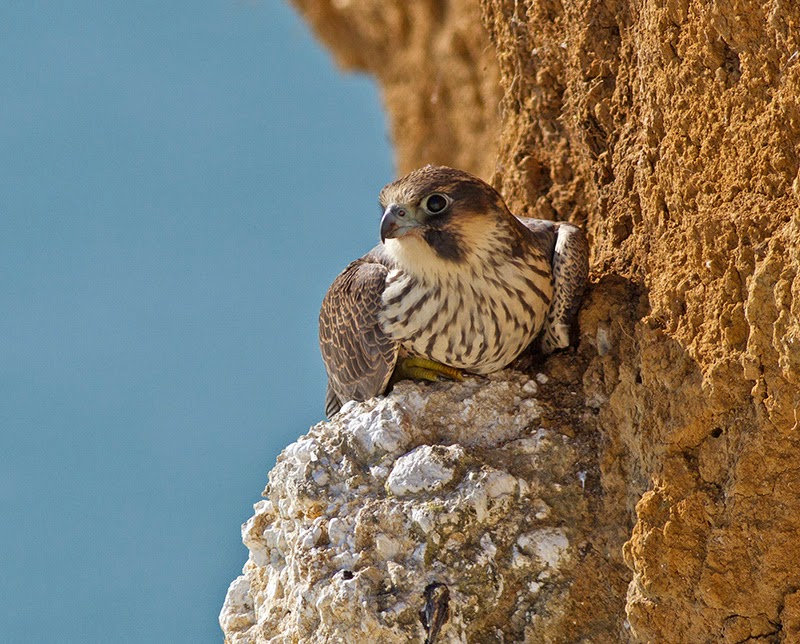 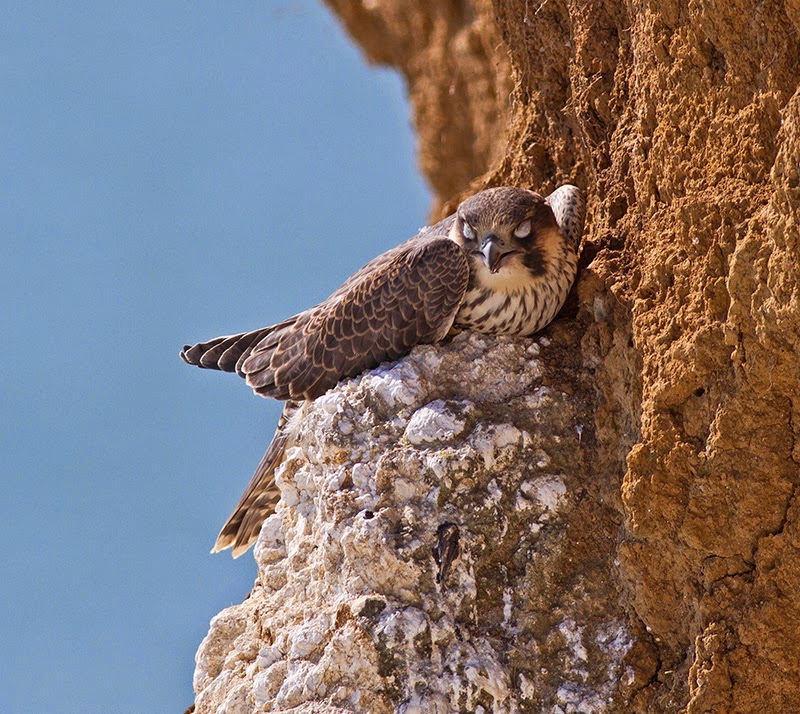 ....and on one occasion, first one flew in then 10 minutes later an second joined it (though I couldn't get both in focus). 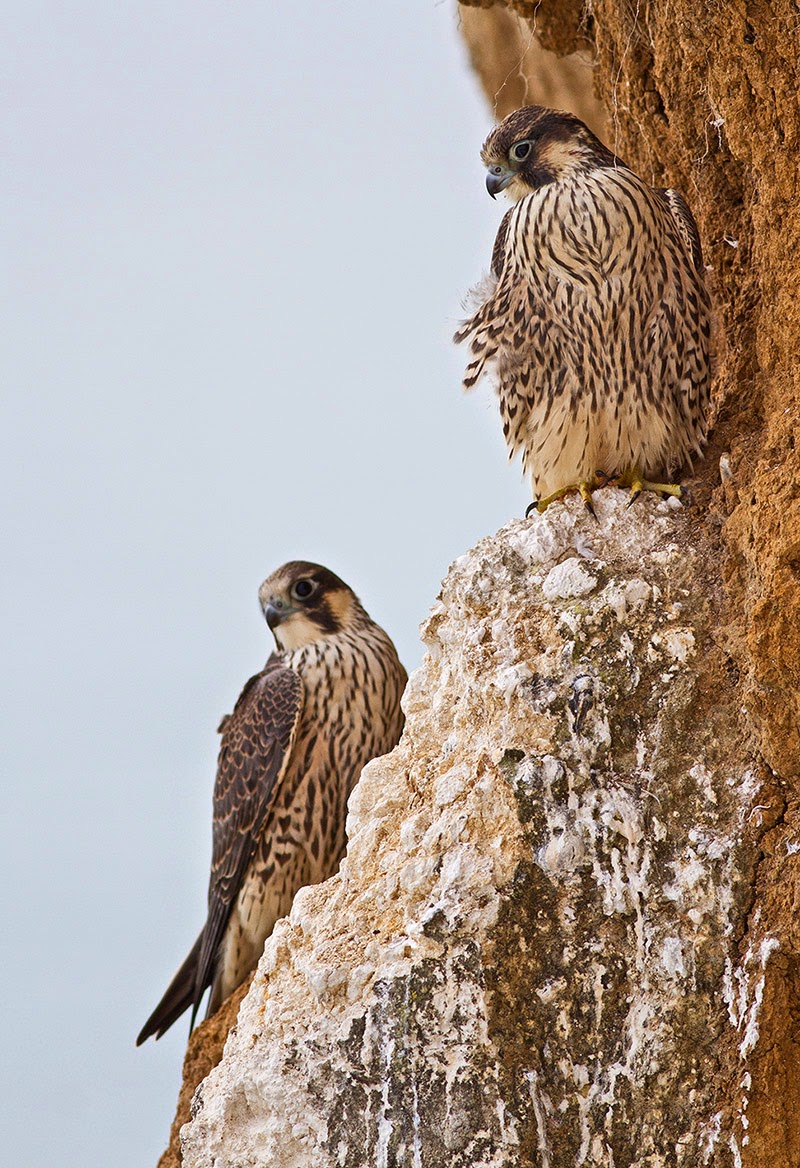 Posted by Greater Kent Birder at 11:05