When I woke up this morning I had no idea where to go. Other than the long staying shrike at Chilham and the plastic night heron at Hythe the only place with birds in Kent seems to be Dungeness. I did consider the woods but the forecast for the Canterbury area was pretty poor - heavy cloud - not the best conditions for woodland photography. Then I checked the Dungeness area - not exactly sunshine but the forecast was for lighter cloud and a few bright intervals. Decision made. Dungeness it was.
On arrival I decided to give the ARC a miss and go straight to the RSPB. A quick look from the Firth hide allowed me to get a good look at some coots but nothing else but I could see the main duck flock had moved into the middle of the lake - things were not looking good. However as I approached the Makepeace hide I could see a great white egret very close to the Scott hide so I went straight there.
On entering the hide, no sign of the egret but a red head smew was swimming straight towards me. Fortunately it dived which allowed me to open a window then up it popped - several clicks later I had some pretty decent shots which left me thinking it was already a worthwhile visit. 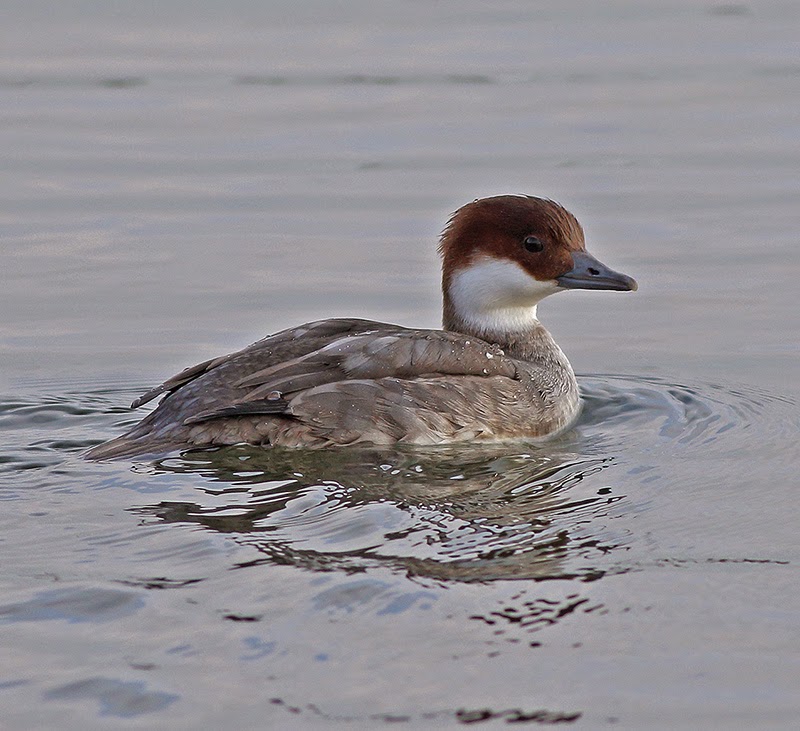 A quick scan around revealed several other red heads and a very distant male. I settled down hopeful.
Not long after the drake swam across the front of the hide at about 35-40 yards - I clicked away happily then on reaching the bank it turned and swam towards me. Unbelievable. 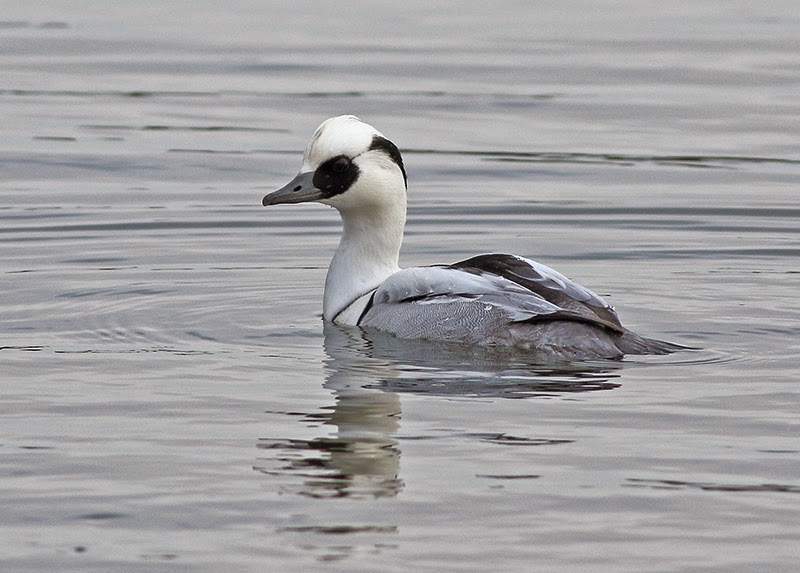 Just to the left of the Scott hide there is a small reedy inlet and it went in there to fish; quickly catching a perch. The only downside was the reeds prevented an un-interupted view of the proceedings. 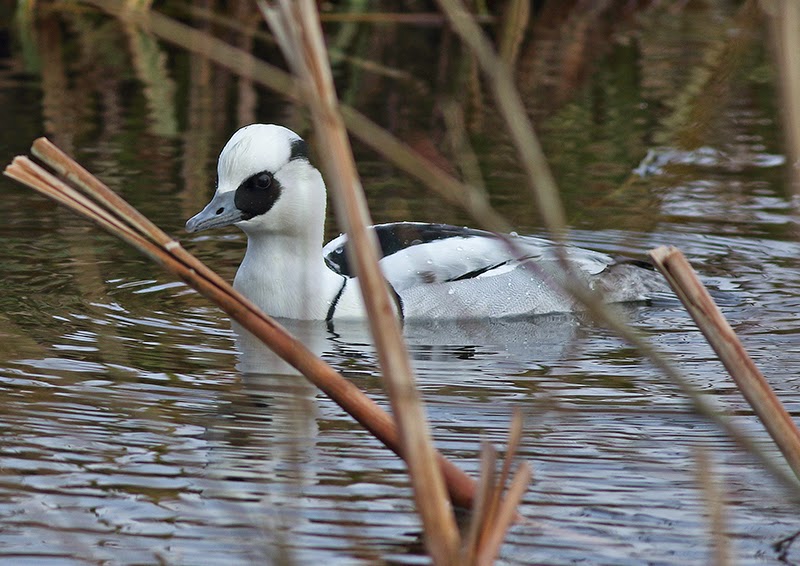 It repeated this pattern another 3 or 4 times in the next 2 hrs or so; sometimes swallowing the fish whilst in the reeds and sometimes carrying it out to open water and consuming it there. The only downside to this superb display was that it always exited the reeds underwater surfacing ~20 yards away rather than swimming out on the surface. 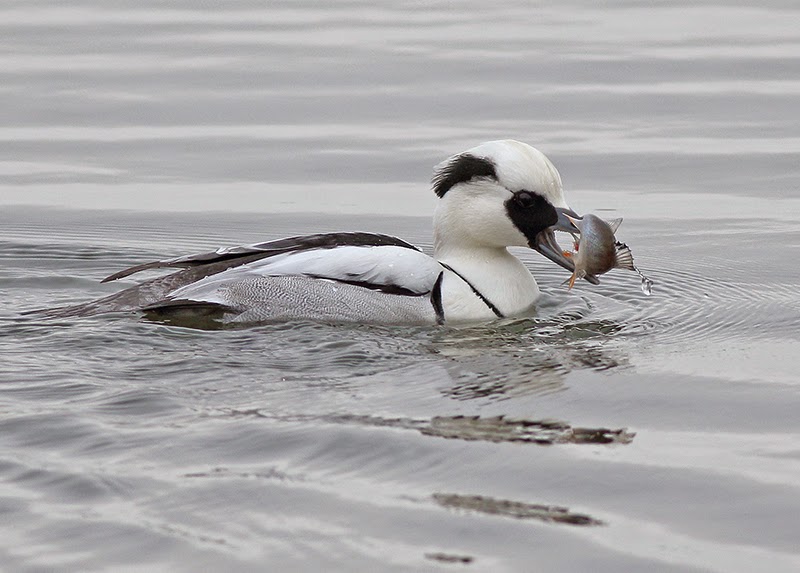 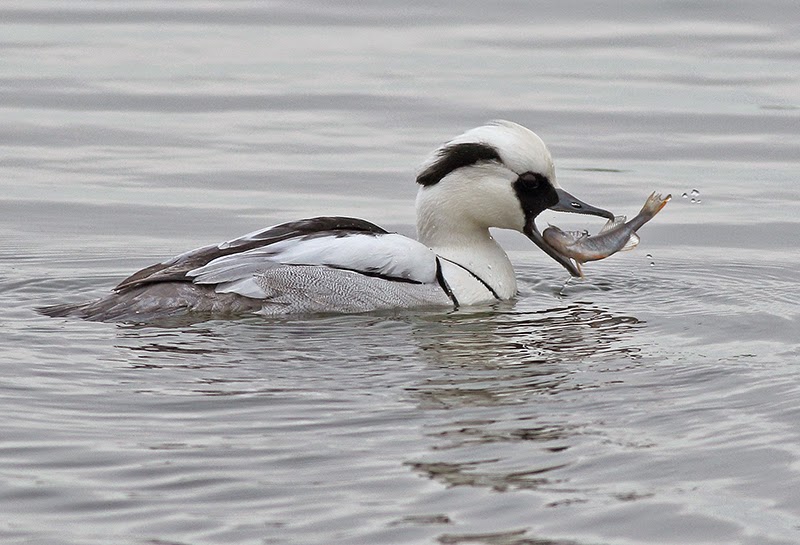 A red head visited the pool on a couple of occasions but I couldn't get on the bird when it was in the reeds. but on one occasion it did carry the fish out to open water: 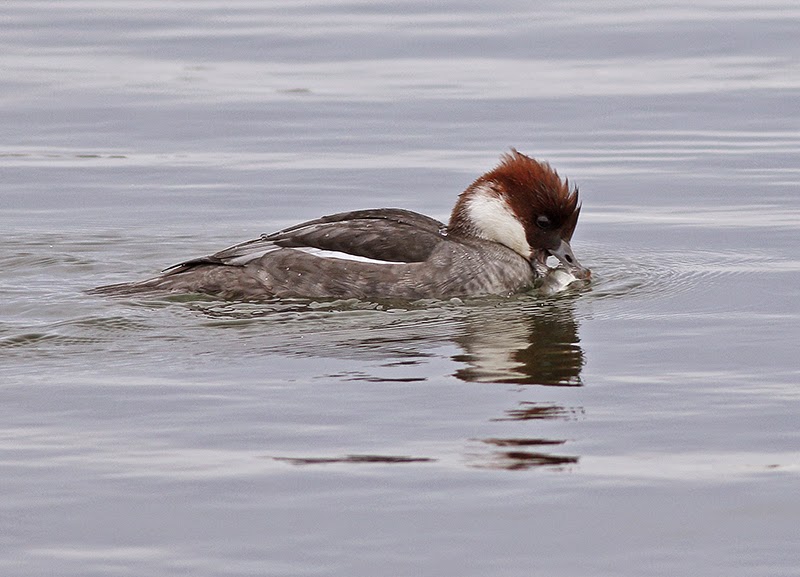 Here's a few more shots of smew just milling around in front of the hide - normally post eating. 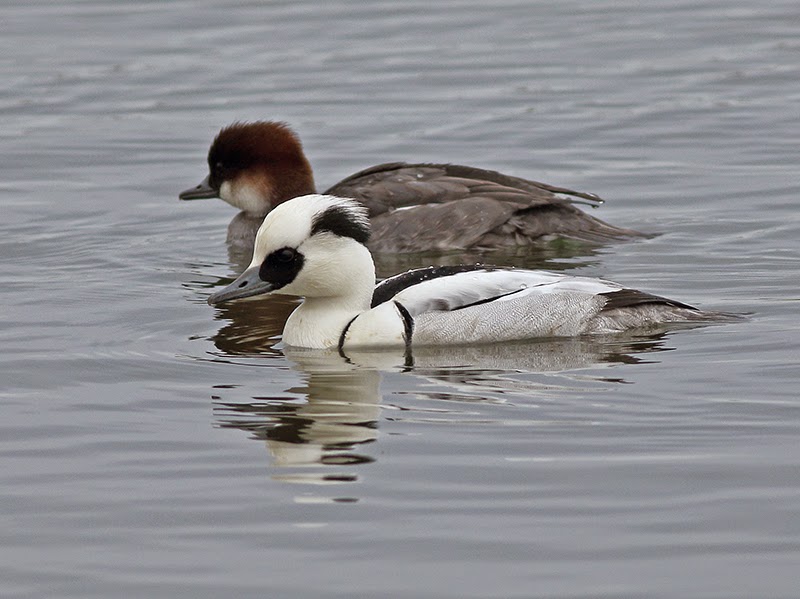 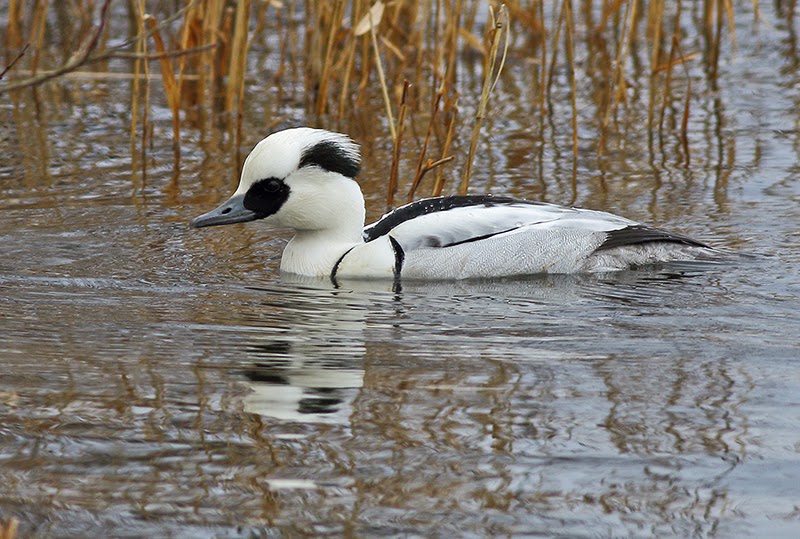 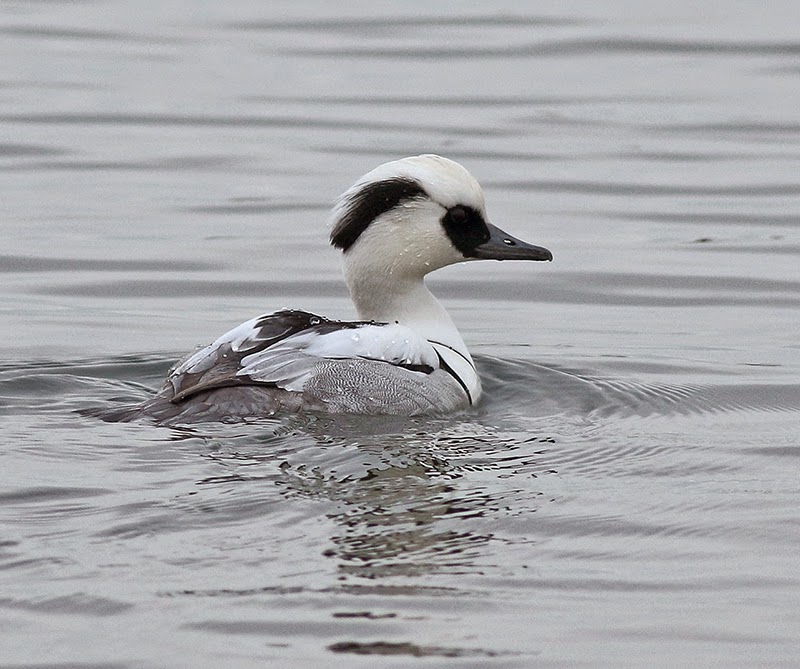 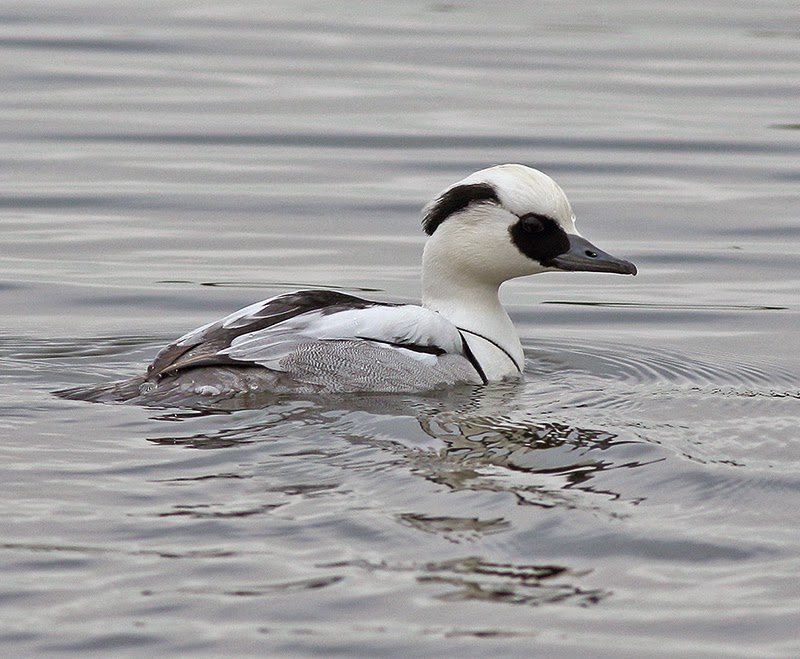 There wasn't much else to point the camera at though a cormorant came very close as did a great white egret which was then chased away by a grey heron. 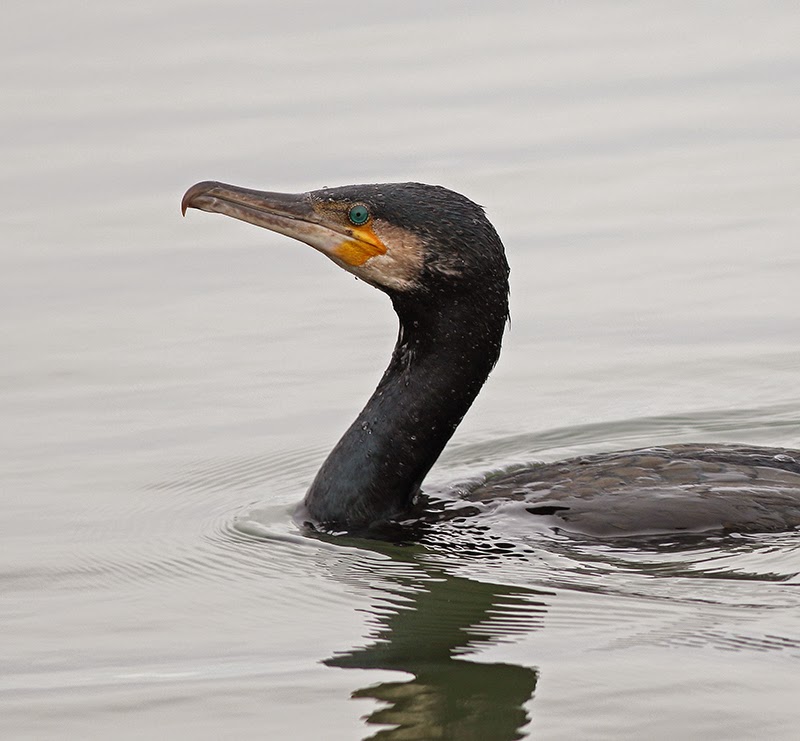 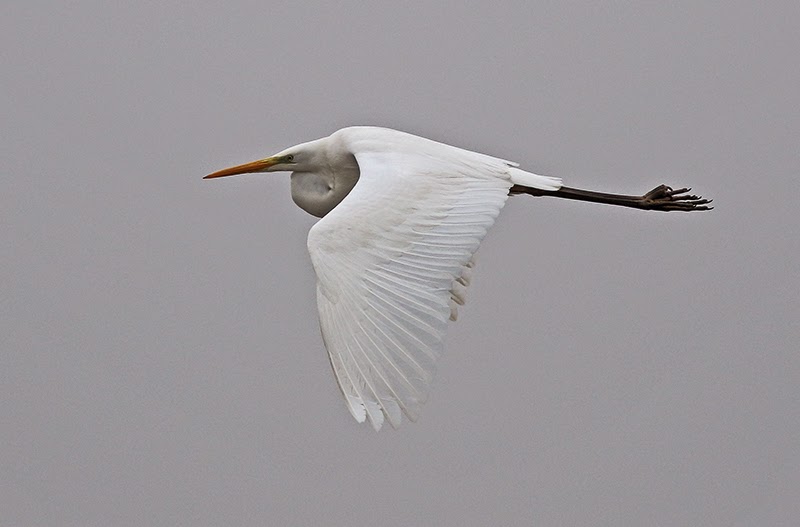 All in all a fantastic morning.