Another Afternoon with Falco peregrinus

The day started with a walk around Newdowns  and along the river bank. As it happens this was pretty productive and a report of what was seen can be found on the SBBO web site. I left around midday (before the raptor fest) and since the sun had come out I went to Dover to have another go at photographing the peregrines.
I followed the same routine as before - standing south of Fan Bay and waiting for the peregrines to come by. My first sighting of a peregrine was actually of one on the ground on the other side of Fan Bay and one or other of the peregrines kept returning to the same area thoughout the afternoon: 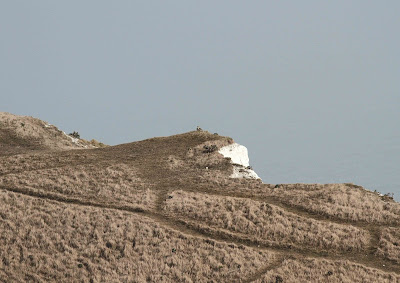 As with my previous visit the birds spent some time on the cliffs, some of the time dive bombing each other and some of the time simply flying back and forth. Hopefully this series of pictures will give some idea of their antics:
﻿
﻿

On several occassions one or other flew directly at me, passing  close over head: 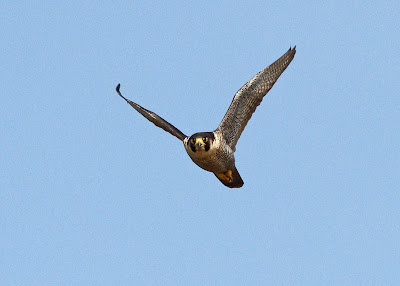 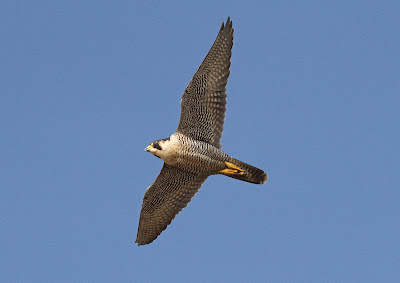 The shot I really wanted though was of one going by below me. This proved to be elusive because  they tended to fly south just overhead then returned north at the desired altitude but always over the sea and into the sun.
Eventually my luck changed and the juvenile flew low into the Fan Bay hollow then out over sea below and to the north of my position: 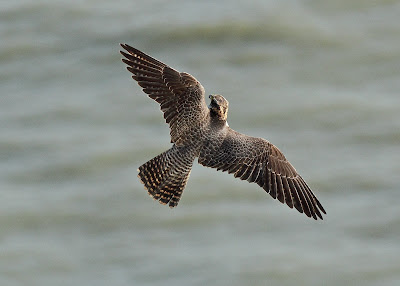 Whilst  all this was going on I got some close-ups of the juvenile with the thin moustachial stripe.
When I left one bird was perched north of Fan Bay  ( in the same position shown in the first picture) and another was on a ledge south towards the harbour:
Posted by Greater Kent Birder at 23:12