Today I had another trip to Dover harbour to try and connect with the Kumlien’s gull. The gull was first seen on Sunday afternoon and I think this was my forth attempt to connect with it – needless to say my other efforts had been fruitless. This had been especially frustrating as everyone and their brother had been telling me they had seen it either before I arrived or after I’d departed and had been posting pictures of it on Flickr to rub the point in.
I arrived about 8.15 and could see Steve Raynaert walking out onto the Prince of Wales Pier just ahead of me. As we were walking  out the Bockhill crew were  returning – they had seen the Kumlien’s flying about and were going to the Admiralty Pier to try and get a better view.
Being lazy Steve and myself continued out on the PoW in the hope it would come to us and checked the gulls on the hover pad. It wasn’t there but we did see 3 species of wader – dunlin, knot and grey plover; you don’t often see waders in the harbour. We spent about 10 minutes  looking at the gulls flying about in the harbour but reluctantly gave up and followed the Bockhill mob onto the Admiralty.
When we found them they were looking at the Kumlien’s which had been feeding (on bread) just below where they were standing but needless to say it flew off just as we arrived.
The next couple of hours was spent wandering  back watching the gull and trying to get some decent pictures.
At first the light was so poor I used my Sony outfit and although it kept locking up I did eventually get it to work and managed a few pictures. The light was very difficult being a near white sky as was getting it to focus on the gull as it flew past. 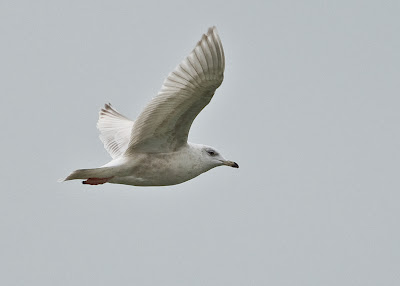 As the light improved I started using the Canon (set on manual because I don’t find the exposure compensation very easy to use on the Canon); the light was still a problem though focussing was not an issue.
Whilst the gull was away from the pier(it kept disappearing) we managed to amuse ourselves with general birding watching.  On the water were razorbills and shags (we’d seen 3 together from the PoW pier) and flying past very close were kittiwakes. There was also a movement of ducks with gadwall, shoveller and wigeon being seen (the latter by Chidders) plus  a small flock of brents.
Chidders had been on the PoW pier but after a chgat on the phone had come round to the Admiralty to join us. This proved to be a stroke of luck because literally the moment Chidders turned up so did the Kumlien’s but Chidder’s had come prepared.....he had a loaf.
Out went the bread, down came the Kumlien’s and snap when the camera – the best shots of the day by a long way.
Posted by Greater Kent Birder at 16:35