Those out there who know me (and my camera) will know that I have been one of the few local birders  who used Sony kit. My camera (the Alpha 700) however is getting long in the tooth and has been increasing temperamental. I was hoping the new Alpha 77 would be the answer. Well after 6 months of thinking about it I finally decided it wasn’t for me. The Alpha 77 is stacked with excellent features but unfortunately it falls down with respect to the one critical feature – taking photographs! It suffers from very noisy images (especially in raw).  It would seem the camera software does a reasonable job at suppressing the noise if you shoot in JPEG but the cost is loss of detail. Which rather defeats the object of stuffing the sensor full of pixels (24 mega pixels).
After a lot of thought, reading , discussion and soul searching I decided on the Canon 7D with the (non-image stabilised) 400mm f5.6  lens – my reasoning being that above 1/400-1/500 sec the lack of image stabilisation should not be too much of a problem and if it’s so dark I can’t get those shutter speeds the pictures would probably only be a record shot anyway!.(And anyway I'll still have my Sony for the dark days assuming it can be pathed up)
So there you are, I have joined the Canon Clan which is rather sad because I rather liked being different.
The camera arrived a week or so ago but the lens didn’t arrive till Thursday afternoon so Friday was my first run out. Luckily the sun shone and after a short look at Dover harbour (2 dozen auks - mainly razorbills, and a similar number of kittiwakes) it was off to Folkestone to photograph med gulls.
At Folkestone my luck was in because as I arrived a couple sat on one of the benches and started feeding the gulls. This meant I didn’t have to and could position myself optimally to try out the kit.
Needless to say I was still pretty unfamiliar with the camera but the first impressions were that it was clearly a whole heap faster at focussing than my Sony outfit though at times I did miss the zoom facility – the gulls being too close to get in shot.
After 20 minutes or so the gull feeders departed and so did I.
Next stop was the old rifle range at Kingsdown where I spent some time photographing the fulmars. Again the Canon showing its superior tracking relative to the Sony.
Conclusion: I know the light was good but for a first time out I was pleased with the results.
Saturday I stayed local walking from Oldstairs bay along the track past Ottey Bottom up to St Margaret’s. I was hoping to find some yellow hammers but I didn’t – these have shown a significant decline in the area over the last few years to the extent that despite several attempts I still haven’t managed to connect with one this year. All was not lost though because there were a good head of chaffinch and the common tits (great, blue plus a few long tailed), a huge number of blackbirds (they were everywhere) and ~5 song thrush.  I also had the pleasure of finding a pair of bullfinch and my first blackcap of the year (a female).
I returned to the sea front and decided I’d have half an hour on the rifle range hoping that a peregrine or kestrel would fly by. Well they didn’t but a raven did.
I was alerted to the raven by the jackdaws which really didn’t like it being there and mobbed it both when it flew and when it landed. It went back and forth several times allowing me to adjust the exposure and get some flight shots (it was always too distant when it landed). 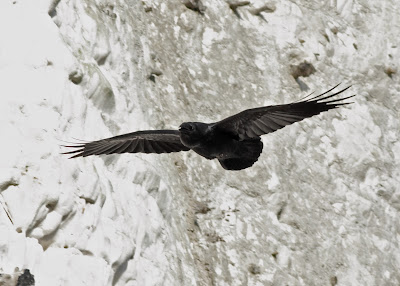 Again I was pretty pleased with the results though I had to up the ISO to 640 on some of the shots to keep a decent shutter speed.
Posted by Greater Kent Birder at 23:18