I expected my first days birding this year at the Obs to be one of just ticking off the common birds. Ian and I were well on the way to Newdowns farm and we were feeling pretty pleased with 3 bullfinch by the entrance to St Georges GC when Andrew Lipz pulled up to tell us he’d found a green winged teal in amongst the 228 common teal on Restharrow scrape. He’d driven down because he’d forgotten his phone but his forgetfulness was our gain as he drove us back to the scrape.
The bird was still on the far bank and a few record shots were obtained but it was too distant and too dark for them to be much good. Whilst Ian and myself were texting around the bird disappeared and it took about 30 minutes until we had relocated it on the left hand side of the main island – a lot closer but now partially obscured by the bank.  We had totally missed it swimming across. The moral here is someone should  keep an eye on the bird!
After an hour or so we gave up and retired to the Obs for a welcome coffee after which Ian resumed our interrupted walk but I went back to the scrape. This was my first ever GWT (and only the second recorded in the Obs’s  60yr history) so I thought it deserving ofa bit more of my time.
Eventually I got some reward as the bird came closer and I managed some half reasonable shots.  There was a price to pay however as the East Kent retired birders  turned up (Mr Morris, Gawley, Aston- I know Mr Ashton nominally still works but he’s out birding as much as me!) and some new year insults traded!! All good fun though. 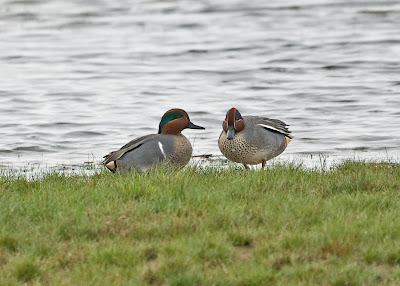 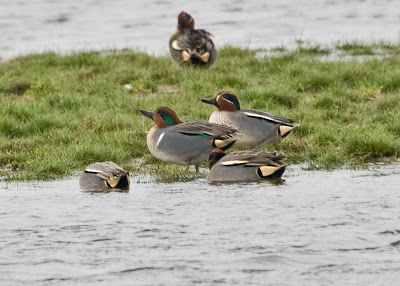 For those unfamiliar with this species, as well as having a vertical white bar down from the shoulders (rather than a white horizontal stripe above the flanks) the GWT lacks most of the yellow lines bordering the dark green head patches - best illustrated in the middle picture.
I didn’t get as many ticks as I expected but getting a life tick on my first outing at the obs was a very nice way to start the patch year list
For those interested a few more shots are on my Flick site.
Posted by Greater Kent Birder at 15:57