Today I went to the Point with Ian. This was my first real outing of the year at Sandwich what with the weather and the green winged teal turning up – which hasn’t been seen since by the way.
The walk up was hard work with little to see other than a few skylarks and mippits and no sign of any stonechats, snow buntings, shore larks or Dartford warblers (ever the optimist!). The wader roost was south of the restricted area and allowed me to pile on a few year ticks in the way of dunlin, sanderling,  grey plover, knot, bar-tailed godwit. 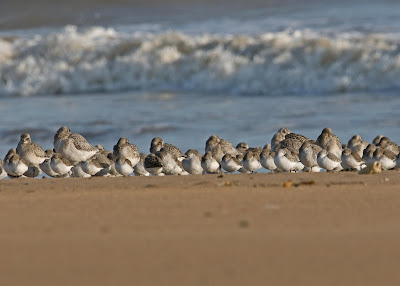 Also on the beach were a few gulls with one in particular looking interesting being absolutely huge and having a dark grey mantle and looking to have a very white head.  First thoughts were of a yellow legged gull on closer inspection we settled for a agentatus (not least because it didn’t have yellow legs!). A scope would have been handy at this point but it’s a long way to lug one.
The hundred acre field and the point held better numbers of skylark and mippit and a lone marsh harrier (young male) and over Pegwell the golden plover and lapwing flocks provided an impressive, if distant spectacle.
Much the same on the walk back until we were about 400 yrds north of the car park where we flushed 11 snow buntings. Every time I have seen this flock (the last 3 times I have walked to the point) it has been on the return leg suggesting they roost and/or get pushed off the golf course as the morning wears on.
In the afternoon I popped down to Dover where it was pretty as normal – great northern diver (always distant) about a dozen auks(guillemots and razorbills) about 10 kittiwakes and a shag that appeared right below me for a few seconds then promptly disappeared again – I think it was too close to the pier to see.

Oh and the common seal is still there scrounging fish off the fisherman.
Posted by Greater Kent Birder at 19:06