A Day at Dungeness

Today was my first day out – yesterday I was recovering from too much booze and no sleep at all ..........well none until after it had got light. Overall I don’t think I missed too much other than the gannets at Dover. Chidders had kindly phoned me about their presence  but I was in no state to drive so that was that.
Today was the now routine Kingsdown birders excursion to Dungeness.  First stop for the 3 of us ( Steve Coates (Kingsdowner ) and Pete PW) was Dover docks.
We started by the lifeboat and managed to see the great northern diver but got better views  a little later from the POW  pier. On the pier we found a Chidders and from the pier we found  razorbills, guillemots, gannets, kittiwakes and assorted gulls. We left after 30 minutes but by then Tim had arrived and from what I have read everyone else arrived a little later. 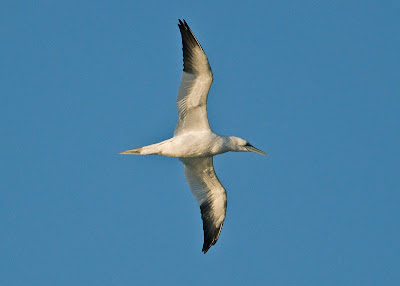 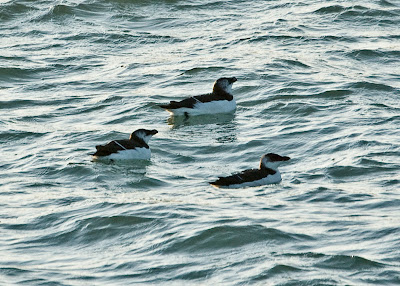 Next stop was Welland Marsh where we found a small flock of tree sparrows and a little further on the bewicks (33). They were several hundred yards away but a few record shots were taken.
After that we proceeded to Dunge and went searching for gulls and had a look at the sea. Nothing interesting in the gull flocks we found on the shingle but the sea near the fishing boats was alive with guillemots, razorbills, gt crested grebes, gannets (80?) and a few red throated divers (6-8 just in front of us).  The gannets were probably about 500 yards off shore but they were actively fishing –impressive stuff.
We were told that the Caspian was in a roosting flock of gulls back towards the lighthouse but as we approached 3 people with their dog went straight through the middle of them. We hung around for a while and some of the gulls returned but not the Caspian. Eventually we gave up and departed but as we were returning to the car Steve asked a couple of other birders whether they had seen the Casper  – they thought they had, just by where we had been standing. The bloody thing had come in and landed with the small flock of black heads just after we had left. We retraced our steps, spent a while looking at the bird and getting a few shots. I never tried to get  very close as there were a lot of birders down there searching for it but I should have done because a few minutes after we had left some more walkers scared everything off again.
The next stop was the RSPB/ARC but as we were driving along the main road Steve spotted 2 of the great white egrets in the pit on the opposite side of the road to the ARC – they were too far away for a photo.
From the ARC we had most of the common ducks (but no pintail) plus some goldeneye and the long-tailed duck but no smew (one had been seen earlier). Other than lapwing there were no waders present. We did get a bonus bird from the ARC in the shape of a bittern that flew sedately along the lake and landed over by the screen. We did go to the visitor centre to check the sightings boards. Not much to make us walk the circuit but there were at least 6 tree sparrows around the feeders – so some pleasing shots obtained.
Next stop was Scotney where there were a lot of grey lag, about 50 barnacle geese and 7 things with grey brown bodies, white heads and black beaks; heaven only knows what they were. Scotney was devoid of ducks though.
We didn’t stay long  and soon moved onto Pett Levels. Lots of curlews, a few redshanks and more geese – greylags and Canadas mainly but a few Brents were feeding on the grass and 5 white fronts flew in as we were watching.
Our final destination was the Woolpack (though this was on the way home so no problem). We watched the marsh harriers coming into roost but there was no sign of any hen harriers tonight. Bonus birds however were a peregrine and a merlin.
So that was my first day. We managed most of the target birds (great northern, Caspian, great white egret) only missing out on the glaucous (no one we spoke to had seen it). We did quite well on raptors with kestrel, sparrow hawk, merlin, peregrine, buzzard and marsh harrier but the small stuff was in very short supply – no linnets or mippits for example and no thrushes at all (other than a few black birds). Who would have thought you could spend a day around Welland, Dunge and Pett and not manage a single song thrush, mistle thrush, fieldfare or redwing?
Overall we managed 72 species (by my count) and I managed some reasonable pictures of tree sparrows and my first picture of a Caspian (unless some one tells me we have miss-identified it!). Not too bad a start to the year.
Posted by Greater Kent Birder at 23:08