Today started at Sandwich where we did an hour’s sea watch. There was a little bit going on with quite a few red throated divers flying back and forth along with about a dozen gt crested grebes on the water. The actual number of divers out there however wasn’t appreciated until a fishing boat moved past south flushing  the divers before it  – 30+ went past in a couple of minutes.
The only ducks seen were 4 wigeon and at last there were a couple of guillemots (my first for the year in the Bay).
We gave up about 9.30 and returned to the Obs for a coffee which was lucky as the rain came down after that.
After stopping in Deal to do some chores I decided to stop at Kingsdown beach to have another look at the sea. You may well ask why and Indeed I was asking myself the same when I spotted a duck a couple of hundred yards out to sea.
I got the scope onto it and immediately my thought was velvet scoter due to the white diagonal line on its flank so I grabbed my Collins to check what I should be looking for.
The next hour or so was spent watching it hoping it would flap it’s wings and show the white secondaries to clinch the id. The bird stood up in the water quite a lot but didn’t flap. It even splashed about on several occasions but always with its wings near to or even under the water. 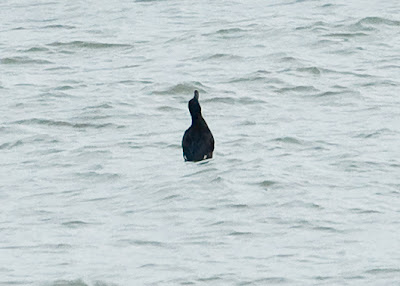 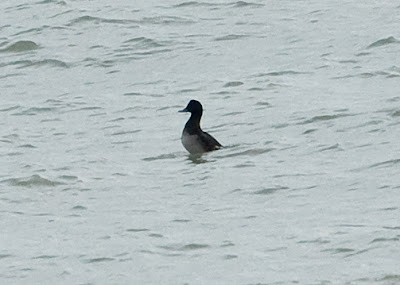 Eventually it made a short flight and although this was the time the camera decide it wanted to lock up it did free itself in time to allow a couple of shots to be made.
The bird has a very pale belly so I think that makes it a juvenile. It was still there when I departed 12.35.
I didn’t see a lot else whilst I was there but the fulmars are back on the cliff face, there were a few red throats and gt crested further out from the scoter and a curlew landed on the exposed rocks.
So a quiet day but one that delivered quite a difficult year tick and with some record shots to boot.
Posted by Greater Kent Birder at 17:31