﻿ ﻿﻿I only had an hour or so on Saturday so I popped down to Dover Harbour. There was no sign of the gt northern  diver today but there were several shags in amongst the numerous cormorants and 10-12 auks(4+ being razorbills) – with most of the auks being in the cruise terminal part fo the harbour.
Today I went to North Foreland to try and twitch the twite.  I arrived at ~8.00 and spend the next hour or so studiously studying cauliflowers - not a bird in site.
I was up near the pump house and just starting my 2nd circuit of the field when I saw 5 small birds bouncing around. They landed on the bush near the pumping station but flew off before I could get close enough to confirm their id (they had been totally silent). They disappeared over the brow of the hill/cauliflowers in the direction of the Joss Bay car park with me following.

I surmised that they would prefer the short weeds rather than the cauli field so  I started making my way along the edge of the field searching the weed fringe between the cauils and the grass and thats where I found them. The views were still poor though confidence in their id was increasing when a couple of them flew up onto the top of the caulis in full view. I’d already got the camera ready so fired off a few shots then they flew back up the hill towards the pump house.

I checked the results...............RUBBISH!!!!!!!!!!!!
﻿﻿  This could have been quite a good picture with the pink rump showing nicely.
Yesterday I was experimenting with the camera taking shots with the image stabilisation on and off and I’d left the bloody thing switched off. The result being that I need better than 1/400th to get a decent hit rate. Here is the best of the bunch, taken at ISO 800 and 1/250th. I was not a happy.
Hopeful of another chance I walked back up the cliff top path to the pump house where I met Phil Parker. For the next hour or so we wandered around the field but couldn’t find them. We were on our last sweep of the bottom edge of the field when we located them. This time they went up before I could get close but as they flew they were joined by another 2. They flew towards the cliff top and disappeared over the edge and out of site. At that point Phil did give up though I had one last circuit again locating them on the lower edge of the cauli field. Again they were very flighty though I this time managed a couple of shots of them on the ground . I was nowhere near as close as previously but at least I had the IS switched on now. 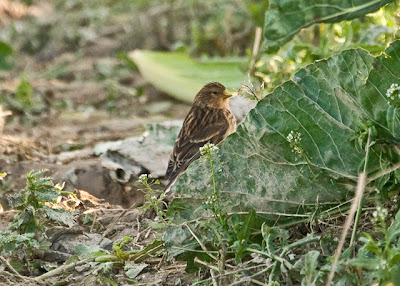 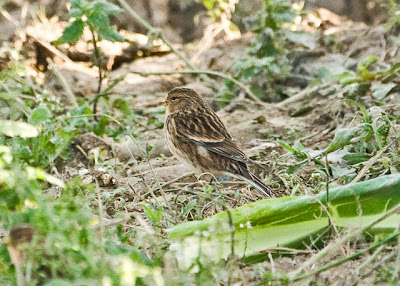 The last time they flew off there was 8 birds. I have no idea where the extras kept coming from.
I didn’t spend much time looking at the sea but there were a few divers moving but not a lot else. As  well as the twite I did chalk up the first fulmar of the year raising my total to 118
Posted by Greater Kent Birder at 14:37