Saturday (21st) started at Dover harbour but no divers were to be found. I counted 5 shags fishing near the life boat station and 19 gt crested grebes in the main harbour. On the auk front there were about a dozen in the harbour and from the end of the Prince of Wales pier I could see another around 50 in the harbour mouth.
After Dover I went back to Kingsdown and immediately could see there were a lot of auks off shore. I set up the scope and in the first 3 minutes (9.36 to 9.39) 100 auks had flown past. I reached 200 by 9.43 and stopped counting. Most were quite distant though a few were close enough to point the camera at.
There was also a fishing boat off shore so I spent some time trying to get the auks and the boat in the same frame.
The auks continued to move  south throughout  my stay though there were some going back the other way and a lot were just sitting about on the water.  I also saw about a dozen divers flying south with those close enough to id being red throats.
Directly out from Kingsdown there were a few gannets, some fishing but most just sitting on the sea but there were a lot more (~50?) down towards St Margarets.
Sunday I again went to Dover but didn’t stay long because the pier was shut. I had another look at the sea from Kingsdown but there was very little moving (especially when compared to Saturday) so as I was going to Ramsgate later in the morning I gave up and went home.
At Ramsgate Angie, with me in tow, did her shopping then we returned to the harbour to look for the red throated diver Steve Ashton had told me about. From the harbour car park I spotted it over by the lock gates but by the time we walked round there it was in the middle of the boats and disappeared towards the north(?) end of the inner harbour (left hand end as you look out to sea).
We went back round onto the prom when it emerged and swam past us only a few feet from the wall. At one point it swam along in the 2 foot wide strip of water between the sea wall and the floating walkway though the camera locked at that time and I missed the shot. 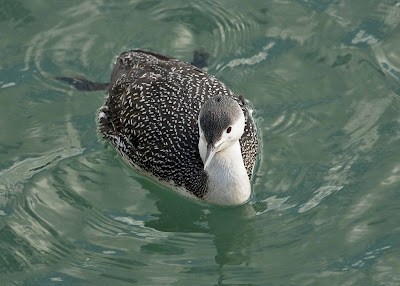 I was told the merganser was still around but didn’t have time to go and look for it but I did see a small grebe. I only saw it the once before it disappeared amongst the boats though it may have just been a little grebe as one was reported Saturday on Planet Thanet.
Posted by Greater Kent Birder at 19:06