The day started very slow in that a circuit of the SBBO reporting area resulted in us seeing next to nothing. A few ducks on the scrape plus a fly-by ring-tail hen harrier, a few plovers on Worth marsh getting upset about a peregrine and that was about that.
In an attempt to find something to point the camera at I went to Russell Gardens/Kearsney Abbey hoping to find a grey wagtail – always a nice bird to photograph and it would be a year tick.
Things didn’t look good to start with as I couldn’t find one during my first circuit of Russell Gardens but a second circuit resulted in 2 being found on the nearly dry ornamental lake.  The dry lake bottom was in the shade but I cranked the ISO up and managed a few shots before they flew off to pastures new.
I returned to the car and just as I was getting I spotted a grey wag on the car park but now in the sun. Out with the camera and some more shots of it flicking through some leaf litter where it found an earwig (picture on my Flickr site).
Feeling much better I went off to my second Dover destination – the cliffs at Langdon where I hoped to find raven and peregrine..
It was much colder up on the cliffs and bird-wise it was totally deserted (other than herring gulls) but after about 10 minutes I spotted a peregrine coming from the north – flying into the wind and with the sun behind me.
It stopped coming south just north of Fan Bay and hung high in the wind until it put its head down, dived into the Fan Bay depression then tore out over the sea and past me at cliff-top height.
I could still see the bird south of me, just hanging in the wind high above the Langdon visitor centre. Eventually it came back north and after hanging around flew back south right over my head – in fact it hung right overhead for several minutes and I found the easiest way to take pictures was to lay on the ground:
After a couple of circuits where this was repeated a second then a third peregrine turned up. 2 were very large compared to the third and I watched them swooping down at each other – this unfortunately mainly took place quite a distance south of where I was so no images I’m afraid.
The trio did on occasions come north of where I was standing and I managed to get a couple of shots (distant) where the relative size of the birds can be seen:
After an hour or so of displaying they seemed to have disappeared but just as I was about to leave one came back and from north of me flew past at cliff top height close enough to get some reasonable images: 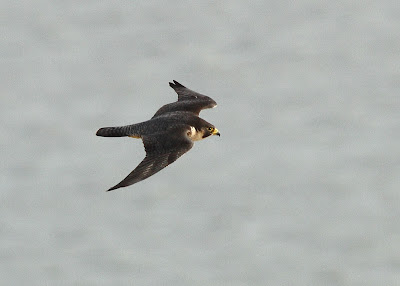 Then they were gone.
My initial thoughts were that it was a pair plus a juvenile from one of their previous broods however none of my images show a juvenile. There is certainly a male and a female though looking at the breast plumage on the other female it would seem it is either not a full adult or it's something else - a hybrid? Any thoughts appreciated
All I saw other than the peregrines were herring gulls but I’m not greedy.... the ravens can wait for another day.
Posted by Greater Kent Birder at 23:52