I’ve not posted anything for several days because there’s not been much to say and absolutely nothing to photograph – not helped by having quite a heavy session on Friday night which put paid to the whole of Saturday.
Highlights of the last few days  were the  goosander on Newdowns reservoir (always the far end) and 12 snow bunting on the beach near Princes Old club house.
Today saw another slog from the Observatory to the beach then north towards the point where we gave up at the 100 acre field entrance. All we saw on the way out were a few mippits and skylarks – it was dead. The 100 acre field itself was little better with the highlight being ~200 stock doves. During the return journey we  concentrated on England’s performance against Wales (Rugby for the uninitiated) which, despite the loss,  was very heartening given the rubbish the England rugby team  turned out in the World Cup. We did find the snow buntings eventually - on the beach opposite St George’s. As far as I know they’ve not been seen this far south before. All in all not much to show for 3 hrs of walking.
I then decided to go and play with the peregrines. On my last 2 visits to Dover cliffs I had been pretty chuffed with the photos I managed of various birds in flight. Then Mr Ashton and Gutsell posted their stunning shots on the male perched on the cliff top.
I was pretty sure I knew where they had been sitting so I made my way there and as I was getting myself arranged up popped  the male peregrine.  Speaking to Steve later on it seems I was further away than he had been but by the sound of it I was in a somewhat less precarious position! 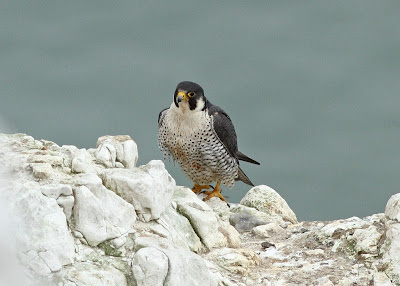 The peregrine clearly had blood on its breast and spent the next 10-15 minutes preening  before flying off only to return a few minutes later.

This was repeated 4 times but on the 4th fly-about it returned with a small bird in its talons – which was quite amazing because it had been away from the ledge less than a minute for this last sortie.
I’m not sure what it was it had caught but I suspect it was a young pigeon – it was grey with pale underside but looked too small for an adult rock dove/feral pigeon. Whatever it was the peregrine immediately set about it tearing the feathers off then ripped off lumps of meat.

The plucking and feeding continued for about 10 minutes when a couple strolling along the cliff top came to ask what I was photographing. Whilst the bird seemed tolerant of me sitting there on the cliff top it didn’t like the couple towering over me and departed.  It hadn’t returned after a further half hour so I departed as well.
Posted by Greater Kent Birder at 20:40