I didn’t have much time today so I decided I’d have an hour on Deal pier. I was quite hopeful due to the reports of some movement off Dungeness during the last few days but it wasn’t to be and what little was about was miles out.
I had about 50 gannets going north with a dozen or so coming south – the southerly birds being a bit closer thankfully.
There were 5 gt crested grebes just sitting around and I noted 10 divers (red throats I assume) all moving north.
The only ducks I saw were 2 teal – again going north and there was a kittiwake hanging around the pier.
When my time was up I walked north past the Royal Hotel to check out the gulls on the beach before going to the florists (loving husband that I am) but the gulls were forgotten as I heard a snow bunting. Frantically scanning around eventually I found it on the prom just north of the Royal.
I grabbed a couple of shots but couldn’t get closer because there were promenaders  and dog walkers everywhere. 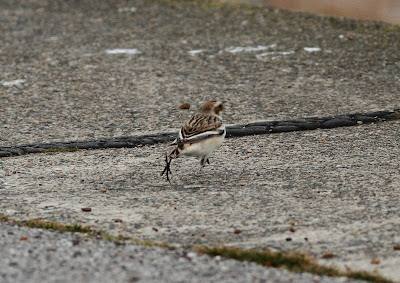 Due tothe disturbance the bunting flew up and down a couple of times then it gave up and flew off over the sea towards the pier and that was that.(Other than getting the flowers).
Posted by Greater Kent Birder at 16:51