This past week or so my birding has been restricted by the weather and although the sun was shining today I only had an hour or so. As a consequence  I went down to the old Rifle range at Kingsdown to check for migrants.
I have seen stonechat, wheatear, firecrest, black redstart on the rifle range in early March previously but not today. There was nothing! Well at least there were no migrants.
As I walked along the range the sea-weed covered rocks were still showing and on them were a couple of curlew, as normal though they took flight as soon as I came in sight.
I was about 50 yrd along when I looked back and could see 2 kestrel  flitting about so I turned back. As I approached it was clear that they thought spring had sprung:
And after the deed they sat around taking in the surroundings. I waited for about 10 minutes hoping that one would fly but they resolutely stayed where they were – exhausted obviously. 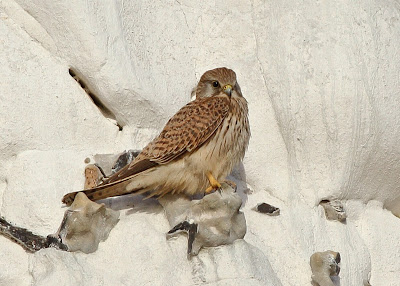 I resumed my walk along the range and then from the south along came a peregrine which flew past then circled out to sea and returned to the cliffs near where I was standing. He (at least I think it was a he) then stayed put for the rest of the visit. 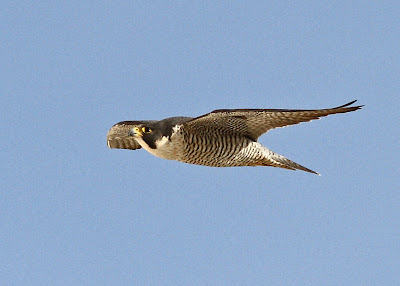 The only other birds on the range were a couple of rock pipits and the resident fulmars who were also thinking about procreation.
After that I went up onto the cliffs where a steady  stream  of chaffinch were going past. In 20 minutes I’d counted 160 or so moving north and that’s not including the dots that were going past at too higher altitude or too distant to id. Needless to say I tried to get a picture but it’s amazing just how much of their flying time is spent with their wings folded.
Posted by Greater Kent Birder at 20:39