Monday 19th promised a day of sunshine so I decided to go to the woods.
There was no seed on the log when I arrived at Bossendon so I baited up and went for a stroll. As it happens I didn’t see that much just the common tits, several gold crests, a lone fire crest (high up) but no lesser spots.
By the time I got back to the log 2 nuthatch were coming regularly for food. This was actually quite interesting in that they clearly preferred the sun flower seed to the peanuts. In addition it was the whole sunflower seeds that they carried off and the sun flowers hearts they ate whilst on the log.
I stuck around for about 30 minutes photographing them by which time I had ~ 120 shots which, on the back of the camera, looked very good. In that time only a single visits by a great and blue tit; no sign of the coal tits (frequent visitors last year) or marsh tits(frequent visitors in 2010). 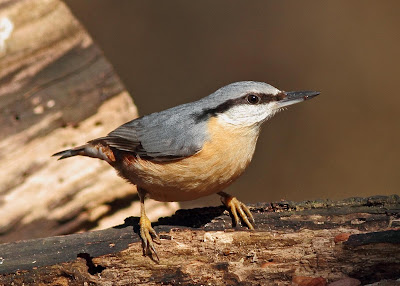 I don't believe this level of detail would ahve been possible before my adjustments to the focus so pretty pleased really.
Tuesday was back to the normal routine at Sandwich but it was slow. We did eventually find 4 wheatears along the beach plus  a lone black redstart and white wagtail at the Chequers but they were always distant.
A walk over Worth marsh yielded the garganey that been out there several days but the only other bird of interest was a smart peregrine just standing on the turf about 50 yards from where we walked.
As we arrived at the Obs I noticed my car was missing – stupidly I’d forgot I’d parked at Restharrow scrape.  After a brief pit stop we went to collect it taking in Middle Field (nothing there) and the Elms which also was near birdless until a flock of 16 crossbills dropped out of the sky and started feed in in the few pines growing there.
Whilst they were in the tree tops the trees are not that high and this was by far the best views I have had of crossbills. They were around for 5 minutes or so and a few were in view (though often obscured) nearly all the time. Getting shots of them perched up high was straight forward but when they were in amongst the needles it was much darker and I didn’t have the shutter speed to freeze the movement when they were actively feeding (which was a bit sad because I had (fuzzy) shots of them opening the pine cones) but  overall the camera performed well so I’ll stop talking about it from now on. 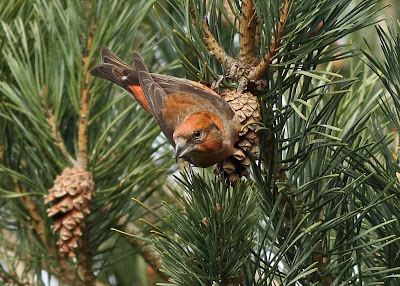 In the afternoon I went over to Grove (it was there or the peregrines) where I had the 3 garganey from the ramp and another from the Marsh hide and a meadow pipit posed for the camera:
No sign of the glossy ibis as far as I know.
Posted by Greater Kent Birder at 23:03