The weather forecast for the local area was not encouraging – fog – so I decided on visiting Folkestone Warren as Folkestone was forecast to be fog free. Well fog wise it was better than Kingsdown but it was a waste of time. Plenty of dog walkers but next to no birds.
As I returned to Kingsdown the fog was lifting so I decided to take in the Rifle range where I immediately found 2 flocks of brent geese – one of 120 birds feeding on the exposed weedand the other with 57 just floating. I know brents are common but to get numbers feeding or on the sea down here is quite unusual. Whilst I was watching them another 9 dropped in. 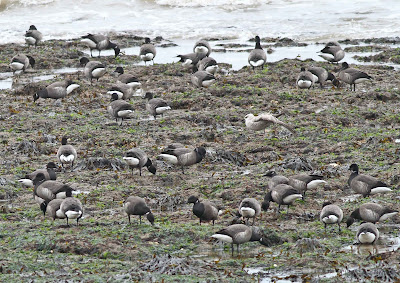 Given the wind was a north easterly I decided to stay a little while and do a sea watch.  I suppose inevitably given the last few weeks the next bird I saw was a peregrine flying fast and low over the sea but it turned towards me, flew over one of the flocks of brents (which didn’t bat an eyelid) then cruised along the cliff before landing on the cliff face. A few minutes later a second (male) came into view calling then the two of them had a general fly around swooping on each other a few times before disappearing north. 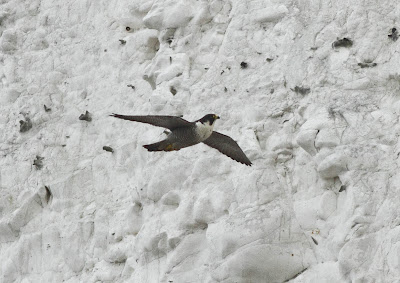 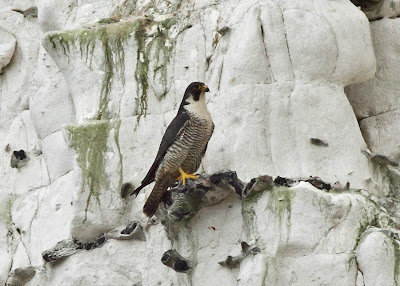 Back to sea watching and a distant red throated diver flew north and 3 oyster catchers went south then there was a few minutes of what constitutes real excitement at Kingsdown when 3 red breasted mergansers went past followed by 11 avocets.
I was bracing myself for it all to kick off but that was it really other than a few resident curlews flying back and forth.
The rest of the country may be basking in near summer temperatures but it was decidedly cold today – it had only got up to 5C by the time I departed, still it turned out better than I’d expected so I went home happy.
Posted by Greater Kent Birder at 18:39