The weather changed for the worse today (well compared to yesterday) but the birding took a significant change for the better. We did the normal circuit this morning – across St George’s to the sea front, down to the Chequers then back along the Ancient Highway taking in Restharrow, the Elms and the Gullies.
It wasn’t long till we found the first tick of the day – a male wheatear sitting atop a bush on the golf course who was causing quite a bit of consternation to the resident mippits.  We were on the sea front counting grebes when a flock of 8 geese came in off the sea then turned south flying straight towards then over us – pink footed geese and another year tick. The geese flew south and for a minute they looked as if they were heading for Retsharrow but they changed their minds and continued south until out of sight.
We continued along the beach seeing nothing of note until we reached Restharrow (the house which I hear is up for sale – anyone got a spare £4million?) where Ian spotted a black redstart on the garden wall – tick number 3. The redstart was feeding well making its way (south) along the wall dropping to the floor then coming back up. When it ran out of wall it continued along the fence (around the Cellars) and when it ran out of fence it flew back north past us into the Cellars bushes and that was the last we saw of it. No pictures I’m afraid as I never got close enough.
Continuing south towards the Chequers we could hear geese calling out to sea then out of the gloom and coming straight towards us (again) were the pink footed geese. I got the camera out this time, guessed a setting and managed to get off a few shots: 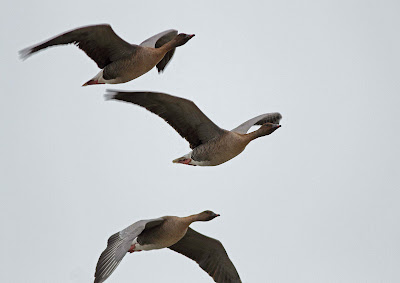 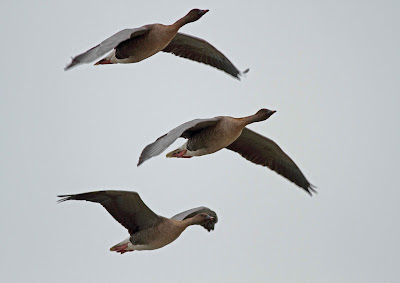 They are not brilliant but not too bad given I only had 1/500th on a non-IS lens.
On the walk to the Chequers we had another wheatear and Ian heard a spotted redshank – I didn’t I was concentrating on the wheatear which was disappearing rapidly up the beach.
The rest of the walk to the Chequers was almost birdless however there was a chiffchaff in the bushes near the Cinque Ports Reservoir  and on the reservoir itself a red throated diver – though why it is there is anyone guess. 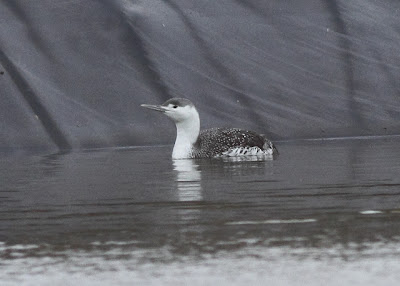 No sign of any cranes on Worth marsh today (I know they were seen disappearing east over the sea yesterday but they had flown off before on several occasions and returned) but we did  find a black-tailed godwit along with 3 red shank out on the marsh as well as a small flock (25-30) golden plover.
Restharrow scrape held the standard ducks and grebes and another black-tailed godwit and the Elms/Gullies had a number of chiffchaff -  we had about 15 on the circuit which compares to zero when I did the same walk on Wednesday but then again we didn’t have any black redstarts, wheatears, divers or godwits on Wednesday either!
So a good day with 3 year ticks now I just need some more to turn up when the weather is brighter.
Posted by Greater Kent Birder at 16:56