Today in the strong SW wind we set off out of dtuy rather than hope or expectation and for much of the morning we saw what we expected - nothing.
From the Obs we walked to the Elms (a couple of chiffs and a blackcap) and up to the sea and that’s what we saw.....the sea. After that it was off to the scrape where a couple of lapwings and a mallard appear to be sitting but still no sign of any migrant waders.
Coffee beckoned but on the way back to the obs we decided to have a look in Middle field. Thius did appear to be one of the best possibilities of finding something because the field is enclosed and consequently calm compared to the rest of the estate.  Thes was a whitethroat singing as we entered followed by a chiff or two then Ian called “Pied Fly”. Now with it being so useless everywhere else I strolled up and asked was he p***ing about and to my surprise he said no and pointed out the bird – it was perched about 10 yards away.
A quick scramble for the cameras resulted in me losing sight of the bird though Ian was clicking away – it had dropped down low and Ian  was between it and me.
After a few seconds it moved to the right and although now in view was heavily obscured: 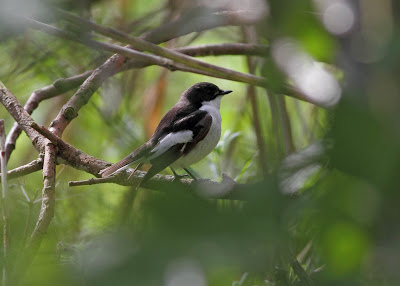 It continued to move around quite close but nearly always obscured for a couple of minutes then it disappeared.
Since there had been so little around to point the camera at when the others moved off  I decided to stay in the hope it would come back. It did. Over the next half hour or so it came close on several occasions but whenever it was in the open it would only stay there for a second or two. As a consequence I couldn’t manage a clear shot. 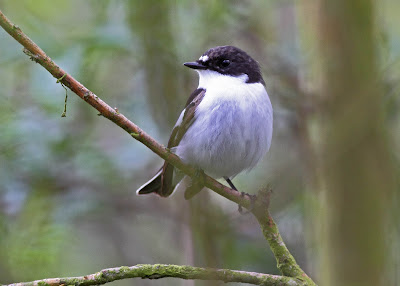 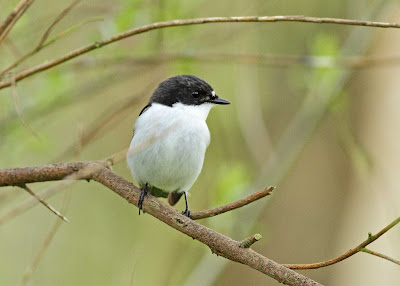 A couple of times it landed less than 5 yards from me and in the open but it always shot off before I could get the camera onto it.
Finally I saw it drop into the undergrowth just a few yards away and waited hoping it would fly up to one of the twigs above it which were in the open. I set the camera to point at the twig and for once things worked out to plan.  As it landed it was side on I just pressed the shutter and rattled off 6 continuous shots then it was off again. Since the 7D fires at 8 shots per second it was only in shot for less than a second. 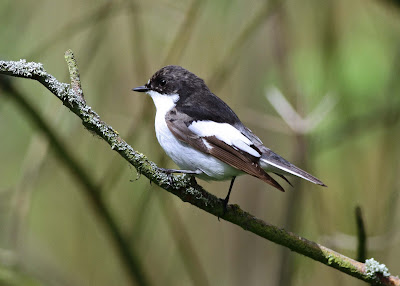 Still I had some shots so I called it a day and left him to it. It doesn't need much to send me home happy.

Posted by Greater Kent Birder at 17:07