Ring Necked duck to the Rescue

The last week or so has been slow to say the least in the Sandwich and Kingsdown areas with few birds and no pictures. Today I decided to go to Dungeness to try and change my luck.
I did start at Kingsdown (because I had to take my wife and daughter to the station at 9.00) and on the Rifle range I had the black redstart ( I'm pretty sure it was the same one as previously by the colouration) and a wheatear – the first of the year there for me.
The kestrels were also on the cliffs.
I did spend half an hour on the cliff top but there was little moving – about a dozen linnets and a lone swallow.
On arriving at Dunge I started at the ARC but on the way to the hide there was a stampede of scopes and cameras in the opposite direction. One guy had the decency to stop and tell me a ring necked duck had been found and could be seen from the viewing ramp. Since I was at the hide by now I did stop and have a quick look but only a few common ducks and gulls to be seen – no sign of the spoonbill.
On arriving at the ramp there were about 20 people in residence and none of them were looking down their scopes – never a good sign. The ring neck had just disappeared down one of the channels in the reed bed. After  half an hour some of the throng started moving towards Denge marsh (me included) hoping it would show in the more open water but I’d only gone 200 yards when the earky leavers started coming back – it had been seen and was now moving back to where it started.  When I got back to the ramp the bird was already there but was tucked up close to the reeds sleeping and that’s the way it stayed for the next hour or so. It did occasionally look up, have a quick preen, then settle back down – this was when I grabbed a few shots. 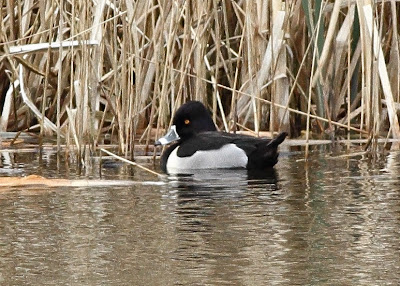 Whilst hanging around the ramp a few bearded tits were seen but only flying away and a pair of gt crested grebes shaped up looking as if they were going to display but changed their minds and went back to fishing.
Eventually I gave up and wandered off but there was little else to see. A few sedge warblers were singing as were the Cetti’s but I couldn’t find the great white egret.
On the way out I stopped at the farm house and spent some time with the tree sparrows. The feeder is now empty but they continue to frequent the scrub in the feeder area. 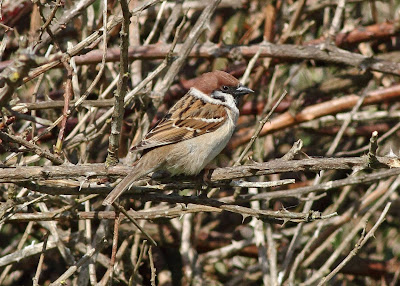 Posted by Greater Kent Birder at 20:33