A Decent Day at Sandwich

Today ended up a good day.  Actually it started very well too.
Today we went out onto Worth Marsh and within 5 minutes of leaving the Obs we’d had a female ring ouzel and a lesser whitethroat (both year ticks).
The footpath up to the train gates was not actually alive with birds but it did provide common whitethroat, yellow hammer, reed bunting and bullfinch. It was after that that it quietened down significantly with Worth Marsh itself only providing sedge and Cetti’s warbler.
On the return leg we saw the ring ouzel again (in the field this time rather than deep in a bush) but it immediately departed for the hedgerow so no pictures.
The drive home provided the only photo opportunity in the form of a grey partridge. There was actually 2 of them but they were too far apart to get both in shot.

Given the sunny afternoon I decided to go back and look for the short eared owl that been hanging around a week or two. I’d actually been down earlier in the week arriving about 6.30 pm and saw nothing even though it had been photographed earlier in the day (16.42 actually). Well today I got there at 17.00 parking at Mary Bax and it was already hunting the rough field to the left of the Ancient highway (driving north).

It hunted this field for at least 30 minutes but never came close. At times it slid across the road and hunted in front of the sailing club and even had an excursion down to the scrape but it always returned. During one of the periods it was hunting in the distance a grey bird went past low. Everyone’s initial thought was sparrow hawk but it landed 40 yards away – it was a cuckoo; another year tick. It didn’t stay long and flew off into a bush on the bank of the owl field and we went back to concentrating on the owl
At one point the owl landed on the track that goes from the road to the turf field and sat there for 15 minutes looking around and at anything that flew overhead – it paid particular attention to the herring gulls.

There were 2 of us there (both with cameras) so we decided to try and get closer taking shots as we went. We were about 25-30 yards away when the owls took to the air (I assume it was us it responded to) but instead of flying away it immediately started hunting and flew past us at 20 yards or so and started hunting on the golf course. 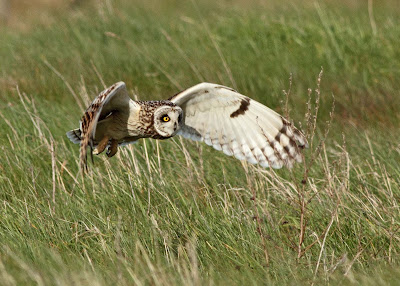