I’ve just got back from a week in Port D’Alcudia, Mallorca, and my next few postings will discuss what we managed to see whilst there. My wife and I went with friends, Pete and Mary, and each day followed a similar format – I’d go out at first light (approx. 6.45) close to the apartment block which was on the edge of town and so had access to a few areas of scrubby waste land and the adjacent farmland.
Travel wise the cunning plan was to get to Palma at midday soas to give us time to have a look around (plus some birding?) before we had to think about dinner. Well things didn’t quite work out like that. We were at Gatwick by 6.30 for an 8.30 flight but the plane was nowhere to be seen. Just where it was we weren’t told. One eventually turned up but it was around 1.30pm before we took actually off. As a consequence we arrived in time to go out for dinner in Port D’Alcudia but little else.
Sunday dawned overcast and cool and I went out around 7.00.I had a pleasant first session with spotted flycatcher, Cetti’s and Sardinian warbler, stonechat and nightingale. At one point a male stonechat and Sardinian warbler  were on the same twig only a few inches apart but they didn’t hold the pose long enough to get a shot. The light was rubbish though so I suspect the pictures would have been also.
Around 8.15 Pete called to ask where I was so I returned to the apartment and we drove off to S’Alberfera which was only 5-10minutes drive away.  On arrival the gates were locked – the opening time posted wasn’t until 9.00 - and being honest citizens we didn’t climb the gate but went out on the jetty on the opposite side of the road (es Pont dels Inglesos) to see what was there. (I now believe the chain over the gate can be lifted off and you can enter before the official opening time but I didn’t know this at the time).
As we walked along the jetty we flushed a common sandpiper – one of many we saw – and at the end we could see an shag so went to get some shots. The local shags are of the race desmerestiiand this juvenile was very pale under and the beak was incredibly long so it does look very different to ours:
Whilst watching the shag I noticed something move on the jetty between us and the shag – a Kentish plover!!!! Now I know they were supposed to be pretty abundant in some areas of the island but I didn’t expect to find one so soon. It allowed us to get quite close but we were shooting into the sun. Eventually it had enough of our approaching and it flew past us and landed inland of where we stood. Again we got some shots before a few local fisherman flushed it where upon it returned to where we had first found it. 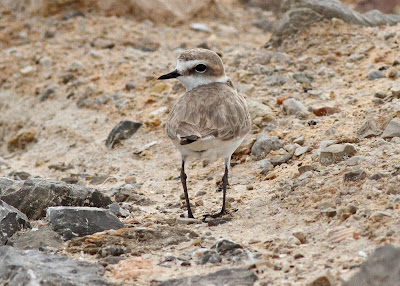 By now the reserve was open so we started walking along the entrance track. Cetti’s were everywhere as were nightingales and Sardinian warblers along with a reeling Savi’s warbler way out in the reed bed. Also along the way we heard a great reed warbler and saw a red crested pochard.  A little further along I saw my first ever purple gallinule and just where the entrance track leaves the bank of the Grand Canal we could see a heronry containing cattle and little egret plus night and squacco herons(x2). At the visitor centre we picked up a map and since we didn’t have long we decided to only walk the purple trail to a couple of hides which overlooked some shallows /mud and would get us quite close to the heronry again but I could only get a shot of a cattle egret.

From the hides we could see loads of black winged stilts, little egrets and Kentish plovers – they seemed to be everywhere. Also out there we had 7 curlew sandpipers , several of which were in summer(ish) plumage, a stone curlew (life tick), and a number of common sandpipers plus redshank(1) and spotted redshank(4) and a greenshank.  Quite a way off there were 3 marbled duck(another life tick)  but they swam to the scrubby bank and disappeared. We did see them a little later but only as they flew further away .

﻿﻿ ﻿﻿
A pair of common terns looked as if they were about to nest opposite the hide and 5 little terns flew about for a few minutes never to be seen again. In fact these were the only terns we saw all week.
On the raptor front we saw several marsh harriers and an osprey started to come towards us but veered off before we could even get a record shot.
Then the heavens opened and with the wind blowing into the hide we had to shut up shop and wait it out. It took a couple of hours before we could finally leave (we didn’t have coats of course, we were on holiday!).
On the return walk we heard a couple of moustached warbler though none were seen. By now it was lunch time – we had been asked to stop at a supermarket to buy breakfast but the rain had put paid to that so we got lunch instead.
It continued to rain on and off for the next few hours but late afternoon it finally stopped and the sun came out. The women went to the poolside but Pete and I decided to explore the coastal strip of the Alcudia peninsula. We didn’t find the hoped for gulls but out towards sa Bassa but I spotted something moving on the mountains of sea weed that lined the shore line (fortunately it didn’t smell). It was a spotted flycatcher! I got several shots of it on the weed but then it decided it wanted to help me out so landed on a stick just a few yards away! 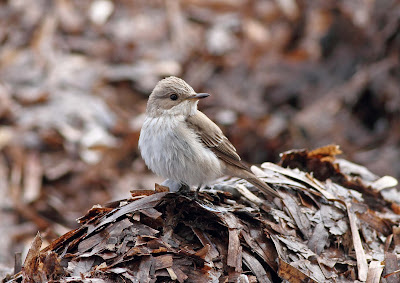 The Balearic form of spotted flycather is different to ours in that it is smaller and is almost pure white underneath.
After that we tried the other side of the peninsular out beyond Bonaire. I don’t know exactly where we were but just after an old metal bridge we stopped and there was an adult shag on the rocks, a blue rock thrush landed. We continued along the road seeing spot flys everywhere then by the only beach side café out there we found 3 Audouin’s gulls (life tick) and eventually managed some reasonable pictures. Then time for home and something to drink!!!!!!

Posted by Greater Kent Birder at 16:54