Out at 7.00 again and a wander around the local lanes. The Sardinians were near the horse paddocks again and further along I found a serin and a couple of spotted flycatchers (plus the usual sparrows/Cetti’s/greenfinch/nitghingales etc). Out in some farm land there was a corn bunting and 3 or 4 zitting cisticolars were bouncing around.
Around 8.00 Pete came out so we went to the Boquer Valley. This was supposed to be one of the highlights of the trip but in reality it was disappointing. As we parked we saw a pair of stonechats and a small flock of goldfinch and as we went past the Villas we found a garden warbler. As we started to climb we started seeing and hearing Sardinian warblers – something that abounds in the valley. The sound of something different singing caught our attention and we spotted a superbly marked male cirl bunting singing his merry little head off and a little further along we found a blue rock thrush though he didn’t want his picture taken.


At one point 3 raptors cruised along the far ridge - 2 of them were booted eagles – one pale morph (white with black primaries) and one dark phase bird, the third remains unidentified. These were the only raptors we saw in 3 hrs. Because of my lack of knowledge of the calls/songs of these birds we stopped to investigate any Sylvia warbler singing (I use the term loosely) so continued to see Sardinians all the way along and eventually one posed brilliantly but didn’t see anything we could call a Balearic/Marmora’s warbler. 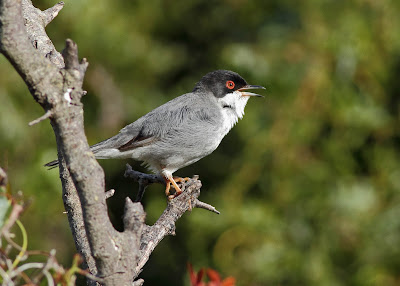 Whilst we were searching for the Balearic I did spot a very distant hoopoe but stupidly took my eyes of it to try and direct Pete onto it and couldn’t find it again though it did call a few times. It’s remarkable just how well they can blend into the background.
On the way back we had 2 ravens circling.
Here are 2 views of the valley. A stunning place just sad about the lack of target birds.


I don’t know if we got there too late in the day (we arrived about 8.30) or whether we spent too much time getting to the seaward end of the valley where it seems the Balearics live but overall it was very disappointing – no raptors to speak of, not a single hirundine of any description, no migrants.  We were probably too late for the migrants but I had hoped for a little more cooperation from the resident species.
Still the weather was nice.
Posted by Greater Kent Birder at 14:49