Today we decided to have a second go at Son Real but this time early in the morning in the hope that we might catch the Balearic warblers singing hence easier to see. We were out of the apartment by 6.00 (still pretty dark) and by 7.00 we were in the low scrub bordering the beach. As we arrived at Son Real there were 5 red legged partridge in the tilled field and we could hear a cuckoo (the first of the trip) off in the distance. We conducted a quick survey of the fields but no sign of of a stone curlew – allegedly common in the area.
Once near the beach we wandered back and forth for a couple of hours seeing Thetkla lark, tawny pipit, a Kentish plover and a host of Sardinian warblers but no sign of a Balearic (or Dartford warbler for that matter). I did spot a one interesting warbler but it was off before I could get a good look at it – it was either a common whitethroat or spectacled warbler.
Eventually we gave up and making our way back to the car and on the way we saw several woodchat shrike.
In the taller scrub, where pine trees start (albeit sparsely), a couple of warblers dropped into the scrub only feet from where we were standing. After a few minutes first one then the second showed themselves – Balearic warblers!!!!!!!! Pete got some decent pictures of the female which was collecting cobwebs and we both got poor images of the male deep in a bush. The pictures were poor quality but you can clearly see what it was. 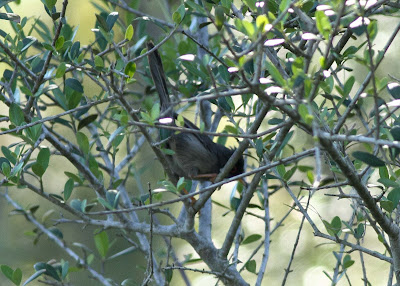 Near a rest area/picnic table a hoopoe flew past giving great if fleeting views and another woodchat shrike sat in the top of a dead tree.

On the way home we decided to stop off at the Depuradora view point of the S’Albufera marsh. We couldn’t find it at first and went down the wrong road but this was quite a beneficial mistake as we saw 4 bee-eaters - the main reason for going for going to the Depuradora.
Eventually we found the view point but didn’t see any bee-eaters there. We did see a flock of 7 ruff and 2 common sands fly past though. The only other birds of note were the marsh harriers - probably 8 or so were flying about.
We went back to the first road we had gone down to try and reconnect with the bee-eaters. We did see some 8-10 but always distant. We were later told there is a breeding colony on the S’Albufera reserve (down towards the Depuradora area) – I just wish someone had told us when we were there.
The afternoon was spent lazing around the apartment/poolside and whilst trying to get some pictures of the swifts and swallows a purple heron flew past (as did numerous little egrets and yellow legged gulls).

Posted by Greater Kent Birder at 00:07