The post for the 9th will be in 2 parts due to us having a pretty good day both with the birds and the camera.
Morning session:
One of the areas I birded before Pete managed to stirred himself was an area of scrub, pines, rubble and old tarmac that had been left behind when the new roads had been built. Normally it had several spot flys in residence plus a small flock of serin but today it also had a hoopoe. I heard the hoopoe from some distance so made my way slowly along the old road hoping for a photo opportunity.  I was under the last pine when it called again – it was about 10 feet above my head. I tried to back away so as to get a shot but it was off and that was that, opportunity missed.
At 8-ish Pete arrived and we went to Son Real.  Son Real is an old estate just east of Can Picafort that is now being preserved as a nature reserve with a visitor centre. Several walks are set out in the reserve and we took the shortest one that went direct to the sea. The first part of the walk is through farmland but you soon go into a pine covered area which then thins into scrubby garrigue which is supposed to house Balearic, Sardinian and Dartford warblers. The coast is rocky and is said to house Thekla lark and the occasional tawny pipit.


As we left the car park we immediately started seeing birds, common stuff mainly but also serin and with distant hoopoe calling. It was certainly the birdiest place we had visited.  As we entered the pine woodland we started seeing/hearing dozens of nightingales and seeing a lot of spot flys . A little further inland the trees thinned somewhat and it was predominantly scrub. Plenty of warblers were making noises so we looked at all those we could. Unfortunately most were Sardinians.  However we stood around for a while as plenty seemed to be going on. This proved to be a good call as whilst looking for a corn bunting we spotted a woodchat shrike and a few minutes later a Balearic/Marmora’s warbler popped up (a life tick) and rapidly disappeared into some low scrub a few feet away. Both of us noted the blue-grey mantel and dark underside and a few minutes later a female gave similar views ( ie for about half a second). This too was a dark bird but without the blue-ish tint and with very noticeable orange-red legs.
We saw several woodchat shrikes on the estate. The local woodchat shrike is of the badius subspecies as is noticeably larger than those I saw in Donana and lacks the white patch at the base of the primaries:
We soon moved onto the coastal garrigue because this was reported as the prime site for Balearics. Here we saw a lot of Sardinians and a hoopoe flying away with another calling but no Balearics. Though we did see a couple of stonechats which were incredibly dark – unfortunately no pictures as they were always into the sun. As we reached the more open slopes leading down to the beach we spotted a lark – the first lark we’d seen in the trip – and getting closer it was clear we had found a Thekla lark (a second lifer). There were several there and the next 30 minutes was spent trying to get close enough to get some decent images but I was always shooting into the sun.
Eventually the birds disappeared so we wandered along the beach hoping to relocate them when we came across a female black redstart then a tawny pipit( lifer number 3).  At first the tawny was on some scrub and too distant to lock on but them it landed on the fence and we managed to get close enough some reasonable pictures.
A few minutes later we had 2 of them chasing each other around but they disappeared into the beach side scrub and rocks so we crossed the fence via what in Mallorca constitutes a style  (think of 2 small ladders linked at the top like an A frame and all made of branches) and went after them. We soon relocated one in a rocky area and moved closer for a picture. As we stood there clicking away the bird started hoping and walking towards us getting to within 10 yards or so and catching a caterpillar as it came. 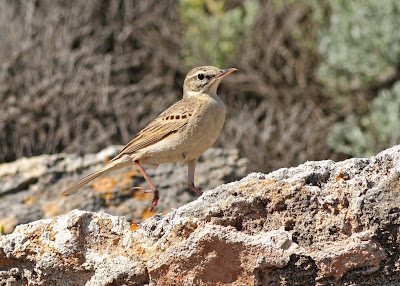 We were just about to pack up when I spotted what at first instance I thought was going to be a house martin – dark bird, white rump – then the coin dropped it was a pratincole ( the views were not great so I assume a collared).  A quick holler to Pete got him on to it but all he saw was it flying off away from us. We stood around for a few minutes hoping it would return to allow a few shot but no such luck and we returned to the car. However we weren’t finished.
We had just left the Son Real car park when I noticed something on the telephone wires. From a distance I could see a orange-brown back and was expecting a kestrel but as we got closer I could see a blue head – Roller I screamed (life tick number 4 for the day). Now due to Pete’s rather heavy right foot we hurtled past the bird so a few hundred yards along Pete had to do an emergency U turn. Luckily it was still there when we got back so Pete got to see it. Unluckily (or should I say predictably?) as we stopped it flew off so all I got was a fuzzy inflight shot of it disappearing over the horizon but you can see the orange-brown back and blue in the wings.
﻿ ﻿
We then went back to the apartment for a late breakfast......now that’s what I call a productive morning.
Posted by Greater Kent Birder at 12:04