We had to get out of town early because of an Iron Man race which meant a lot of the roads were to be closed from 8.00 to 8.30 (depending on location). We decided to go to Porto Colom – it seemed to offer somewhere to look around and somewhere for some birding.
We got to Porto Colom at 9.00 and after a coffee and breakfast Pete and myself went to the peninsula . It was supposed to have Balearic warblers but to be honest we didn’t see too much. There were a good head of stonechats in the scrub and on the stony ground near the sea we found a few Thekla larks and a tawny pipit. There was absolutely nothing on the sea – no gulls, no terns, no nothing.
We didn’t last long out there (the temperature was around 28-29C) so we went back for a drink and  a leisurely lunch with the ladies. After lunch we visited Castell de Santueri. This is a location that doesn’t appear in  “Birding Guide to Mallorca” but I had read in a report on Mallorca that it had a colony of alpine swifts.

As soon as we arrived we could see the swifts – about a dozen were wheeling around over the valley but always distant. Had the castle been open we could have got a little closer but it wasn’t so we had to watch from the car park. 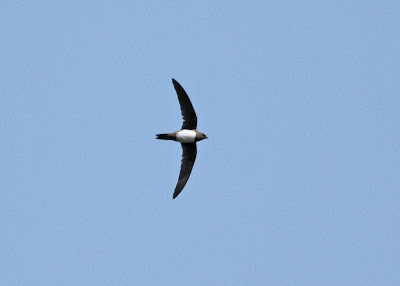 There were some other birders there who told us there was a juvenile Eleanora’s falcon in a hole up on the cliff face so the next hour. This seemed strange  because Eleanora’s breed late in the year to coincide with the autumn passage so it would have to been one of last year’s brood – I had no idea when they attained adult plumage and decided I’d just have to do some research when back in the UK. Whilst waiting for the “Eleanora’s” to show itself a couple of peregrines went back and forth. We also had great views of hoopoe (flying), blue rock thrush (a pair collecting food), gold crest and a few distant crag martins.
Eventually the thing showed and I got some pictures.

It was only when I got home and studied the pictures that I decided the juvenile “Eleanora’s” was in fact a juvenile peregrine. I must admit it was difficult to see much detail in the field – the rock face was very bright and the shadows in the cave very dark; with the aid of Photoshop a more evenly illuminated image can be produced that makes the id easier.

So we managed 5 new birds at this little stop over (alpine swift, crag martin, gold crest, turtle dove and peregrine). I haven’t listed all the common stuff but this was one of the more productive sites we visited so an ideal place to combine sight-seeing with birding (assuming the castle is open).
Then it was off to the airport and back to the UK. We landed at ~10 pm arriving home at midnight and 4C - a bit  of a shock to the system.

Posted by Greater Kent Birder at 17:13