Upupa epops - Hoopoe to you and me.

My day started at the Elms which yielded a few chiffs but little else then as the weather deteriorated and the rain started I retired to the scrape and saw next to nothing. A few shelduck and oyster catchers and a lone male white wagtail. Since it was still only 8.30 I decided it was too early to return to the Obs and drink coffee so I went home to do some chores.
At 10.30 or so I went back to the Obs to drop off some proof reading I had been doing. We were sitting around drinking coffee and complaining about the weather when the phone rang – a resident of the estate had found a hoopoe in their garden.
3 of us immediately gathered our stuff and went round to the house where the owner invited us in. A 4th arrived a few minutes later.
It seems the hoopoe was first seen only a few yards from the house but by the time the owners had identified what it was (they were not birders) and phoned the Obs it had wandered away from the house and was foraging under a leylandii hedge. 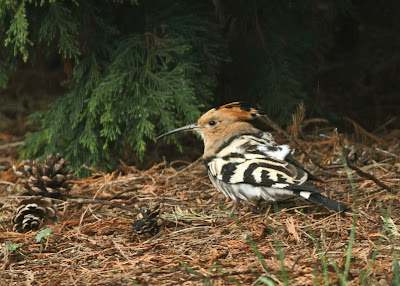 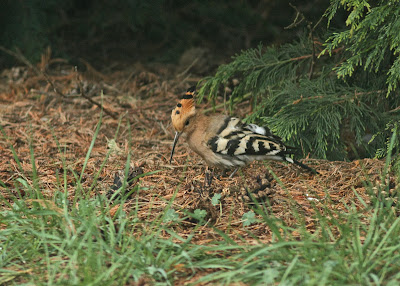 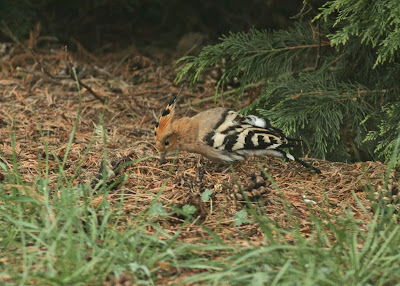 I took a number of photos as the bird worked its way down the hedge (and away from us).  The light had not started off very good (1/160th at ISO 1000) but as the rain intensity increased the light got worse and by the end I was down to 1/80th at ISO 1600. Needless to say these latter pictures were rubbish.
At one point the bird stopped feeding and had a few minutes shut eye before disappearing completely from view under the hedge. 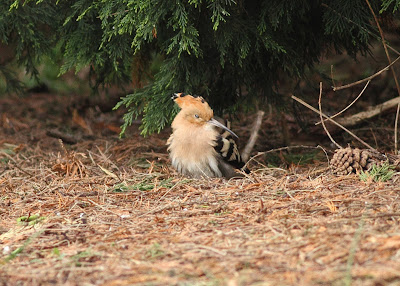 This is where we thanked our hosts and departed.
In the afternoon the rain stopped and the sun came out so we had a wander around the Elms.  The chiffs I saw in the morning were still there chiffing away merrily but we also found a couple of fire crests and blackcaps.
Posted by Greater Kent Birder at 23:15