One of the reasons I started a blog was as a outlet to show record shots that didn’t come to the standard I wanted to put on Flickr (plus letting people know what ordinary stuff was around and not reported on the established birding sites). Thursday provided some images of very good birds that didn’t come up to the Flickr standard.
We had just moved into the Oasis paddock when a raptor cruised into sight. Someone called marsh harrier and I was  thinking it looked wrong for a marsh harrier, the wings being too pointed with under-wing barring  when Ian shouted ”Can you get some shots” .
I stopped looking at it through the bins and picked up the camera. The first few were too dark – I’d (incorrectly) guessed at +1 for the exposure compensation so promptly moved onto +2 and managed a few shots on those settings before it moved out of range. (Photographing a dark bird against a white sky is never easy!). Ian had already decided it was a Monty’s or a Palid and hoped the pictures would clinch which it was. 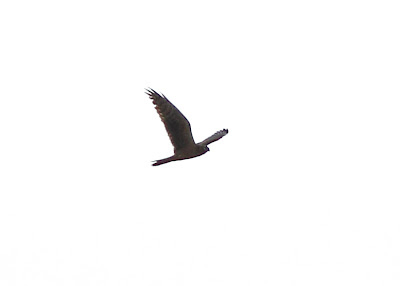 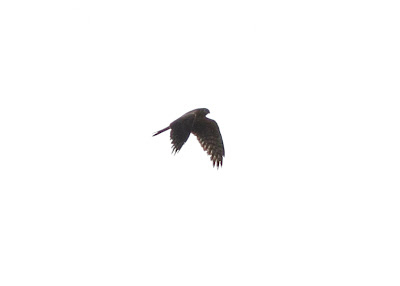 The bird by the time I got the shots was pretty distant and even at +2 they were a little under- exposed but you can see that it was reddy-brown on the under-wing coverts and has only 4 primaries showing confirming it to be a juvenile Monty’s or Palid. The face pattern however indicates a Monty’s – the face is to pale for a juvenile Palid  and the collar insufficiently bold. I’ve attached a picture of the 2011 Sussex juvenile Palid harrier for comparison.

An hour or so later on bird guides a Monty’s was reported at South Foreland showing its progress south was being conducted at a pretty leisurely pace– I wish it has been moving that slowly as it came past us.
We didn’t see much else until we reached the beach end of Kings Avenue when an osprey was seen circling high and inland of us. It did get closer but never close.

As the day wore on all of the more common raptors were seen – kestrel, sparrow hawk, peregrine marsh harrier and buzzard. A pretty pleasing day really.
Posted by Greater Kent Birder at 14:47