27th The End of a Green Woodpecker

I only had a couple of hours this morning so I went looking for dotterel in the stubble fields South Foreland and Langdon Hole. Needless to say I didn’t find any.
In fact I didn’t find much at all other than spooking a pair of yellow hammers off the path and spotting 2 wheatears on the pile of rubble. What I did see as I made my way south was 4 peregrines together over the cliff tops (I assume a family group) but these disappeared in an instant. After giving up on the dotterel I went to the rubble to try and photograph the wheatear and whilst standing there I heard the peregrines again.
I spotted them (only 3 this time) over the cliffs (200 yards away?) and they were obviously hunting something as they seemed to take it in turn to swoop at something. Then the peregrine calling was drowned out by an almighty row – I could see one of them had caught their prey so I fired off a couple of shots in hope rather than expectation. 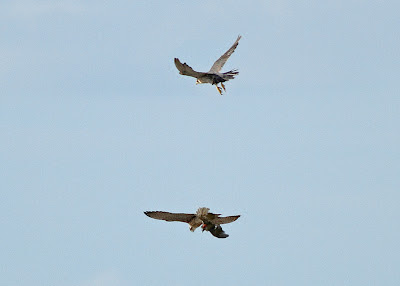 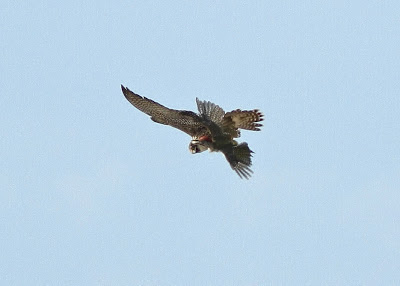 The bird carrying the prey kept dropping below the cliff top only to reappear at the same place so I hurried down the hill to get closer. It again reappeared and I got off a couple of more shots before the bird moved out to sea and drifted off north the captured bird still screaming loudly. 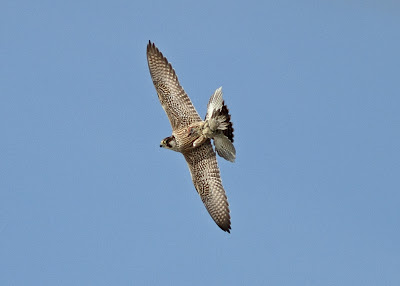 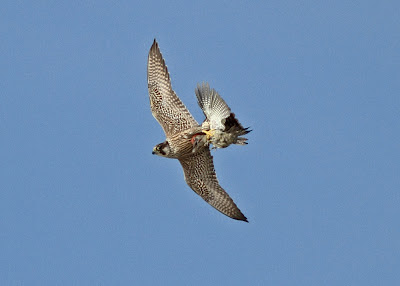 It was only when I looked at the pictures that I saw what they had caught – a green woodpecker which explains the row being made.  I suppose green woodpeckers are easier to chase down than pigeons.
(The delay in posting this report was again due to problems uploading the pictures)

Posted by Greater Kent Birder at 22:21