September and things are begining to look up

1st/2nd.
On Saturday (the 1st )  I had intended to walk along the beach at Sandwich up to the point but as it was overcast I thought there was a chance of a fall of migrants so I walked the cliffs to Hope point and.................. it was useless. Just a few willow warblers, some passing hirundines and 2 yellow wags going south. This was in total contrast to what was going on at Bockhill where they had a shed load of good birds – grasshopper warblers, spot and pied flys, whinchat to name but 4.
On the 2nd I did do the beach walk. I  parked up at Newdowns and immediately contacted a decent flock of small stuff – willow warblers, blue, great and long tailed tits and whilst trying to count these I found a spotted flycatcher. The count was abandoned as I watched the flycatcher. After 10 minutes the tree tops were suddenly devoid of birds so I resumed the walk.
As I reached the beach there was a flock of mippits (~30) and I spotted 4 whinchats in the buckthorn. Using all my will power I ignored the whinchats and walked down to check Prince’s practice green but only found 2 wheatears and another whinchat so I started north towards Princes club house. During the stroll north I flushed ~6 sky larks then re-found the whinchats only by now their number was 10! I tried in vain to get close but they were having none of it so I had to be content with some distant record shots. Also along there was another wheatear and a sedge warbler. 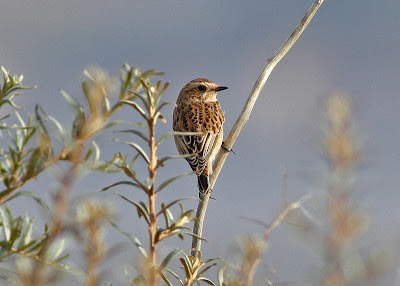 The return leg I saw 3 lesser whitethroats, 2 common and ~5 reed warblers by Princes Reservoir and and a little grebe on the res itself.
Monday I walked the circuit with Ian and true to the last week or so most warbler activity was around the Obs car park. The warblers really do like the hedge row by the maize. Willow, segde and reed warbler plus chiffchaff were in residence this morning.
Middle field, the Elms and Gullies were all very quiet but on the sea front by Sandelands we found a decent flock of whinchats. These were mainly in Sandelands garden but also along the fence lines between there and Dickson’s corner – around 25 were seen. As you would have guessed I tried to get close for some pictures but yet again failed. Whinchats have never been easy to get up close and personal to but this year they are impossible. This was the best I managed:
Back at the Obs I was told there were 3 spotted flycatchers and a dozen whinchats along by St George’s bushes so off I went to try for the whinchats again. Failed! But the spot flys were a little more obliging. 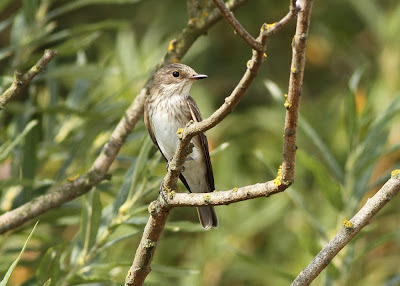 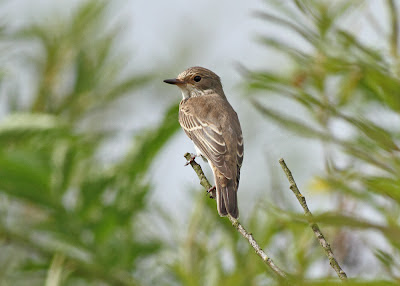 In the afternoon I went down to Backsand – high tide being ~ 2.00pm. The shank counts were pretty reasonable – 48 redshank and 29 green – but they stayed right over by the reed bed and never moved. This has happened on the last 3 visits; I think they just don’t like the water level being so low so roost on the only small island remaining but go back to the river bank to feed.
The only other waders present were dunlin (2), green sandpiper(1) and lapwing (7).

Posted by Greater Kent Birder at 23:57