Yesterday I went to Grove to try and get some bearded tit pictures. I got some but the session was cut short when I got a text from Phil Smith saying there was a rose coloured starling at Samphire Hoe. My tit session (so to speak) was cut short and off I went to see the starling:

Today, being calm saw me return to Grove for a second attempt at the beardies.
Looking into the sun from the ramp all I could see were eclipsed ducks so I didn’t linger and as I walked towards the Feast Hide a party of 7 beardies flew past. At the hide there were 2 green sandpipers, 2 spotted redshank, 3 snipe, a little egret and a number of ducks who remained uncounted.
On the mud and alongside the reeds there was another party of 4 beardies.  I didn’t stay long and progressed to Harrison’s Drove and it was silent; no sign of yesterdays beardies, so I wandered back and forth assuming they would turn up sometime.
After 15 minutes and as I returned to the junction with the main path Mr Ashton appeared and like a miracle so did the bearded tits........lots of them. I don’t know what it is he wears but it really does attract the birds (well at least the feathered variety). Due the birds constantly flitting around it was impossible to do a count but there were at least 60-70 present. I’d like to say they sat there posing for us but they didn’t. At times they were only a few feet away but in general they were out of sight or heavily obscured.
One of the interesting sights was seeing groups of them drop onto the path and peck at the ground – I assume they were taking in grit to aid seed digestion but I don’t have any proof of this.
The closest I got to a one in the open was this juvenile who landed very close and decided it was time for a preen – my experience has been that once a bird decides to preen it gets a lot more approachable; they’re obviously not very good a multi-tasking. 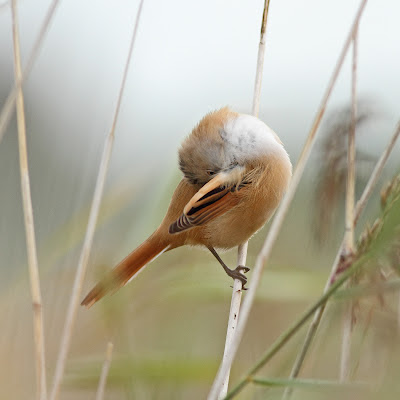 Adult birds were always a bit more alert and the shots a little more distant but today’s efforts were a lot better than I managed yesterday.

Mike G and Bill G joined us a little later but by the time they arrived the birds were drifting away - they seemed to be retreating back into the middle of the reed beds.
Still an enjoyable session.
Posted by Greater Kent Birder at 18:25