Yesterday the house martin migration was in full swing with thousands moving south along the cliffs at Kingsdwon and I read the same was going on at Sandwich though those birds were going north! Today was completely different with hardly a house martin being seen in our walk around the estate. In fact today was hard going with only a few chiffs (~30) remaining around the estate and 4 wheatears on the beach south of the sailing club. The most interesting find was a roost of small waders on the shingle south of the sailing club which comprised of 49 ringed plovers, 15 dunlin and 5 sandling – good numbers for the estate.
I had intended breaking off early and going down to Backsand (again) as 2 pectoral sandpipers were in residence yesterday but that plan had to be shelved because the Conservation team had decided today was the day they had to do some work down there................and I there was me thinking the Obs and the reserves it controls were there for the birds/bird watching. I'll have a look down there tomorrow but it's probably the end of the pec sand fest.
In the end I decide to walk the beach up to the 100 Acre field and IT WAS RUBBISH.
Along the Newdowns track to the sea I found/heard afew chiffs and tits but little else and the beach was more deserted. On land all I found was 1 chiff (in the sea buckthorn), 2 skylarks and 9 mippits whilst on the shore I found a moulting grey plover and on the return leg 2 ringed plover with 2 dunlin. A pretty poor return for the length of walk.
I spent ages trying to get close enough to the grey plover for a photograph but it walked 50 yards in front of me for miles. In the end I had to go inland to close the gap then crawl across the sand o get close enough: 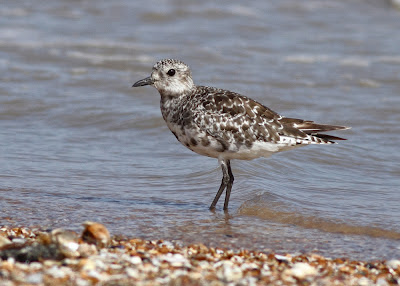 On the way back to the car I found a pair of gold crests in the Plantation – that made 3 for the day; another sign of autumn.
Posted by Greater Kent Birder at 20:51