As I was leaving Grove after the bearded tit session I noticed a couple of warblers moving though the reeds. One was easily recognised as a sedge warbler but the other, on first glimpse, looked more like a chiff (round headed) than a reed warbler. As I watched it a little longer it was clear that it wasn’t a chiff but it also didn’t look quite right for a reed warbler in that it had pale yellow legs and the beak looked too short so I followed it as it moved through the reeds towards me hoping for a picture or two.
It actually got quite close and a couple of times was in the open and I managed 2 shots that were of reasonable quality. I have spent the last few days poring over these pictures and scouring the interweb trying to decide whether it was a marsh warbler that I had seen. 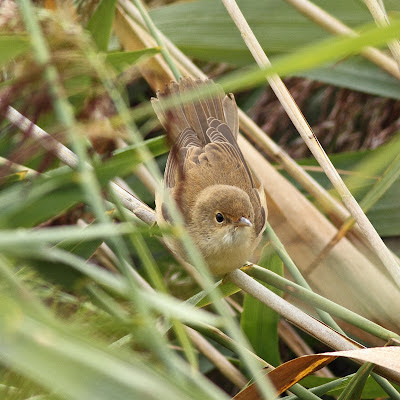 As I said earlier first impressions in the field were round headed, short beak and pale (yellow) legs all of which are consistent with marsh warbler but I was searching for some corroboratory evidence because everything I read suggested these features could be unreliable.  Also marsh warblers are more associated with scrubby areas rather than reed beds.
Marsh warbler also have longer wings and longer primary projection than a reed – all very good but to decide these “relative” proportions as a bird is flitting through the reeds with only a sedge warbler for company is, for me, difficult AND subjective. Marsh warblers are also reported as having white tips to the primaries - a feature clearly visible in top shot.
Searching the interweb provided found an entry on the Portland wed site which suggested  2 features that can be used to separate a marsh from a reed warbler in the hand – the length of the notch on the 2nd primary and similarly the length of the emargination on the 3rd primary.  See http://www.portlandbirdobs.org.uk/bpp_marsh_vs_reed_warbler_310506.htm.
A quick look at the images I took meant that the notch length was not going to be of any use because I didn’t have a picture that showed it, however one of the pictures did show the emargination on the 3rd primary. In a reed warbler the emargination stretches almost down to the secondaries whereas in a marsh warbler it is much shorter only stretching about half that distance.

Whilst it would be easier to see from a side shot I believe this picture shows the emargination of my bird falling well short of the secondaries and being consistent with a marsh warbler.
So there you have it. I think it looks good for a marsh warbler but I'm no authority on this so comments appreciated
The same pictures will appear on my Flickr site.
Posted by Greater Kent Birder at 13:34