I decided that today was going to be a scrape day as the last couple of days, walking the estate, had been pretty dire.
I stopped off at Restharrow on the way to the Obs and had 7 little egrets but the shoveller seen earlier by Martyn had moved off and only teal (~25) were on show. I couldn’t even find the snipe and green sandpiper.
At the Obs I told Ian of my plan and he decided to join me because he too was bored with the normal route and we drove to Newdowns parking at the poly tunnels. We didn’t see much until we got to Newdowns new pool (up by Prince’s Reservoir) where we found a mixed flock of tits and warblers – mainly long tailed tits and chiffs but there was a willow or two plus a few blue and great tits. From there we walked north along the farm tracks which eventually lead to Backsand . There wasn’t a lot to see but the headland areas of several fields contain mixed flowers and had attracted mippits (~10) and linnet (~35) and several great spot and green woodpeckers were heard. Somewhere along the route (I can’t remember where) we flushed 7 grey partridge and found another 7 by Backsand itself.
At Backsand we went to Geoff’s hide (the one next to the “photographic" hide) arriving at 9.30 (about high tide). The green (19) and redshanks(38) were in the normal place and doing their normal thing – sleeping . Other than that there were 4 snipe, a lone green sandpiper, a little ringed plover and some teal. Another wader was seen flying over then it returned and landed with the shanks. It’s id was being debated when it turned towards us – a pectoral sandpiper! This was rather pleasing not just because finding a pec is always pleasing but the main reason for having a “scrape day” was that pec sands were being reported all over the country and I thought we must be in with a chance.
A sparrowhawk flew over putting everthing up and the shanks plus pec sand wheeled around a couple of times before flying across the front of the hide as they went back to the roost.
After a while the pec left the roost island and flew over to the “island” in front of Geoff’s hide but stayed on the far bank. After 10 minutes or so it went back to the roost and Ian departed at that point. I stayed hoping it would come a little closer and hopefully get some reasonable shots.
Eventually it came back to the island in front of the hide and made its way along the far bank past the hides then slowly retraced it steps. It was never close, 30-40 yards? but a lot closer than it had been and I got some pleasing shots. 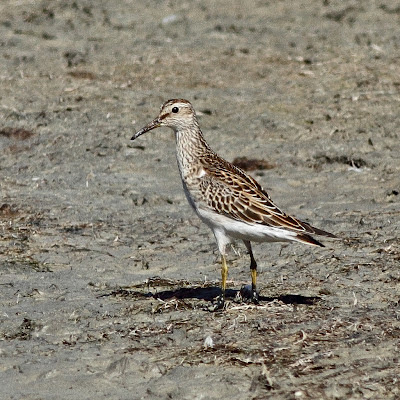 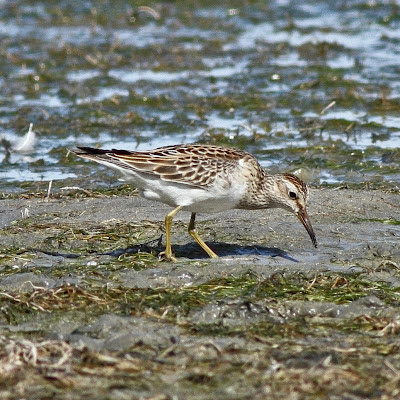 Whilst watching the pec sand a spotted redshank appeared which was another year tick. Again with so little water at Backsand it was always distant (as were the snipe and greenshank that were feeding).
I finally gave up at 1.00pm because the pec had returned to the roost island and appeared to be settling down for a sleep but my good luck wasn’t finished.
During the walk back a hare appeared on the track 60-70 yards in front of me. I dropped to the floor and got the camera out and laid there hoping. I didn’t have to wait long as it started running along the track towards me! It stopped again about 30 yards away and I was sure it would see what I was and scarper but it didn’t – it ran towards me again not stopping until it was 5 or 6 yards away! It was so close I couldn’t get much of it in shot. Hopefully the sequence below will give a feel for what I saw. These shots are not cropped, they are just squared off the full height of the pictures which were shot in landscape (some are not very sharp but should still give a feel for what I saw).


It finally decided I mught be a threat and ran off across the field. I couldn't take any more shots as the card was now full.
Why can’t every day be like today?

Posted by Greater Kent Birder at 19:38