This autumn is turning out as strange as the spring. A week or two back it seemed that autumn migration was kicking off with reasonable counts of wheatears on the beach and a few whinchats by the sailing club. Ditto with the warblers with half reasonable counts of willow and garden warblers being seen (the former also being caught in decent numbers by the ringers). However all that seems to have died away with the wheatears conspicuous by their absence and just a few willow warblers remaining.
Today’s walk continued the downward trend with next to nothing being seen in the bushes, across the golf course or along the beach - we only saw one mippit today during the whole walk. The scrape provided a welcome break from the mediocrity in the form of 3 green, 1 wood and 1 common sandpiper plus a snipe.
The snipe in fact spent the whole time in front of the hide (though often hidden) with both the wood and one of the green sands also coming close:

After the scrape we took in the Elms (just a couple of willow warblers) then I lost the others and checked out Middle field. After trying, and failing, to photograph an emperor dragonfly over the pond  I stopped in the small copse where I noticed a couple of birds moving in the canopy – one was a willow warbler and the other a pied flycatcher.  After waiting 20 minutes or so the pied fly finally came into the open and I managed a few shots. 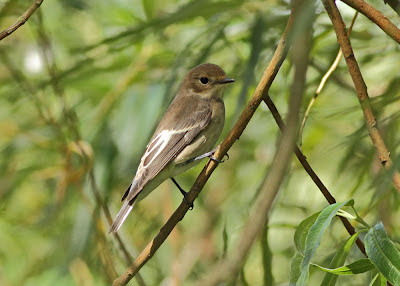 After a coffee at the Obs I was going to check out the Elms again because a Ian had found a southern hawker in there when Martyn "B" Wilson turned up so I went back to Middle field with him.
As we entered the copse the pied fly showed immediately then disappeared but this time Martyn spotted there was a wood warbler with it - turned out to be 2 year ticks for Martyn!. Over the next hour or so the wood warbler showed quite well in the trees above and around us but getting it in the open clear for a shot was tricky though a couple of record shots were achieved. 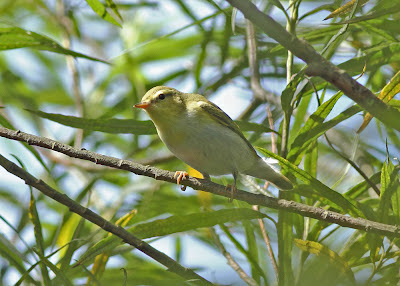 As I said at the start it’s a strange autumn – next to nothing around then something good turns up. Not up to the paddyfield I know but very welcome none the less.

On the subjecy of the Paddyfield, Ian sent the images to the Dutch Birding authorities who endorsed it being a Paddyfield. Perhaps it will feature in the official records after all.
After 48 hrs and 4 or 5 attempts I have finally managed to upload some images. I have no idea what was the problem and how it has been resolved.

Posted by Greater Kent Birder at 06:36