Today we went to Brufut in the morning, Tanji Bird Reserve for lunch with the afternoon spent on the beach at Tanji. I tried to condense what we saw into one post but the number and variety of birds seen meant the post would be too long so to prevent boredom setting in (in me as well as you) I have decided to split it into 2 parts. The second part will be just about the Tanji - TheBird Reserve Eco -lodge and the beach..

This turned out to be an good day for birds and an excellent one with the camera and whilst I didn't get good shots of everything I saw I was pretty pleased with what I did manage.
Arriving at Brufut the coach had trouble passing the piles of rubbish accumulating on the tracks to the woods -a significant increase over the last 12 months. Heaven only knows why so many Gambians have a total disregard for their local environment and are content to live among piles of rubbish. Anyway by taking a short detour we got there and parked up beside the rubbish dump and immediately got onto an African green pigeon. 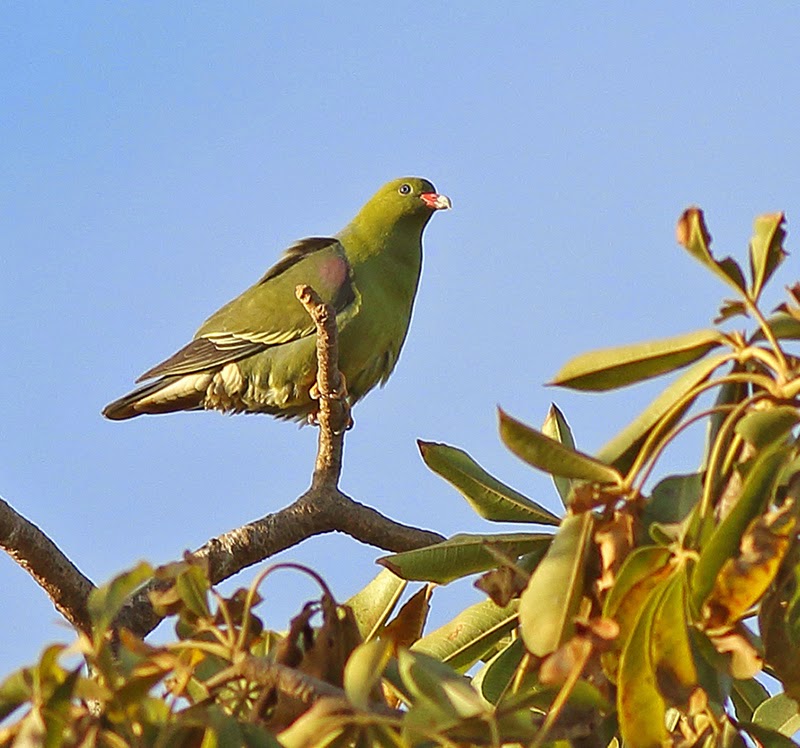 After that we wandered down a track a few yards and entered a field surrounded by a tall hedge and wall. There were birds constantly moving through the hedge. The bulk of the team settled in a place where they could scan a lot of the hedgerow but I moved to one corner (out of sight of the others and with the light behind me) where I would be closer to the birds  - most of which seemed to use the same couple of perches. Here I had sunbirds (splendid, variable and beautiful that I know of), yellow fronted canary, indigo bird, African silver bill, paradise flycatcher, northern black flycatcher, lavender waxbill. Overhead several lanner falcons were seen though always quite distant.


In two of the pictures above the birds are feeding on the red flowers. I don't know what the bush is called but it is a favourite feeding place of the small finches so if you find one it's well worth hanging around for a few minutes waiting to see what turns up. Another very popular tree is an acacia with the sunbirds being particularly fond of these.
After half hour or so we moved on seeing violet turaco (flying) and, eventually, a singing cisticola. We then we stopped at a fig tree for 15 minutes and got good views of yellow-throated leaflove, Senegal parrot, and copper sunbird.  A little further along another stop gave us bearded barbet, a Western Bonelli’s warbler, and another yellow-throated leaflove.

Moving on we found a swallow-tailed bee-eater which allowed us to get quite close considering the number of people trying to get photographs and then, in the same area, similarly good views of a lizard buzzard.

A few minutes later we all got absolutely fabulous views (and pictures) of the lizard buzzard which had moved to a new, more open location and it seemed totally indifferent to our presence and the noise of our cameras. It just sat there looking around as we all clicked away.

Our next port of call was to see a pair of roosting white-faced scops owls but the views were very obscured then we were shown long tailed night-jar. There were 2 asleep under the bush but I could only get clear views of one of them. This bird seemed a lot lighter in colour than the one I saw last year.


We had a quite a long stop at a refreshment stand (lemonade etc) the forest rangers have set up and whilst there a green turaco threatened to come down to the watering stations. However I think there were too may of us for it's liking and it stayed high and partially obscured in the trees.


Our final notable birds in Brufut came in the form of a pair of cardinal woodpeckers - the female in their hole and the male moving around the tree top, eventually settling down for a preen. 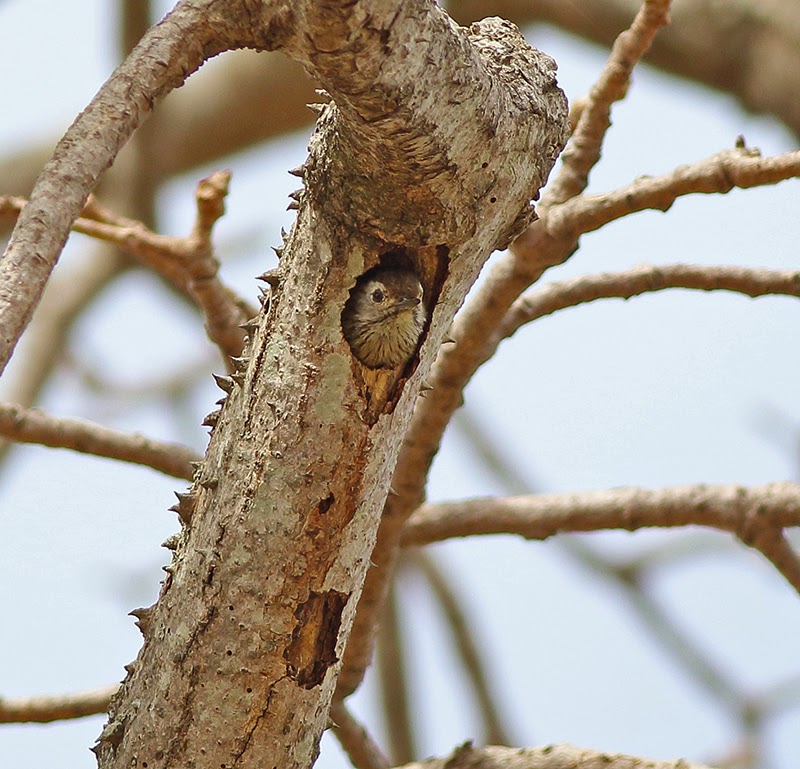 All in all an excellent morning.

The second part of day 4 will be covered in s different posting.

Posted by Greater Kent Birder at 15:14