Normal routine again today – the rifle range at Kingsdown then .
Still no sign of any migrants on the rifle range but the kestrel still provides a few photo-opportunities.
The tour of the estate at Sandwich got off to a good start as we spotted a  swallow  flying north over St Georges golf course (a year tick for me) but soon things settled into the normal routine – a few mippits, skylarks and reed buntings  but no viz mig to talk of.
The sea front did not provide the hoped for wheatear though there were 4 eider and about a dozen gt crested grebes on the sea and on the sand (the tide was way out this morning) there were a few waders in the form of dunlin, ringed plover, turnstone and a lot of oyster catchers.
By the sailing club we found the black redstart that was first spotted yesterday but it soon disappeared and we couldn’t re-locate it.
We walked south along the beach then inland to the Chequers where a lone tree sparrow was spotted in the gardens and 24 lapwing were in the adjacent field but there was little else of note other than a sparrow hawk out on Worth Marsh.
On the walk back to the scrape there were a couple of “singing” corn buntings and the scrape held teal, mallard, tufties, shoveller, little grebe, coot, moorhen and Canada geese – no sign of the barnacle goose however.
The shoveller gave a fly-past and a lapwing walked within a few feet of the hide.
We checked out the Elms but it was very quiet - just a few tits and 2 great spotted woodpeckers.
The photographic highlight of the day was on the corner of Kings Avenue where we found 6 goldcrests in conifer. They then moved into the hedgerow allowing some decent images to be obtained. 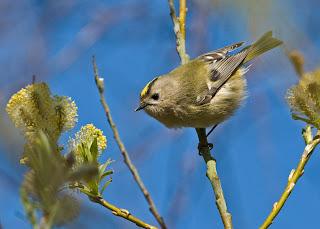 Last spring goldcrest were like hen's teath on the estate with firecrests being far more abundant; this year it's totally the opposite. Ours is not to reason why........
Posted by Greater Kent Birder at 20:54