22nd - A scrappy day due to chore/errands.
As normal for the last couple of weeks I started on the rifle range but all I got for my troubles were fleeting vies of peregrine and kestrel; the black redstart seems to have disappeared and nothing else (and I mean nothing) has turned up.
Back home by 8.00 but the carpet man arrived earlier enough for me to pop down to Kearsney.
No sign of the yellow wags alongside the ornamental lake but there were a decent variety of ducks at Bushy ruff so I sat on the bench and enjoyed the sun.
The coots were their normal belligerent selves but they were fighting too close for me to get a picture. I did try to get some flight shots but this "landing" was the most interesting shot  I managed.
2 pairs of gadwall were present but they refused to come close and 2 little grebes did likewise.
There was one strange looking duck out there – I assume a hybrid but of what is anyone’s guess – it was a big lump.
Whilst sitting there 2 buzzards circled high overhead then 2 grey wags turned up.
I got closer to get some images hiding behind the sluice gate. One of the birds walked along the water edge towards me getting very close but nearly always head on – though a few decent images were obtained. 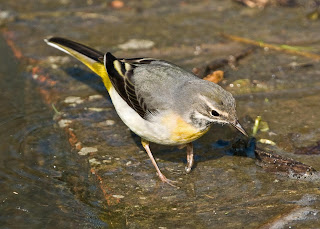 After that it as back home awaiting an afternoon delivery but I did have another visit to the rifle range – no change though one of the kestrels came close.
The 23rd was another day confined to barracks “supervising” home improvements. Well I make the tea and type this whilst others do the working.
I did manage to get down to the rifle range first thing (6.30 am) and although there were no birds to be seen this example of trick parking by this Jag was amusing.
Hardly dented at all!
Posted by Greater Kent Birder at 10:09