Still Scratching around for some Migrants


I started at stopping at Restharrow on the way. At Restharrow I immediately found one of yesterdays Little ringed plovers - it's nice to start the day with a year tick then it was off to the Obs.
After meeting up with Ian  we started the rounds by going back to Restharrow because Ian had missed them at the weekend then we walked the beach to the Chequers.............. still no wheatears!
Actually there was not much at all on the entire walk other than skylark, mippit and linnet with the highlight being ~ 20 goldcrests around the estate – Elms, Little Elms and Middle Field, a lone tree sparrow at the Chequers, and a few white wagtails, one of which showed well at the sailing club.
After lunch I went to Stodmarsh and went straight to the Marsh Hide. Chiff chaffs could be heard from Alder wood and in the hedge rows of the path. This was a welcome sound as we have none to speak of on the coast. A couple of Cetti’s were also heard on the walk out.
At the Marsh hide, as well as Steve Ashton,  there were snipe (~6) lapwing and redshank (2) and an Oyster catcher – somewhat of a rarity at Stodmarsh. On the duck front there teal and  mallard, plus grey lag and coot but no sign of the weekends white fronted geese and no garganey. A lone swallow flew past mid afternoon.
A water pipit showed up pretty soon after I had arrived and eventually moved to just in front of the hide and provided some decent photo-opportunities. The bird was showing a distinctly grey head but the pink flush was still in its infancy. Some of the best shots were when it stopped to preen then had a good stretch of its wings. 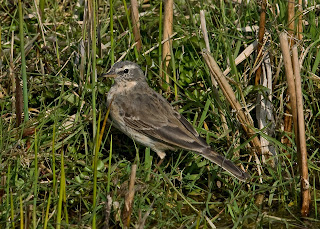 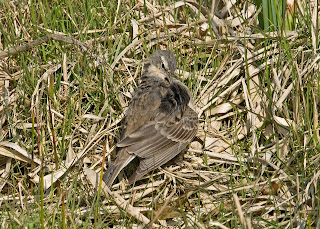 Marsh harriers were regularly seen but most of the time they were very distant.
At one point two birds locked talons which was pretty spectacular but a little too distant for the camera 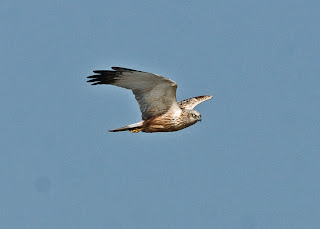 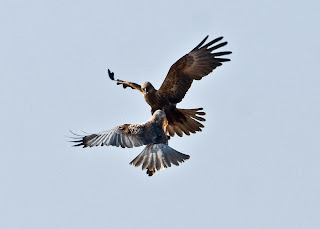 On the way out we heard then found a brambling but it was too distant /obscured to get an image.
Posted by Greater Kent Birder at 17:33