No Migrants but who cares!

All week I have been searching the sea front at and Kingsdown for a wheatear or a black redstart and today was no different.
I arrived at the rifle range, Kingsdown, at 6.45am in bright sunshine. Immediately I spotted a male  kestrel and as I walked south 2 peregrines came into view from the south. I fired off a few shots and although the quality is pretty rubbish you can see from the pictures one of the birds had very worn secondaries.
﻿ ﻿
That was about it other than a few chaffinch, mippits and pied wagtails seen/heard going north but the numbers were very low.
I then moved on to and again searched all the normal places for wheatears etc with the same success as I’d had at Kingsdown. There was one unusual sighting at – a fulmar flying around the beach front houses.
After a brief visit to Restharrow scrape (no change on the rest of the week) I returned to Kingsdown as did Steve Raynaert, who was birding the same sites as myself.
Fog was rolling in by this time and in places was pretty thick however at Kingsdown it was thinning.
At the Rifle Range the kestrel was on a sign post but didn’t allow us to get close and both mippits and rock pipit were seen but otherwise it was much as before.
At the southern most end of the rifle range I had just stopped to have a pee when Steve shouted “peregrine”- it’s timing could not have been better!  I did manage to fire off a few pictures but it’s difficult to concentrate on photography with your trousers slipping down your legs!!!!!!! This was the best I could manage. The bird has a colour ring on it but I can’t read it from any of my pictures.
The bird eventually landed on the cliff face ~200yrds south of the Rifle range and sat there for ages.
Steve gave up waiting but I was determined to try and get some better shots of it now that my trousers had been fastened.
Eventually it came off the cliff face and flew overhead but it was immediately joined by a second bird that came off the cliff face a little north of me. The 2 were flying out to sea when a lot of screaming took place and a 3rd bird appeared.  I lost track of who was whom but 2 of the birds locked talons and spiralled a couple of times before disengaging.
Whilst all this was going on I was clicking away with the camera however the patchy low cloud/fog meant the birds were continually disappearing and undoubtedly prevented some superb shots being obtained. 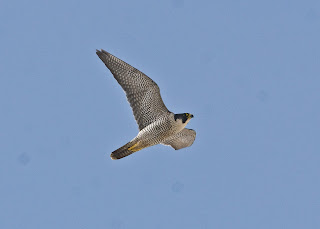 After a few moments 2 of the birds returned to the cliff landing about 20 yrds from each other. 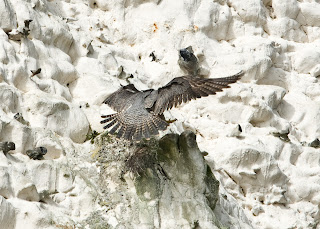 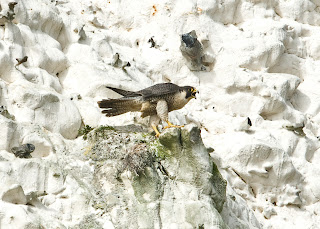 Eventually they flew off – one north and the other out to sea but both were lost from view.
I decided it was time to go home but as I was walking back to the car I heard a kestrel call and spotted it flying along the cliff face. Needless to say I fired off some shots of him! 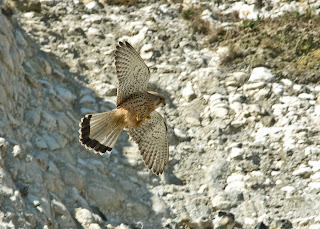 So a good day for the local raptors even if the migrants are staying away.
Posted by Greater Kent Birder at 17:56